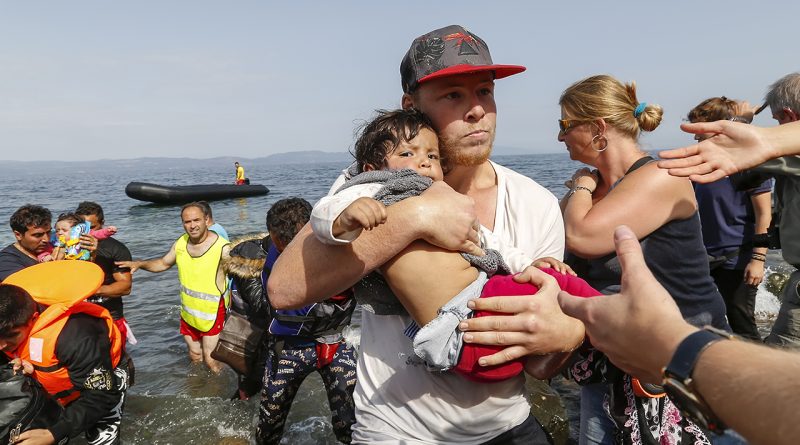 The emotional responses from across society to Wednesday’s terrible tragedy in the English Channel have been unanimous. The loss of 27 desperate human beings at the hands of callous people smugglers and a choppy sea has touched the hearts of everyone, and is raising urgent new questions about how we deal with what has been dubbed ‘the migrant crisis’.

Coming in a week when the government is showing worrying signs of falling apart generally, this latest incident serves to highlight a fundamental moral problem that few legislators have wanted to tackle for decades.

If anything, our government seems to have taken a hostile stance towards migration, especially from the EU. Urgent calls for the creation of ‘safe routes’ for people to reach the UK have been met with a good deal of irrelevant bluster focussing on hitting trafficking gangs rather than the glaringly obviously humanitarian crisis.

UK PM Boris Johnson seems determined to somehow thrash out a deal that will see all migrants crossing the Channel returned swiftly to France, but there is little enthusiasm for this idea on the other side of the water.

As it stands currently, people who actually make it into UK waters will be taken to a British port, and then processed on to a short-term holding centre where their claim for asylum can be assessed. If they’re picked up in international waters ad-hoc agreements are made as to whether or not they’re brought to the UK, or returned to France. (Under international law people have a right to seek asylum in any country they arrive in, not just the first safe haven they escape to.)

An EU Law called DUBLIN III was introduced in 2013 that effectively reversed this and allowed for asylum seekers to be returned to their first country of arrival. The government regularly used this law to return many applicants to source but since our departure from the EU the law no longer applies, and nothing has been created to replace it.

The alternative it seems is to take a blanket hard-line stance against all those seeking sanctuary in the United Kingdom. Home Secretary Priti Patel was due to travel to France this Sunday for an emergency summit of European nations called by President Macron, where she intended to make the British position very clear. Patel has already authorised Border Force officers to use literal “push back” tactics to drive incoming boats back to France, and “offshoring” the processing of asylum applications is under discussion. The meeting has been cancelled after the French reacted badly this morning to the British plans, but the intentions of Britain remain.

A letter from Boris Johnson to President Macron published on Wednesday, also indicates that he thinks the solution to the present problem should focus on ensuring that travellers are “swiftly returned”, supported by a five-point package of beefed up security measures – including joint beach patrols, more advanced technology, maritime and aerial surveillance, and intelligence-sharing.

In the House of Commons this week Tory MPs were even calling for the suspension of the Human Rights Act to enable swift and decisive interventions to return travellers back to France. Former Tory minister of State for Security Sir John Hayes echoed the feelings of many Eurosceptic and pro-Brexit MPs when he said: “People who voted to take back control have every right to ask the question: If you can’t protect the integrity of the borders, what can you control?

Whilst it’s no surprise that a Tory government will be focussed on territorial priorities and economic protectionism, but it’s a tragedy that the recent events in the Channel haven’t softened a few Tory hearts into reconsidering the punitive approach to deterrence. Surely it’s self-evident by now that harsh immigration policies just don’t work in the face of increasing desperation

Ms Patel’s Nationality and Borders Bill, which has been wheeled out in an attempt to resolve the crisis, will also just make matters worse. It will criminalise those fleeing persecution and offer immunity from prosecution to those who breach human rights and the requirement in International law to rescue people in distress at sea

Ms Patel needs to understand that trying to close down routes to sanctuary for the desperate won’t make the problem go away, it will achieve exactly the outcome seen this week – with no safe passage, asylum seekers will be driven into the hands of smugglers and criminal gangs who have zero concern for their safety or dignity. In such situations human beings become mere commodities with a price on their heads – a final dehumanising act of abuse at the very door to safety.

We know that Mr Johnson is resolutely against providing safe routes to the UK. He is said to believe that doing so would simply complete the smugglers’ job for them – they would still take the ferry fee and could even offer travellers a reasonable guarantee of a successful trip across to England and safety.

Thankfully not all Tory legislators share their Prime Minister’s views. Baroness Arminka Helic, a Bosnia and Herzegovina foreign policy expert who became a Conservative adviser after fleeing the Yugoslav conflict of the 1990s, said this week that the attitude of both London and Paris was “shameful”.

“Don’t think of these people as these nameless zombies that are crossing different countries,” she told Times Radio. “They at some point had a home and their children went to school, they had a street that they lived in, they had friends and relatives, they probably played football just like you do.

This is closer to the truth than even Baroness Helic can imagine. There are very few citizens of the United Kingdom who are British – whatever that might actually mean. Fact is, we live in a country built on immigration, right back to the beginnings of time. For all our languages, for all our cultures, for all our loyalties to flags and nations – we’re all strangers here. The deep-rooted and subconscious suspicions that we harbour towards the strangers in our midst are largely grounded in utterly manufactured notions of nationality and sense of place.

It’s an irony that most of the government ministers currently pushing for higher walls against immigration are recent incomers and the direct descendants of economic migrants themselves. Even our Churchillian and ardently nationalistic Prime Minister is an American immigrant.

It’s also worth remembering that the children of newcomers have the potential become proud citizens of their new country, or return to transform their old. Heritage and nostalgia are never lost, but assimilation is a powerful force, and history has tended to show us that countries throwing open their borders prosper more and for longer than those that go on the defensive.

And whilst we’re worrying about being overrun by dubious strangers, it’s worth noting that since 2016 the UK refugee population has actually been flat, so there’s no ‘refugee crisis’ at all. The UK currently has a refugee population below 200,000, whilst France (which has a smaller overall population than the UK) has 400,000 and Germany has 1.2 million.

In an effort to hold this low figure, the UK has recently agreed to pay France £54 million to increase the effectiveness of costal monitoring, and rumour has it that the Home Secretary is planning to put even more money on the French table.

France, meanwhile, is openly dragging its heels and refusing to stop the boats because it believes that people who want to reach the safety of England should be allowed to. On this side of the Channel our key decision makers are scrambling around to sense the zeitgeist, unsure whether welcoming strangers is a vote-winner or a suicide note.

Tragically, whilst legislators on both side of the Channel play this kind of political tennis, the bodies of the innocent will continue to wash up on our beaches.

One thought on “We need to stop talking about migrants and start talking about people if English Channel crisis is to be resolved, by Joseph Kelly”