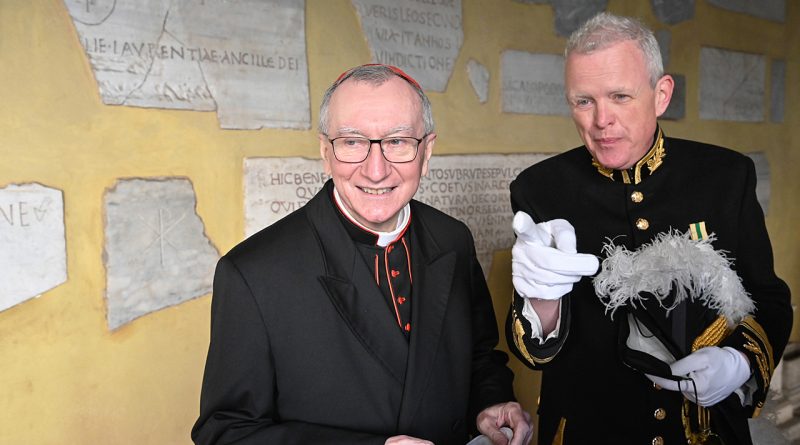 Cardinal Pietro Parolin, Holy See Secretary of State, celebrated Mass in the Basilica of Saint Paul Outside the Walls in Rome to commemorate 40 years of full diplomatic relations between the Holy See and the United Kingdom.

Concelebrating were Cardinal Vincent Nichols and Archbishop Malcolm McMahon, President and Vice President of the Bishops’ Conference of England and Wales respectively.

His Excellency Chris Trott, the British Ambassador to the Holy See, addressed the congregation spelling out the importance of the collaboration between the Holy See and the UK.

Her Majesty the Queen has met five different popes. Her first visit was over seventy years ago when she met Pius XII in 1951 when still Princess Elizabeth.
HE Chris Trott, British Ambassador to the Holy See

Thank you for joining us this morning to mark the occasion of the fortieth anniversary of full ambassadorial level diplomatic relations between the United Kingdom and the Holy See.

I am very grateful to His Eminence Cardinal Parolin for officiating this morning, and to all our concelebrants, including Cardinal Nichols and Cardinal Brady and those who are visiting from the UK and Ireland. I also want to thank Cardinal Harvey and the Monks of the Abbey of St Paul’s, the rector and vice rector of the Pontifical Beda College for their support for today’s event. And our guests for taking time out of your busy schedules to be here.

Of course the history of the diplomatic relationship between the Holy See and the different parts of the United Kingdom dates back much further than the last century. As the presence today of the rectors of the different colleges attests. In fact, the first (English) Ambassador to the Holy See was John Sherwood, later Bishop of Durham, who was appointed in 1479 by King Edward IV to Pope Sixtus IV. He served three Kings, in a relationship with three different Popes, before dying here in Rome in 1494 and he was followed by at least three or four other Ambassadors until relations were broken on the death of Queen Mary in 1558. Going even further back there are records of at least two pre-Norman Kings of England who came to Rome for blessings from the then Pope – Alfred the Great, as a ten year old in 854 from Leo IV, and Cnut in 1027 from John XIX. From the Scottish court, one of the most famous missions to Rome was to Boniface VII in 1301, possibly lead by William Wallace although no one seems sure whether he got all the way here personally.

It is entirely appropriate that we are today celebrating our relationship here, at the Basilica of St Paul’s Outside the Walls – one of the four great Papal Basilicas and with deep historical associations with the United Kingdom that go back centuries. The English King Henry VIII was an honorary cannon here, and St Paul’s is known as the Papal Basilica that above all others celebrates ecumenism and the relationships across the Christian faith.

After the Reformation, relations began to thaw in the 19th century, as Europe sought to rebuild following the Napoleonic wars. It wasn’t until 1914 that the United Kingdom restored its legation to the Holy See, at that time headed by a Minister. And then in 1982, an agreement was reached to upgrade the UK legation to a full embassy and on 1 April the British Ambassador Sir Mark Heath presented his credentials to St. John Paul II. At the same time, the Holy See’s Apostolic Delegate to Britain, Archbishop Bruno Heim, was made the first Apostolic Pro-Nuncio to the Court of Saint James’s.

May I quote St John Paul II’s words to Sir Mark Heath, to explain the significance of this historic moment:

“It serves as a sign of the understanding and good will which characterise our diplomatic ties, and it affords a basis for expecting still closer collaboration in the future.”

1982 marked also St John Paul II’s pastoral visit to Britain, the first time that a Pope had visited Britain. Twelve years ago Pope Benedict XVI paid an historic State visit to the United Kingdom, in September 2010. Her Majesty the Queen has met five different popes. Her first visit was over seventy years ago when she met Pius XII in 1951 when still Princess Elizabeth. And then of course she met John XXIII, followed by two state visits to John Paul II. Pope Benedict XVI was received by Her Majesty on his State Visit in 2010 and Her Majesty then visited Pope Francis when she was last in Rome.

Our collaboration today is ever more important in this interconnected world where it is critical to work together to promote peace, defend human rights, tackle global problems like climate change, modern slavery and all forms of trafficking, and to realise our shared ambition of the sustainable development goals. I mention achieving our joint ambitions, and a recent example of our work together was the Appeal Faith and Science: Towards COP26 signed by Pope Francis with other Faith Leaders from around the world and then presented by the Pope to the COP President. This was the culmination of more than a year’s careful work between our Embassy, the Holy See and the Italian Embassy. The outcome was hugely impactful, influencing the leaders at COP26 but also the creating a great commitment to protecting the environment on the part of the faith leaders themselves.

As we start of fifth decade of diplomatic relations, I am very pleased that we are physically demonstrating the importance we place on our relationship by moving our Embassy, and the Ambassador’s Residence, much closer to the Vatican. Just a cricket ball’s throw from Saint Peter’s Square. This relocation will enable even better co-operation and collaboration on our shared values and interests.

The Russian invasion of Ukraine, and the resulting war and human suffering unseen in Europe since the Second World War, shows us that our joint endeavours are ever more important today. We welcome the opportunity to continue to work together on the resolution of the conflict, the humanitarian impact of the crisis in Ukraine, and then hopefully, before long, on the rebuilding of that beautiful country.

I thank you all for your attendance here today and look forward to seeing what else we can achieve together.