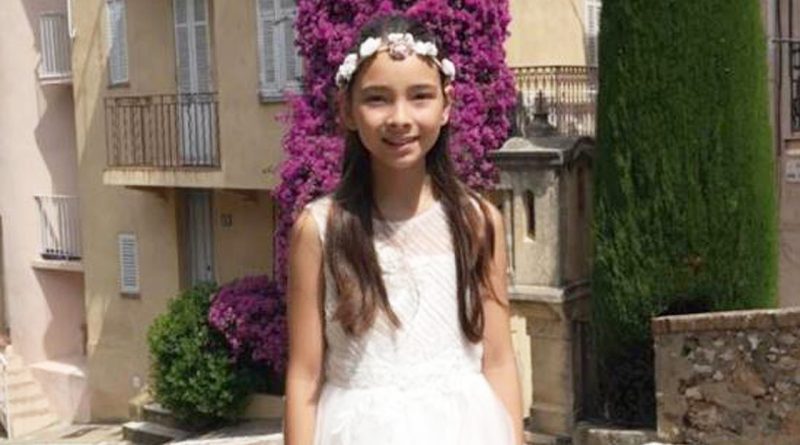 Mayline Tran, from Lyon, was just three and a half years old when she choked on a piece of food. Her father, Emmanuel, explained:

‘She went into cardio-respiratory arrest. I gave her CPR while waiting for help. At the hospital, she had several more arrests, and a pulmonary embolism, before falling into a coma. Ten days later, the test results were disastrous: her brain had stopped working.’

Mayline lay in a coma, hooked up to life-support machines. Her devastated parents had begun looking for a child-sized coffin.

The doctors advised her parents to stop life support. But instead, Mayline’s mother Nathalie, along with students and parents at Mayline’s school, began to pray a Novena to Pauline Jaricot for her recovery.

A miraculous return to life

Soon afterwards, the doctors were surprised to confirm that Mayline’s condition had altered. Emmanuel remembers:

‘Mayline began to show signs of waking up. My wife and I understood immediately that it was a miracle. Despite the doctors’ diagnosis, we saw that her condition was progressing. When she finally said “mom” in the arms of her mother in front of the doctors, the miracle took hold’.

Mayline was released from the hospital in December 2012, fully healed.

Mayline’s miracle has led to Pauline Jaricot’s Beatification, which will take place on 22 May in Lyon,France. This special celebration will be a day of prayer and joy in recognition of a lay woman’s contribution to world mission.

Her vision and passion created Missio’s Association for the Propagation of the Faith, today known in England and Wales through the Red Box, in partnership with the Mill Hill Missionaries.

Beatification is the penultimate stage in the journey to sainthood.

As one of Missio’s founders, Pauline Jaricot is an important figure in the global Missio family. Celebrations, Masses and events will be happening around the world to mark her beatification. Mayline and her family will be joining the celebrations at the beatification ceremony in Lyon. Emmanuel, who has written a book about the family’s experience, says:

‘Of course, Mayline will be with us at the celebration on 22 May. By our presence, we want to make it understood that the power of prayer can achieve extraordinary things. And for those who don’t have faith, we want to testify: some events seem impossible, yet they can happen. It is important to give thanks to Pauline Jaricot and to say that miracles still exist today’.

Pauline: what she can teach the modern world

Pauline Jaricot was a woman of deep and inspirational faith. At a time when women really didn’t have much influence, she set about making huge improvements to the lives of the poorest people in Lyon and around the world. Claire, Missio’s Education Outreach Officer in England and Wales, shares:

‘As well as supporting the missions overseas, Pauline also supported the rights of Lyon’s mill workers, established a credit union, and was one of the first people to build a fair factory – with accommodation, school, and chapel attached.

‘All of this was built on Christ and her relationship with him, nurtured by prayer and the Eucharist. Pauline had a real understanding of the dignity of people, that we are one family through God our Father. She faced many obstacles but never lost faith. She’s as much an inspiration to the Laity now as she ever was’.

Missio’s National Director for England and Wales, Fr Anthony Chantry, shares how Pauline has inspired his own ministry as a missionary:

‘Pauline Jaricot suffered ill health, self-doubt, rejection, humiliation, and poverty, and yet because of her deep faith and spirituality she persevered.  Powered by her passion for mission, the seeds she planted have grown and flourished across the world, producing the abundant fruit of young and vibrant Churches’.

Our celebration in England and Wales

Missio is filled with joy at this special event, which recognises a woman who has shown us that small and simple initiatives, which bring people together in prayer and faith, really can change the world.

You can find more details of Pauline’s life, and download resources to celebrate this wonderful occasion with your parish or community at https://missio.org.uk/Pauline

In England and Wales, Missio will be holding special Masses throughout the year across the dioceses. You can find details of these at https://missio.org.uk/mission-masses-and-events/