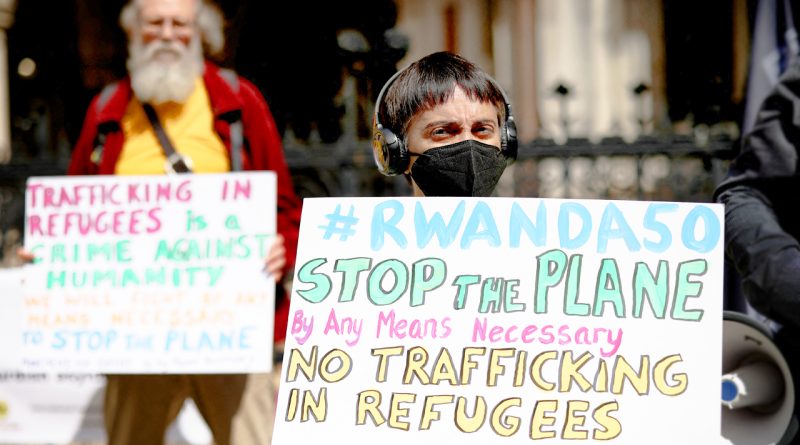 For those who were following developments closely, the high drama of Tuesday evening’s Rwanda flight cancellation seemed at times far more like a film drama than a real-life episode. No doubt someone is already working on a script. But sadly this is a story that is only just beginning, as Home Secretary Priti Patel seems determined to press ahead with further Rwanda flights, despite the plan descending into farce and international embarrassment.

In a tense showdown in the Commons yesterday, shadow home secretary Yvette Cooper delivered one of the most incisive political monologues of recent years, accusing the Home Secretary of “putting the UK to shame” and presiding over a “shambles”.

Shambles it certainly was, but it must have seemed far more terrifying to those unfortunates who were wrenched very forcibly out of Colnbrook Immigration and Detention Centre and got bussed off under high security escort to RAF Brize Norton for the awaiting flight.

As the minutes to departure ticked away, social media was awash with frantic messages reflecting the desperate legal challenges going on in London, set against the hurried demonstrations that were being organised in Oxfordshire.

Well ahead of Tuesday night’s showdown, there had already been desperately shameless attempts by certain sections of the government to daub human rights lawyers as deluded agitators, and on the local election campaign trail last month it was put to UK prime minister Boris Johnson that the Rwanda scheme was already in chaos.

“There are bound to be legal challenges but the migration and economic partnership is something that we agreed with Rwanda. It’s a great deal between two countries, each helping each other”, retorted a typically bullish Mr Johnson.

“Yes, of course there are going to be legal eagles, liberal-Left lawyers who will try to make this difficult. We always knew this was going to happen but it is a very sensible thing”, he added.

“If people are coming across the Channel illegally and if their lives are being put at risk by ruthless and unscrupulous gangsters, which is what is happening at the moment, you need a solution.”

Well, thank God for ‘liberal left’ lawyers is all I can say; they worked absolutely tirelessly against considerable odds to rescue every last refugee from that horrendous flight into uncertainty. Rwanda may have recovered and rebuilt its economy since the 1994 genocide that claimed the lives of some 800,000 people, but it still has a lamentable poverty ratio of more than half its population living on just £1.56 per day. Its human rights record is also less than encouraging – earlier this year the UK government highlighted: “continued restrictions to civil and political rights and media freedom” in Rwanda at the United Nations and called for investigations into “allegations of extrajudicial killings, deaths in custody, enforced disappearances and torture”.

Advocacy groups have also warned that, because of their circumstances, those arriving on government flights will: “likely face indefinite detention under a government notorious for violent persecution of dissent”. That’s why the UK actually offers asylum to Rwandan refugees fleeing this political persecution.

Speaking at Vatican conference on refugees at the Pontifical Gregorian University in Rome yesterday Liverpool-based Archbishop Paul Gallagher, Vatican Secretary for Relations with States, said: “it is necessary to start from the principle of the dignity of persons, from the realisation that we are not dealing with numbers, but with human beings.”

The Lead Catholic Bishop for Migration Issues on the Catholic Bishops’ Conference of England & Wales, Bishop Paul McAleenan, also added his voice to concerns, saying that the government’s forced deportation plans: “is shamefully illustrative of what Pope Francis has called the ‘loss of that sense of responsibility for our brothers and sisters on which every civil society is based’.

“The plan is presented as a humanitarian response to combat people trafficking and smuggling yet the result will compound the suffering of those who are already victims,” said Bishop McAleenan.

“Crime is defeated by confronting the perpetrators not by punishing victims. This scheme will increase the difficulties of those hoping for a new beginning, and it does nothing to address the problems which cause people to flee their homes.”

Bishop McAleenan hits the nail on the head here; the government’s claim that the Rwanda scheme damages the traffickers is pure nonsense. There is actually something quite perverse in a government that is neither supporting asylum-seekers nor confronting traffickers, but is rather resorting to a blunt and delusional commercial device to try and disrupt a brutal business model. It doesn’t take a great deal of intelligence to realise that the threat of ending up in Rwanda will be no deterrent at all to the people traffickers whose interest in their customers ends when banknotes are handed over and desperate people get into fragile boats.

There is regular talk about creating ‘more safe ways’ for people to seek asylum in the UK, but the reality is that it’s becoming more and more difficult to access a safe route, and the government seems intent on further reducing this option. The recent Borders and Nationality Act in particular has reduced the ability of refugees to reunite with family in the UK, and the government has yet to replace the elements of the EU’s Dublin system that allowed people to reunite with family members in the UK. For most refugees, turning to informal and illegal routes are the only ways of seeking sanctuary.

One can only assume that underneath the rhetoric some ministers actually believe that British society is still being driven by old prejudices about the ‘stranger in our midst’, and that clamping down on incomers is somehow going to win votes, and perhaps a General Election.

Reading the zeitgeist has never been a forte of Conservative governments, but this present administration seems locked in a dangerously outdated and jaundiced view of British society. As the response to the Ukraine war has demonstrated, many people are more than willing to open their homes to refugees, and our country is happy to offer support and friendship to those in need, wherever they have come from. I’d argue that British society has become even more welcoming in recent decades, as the concept of ‘global inclusivity’ becomes more commonplace. Our legislators would do well to heed this trend if they want to continue to enjoy the support of their voters.

But it seems we still have some considerable way to go. Yesterday Boris Johnson’s ethics adviser Lord Geidt finally caved in to his conscience and quit, citing that he had been placed in an “impossible and odious” position over a plan to risk breaking the ministerial code on a trade issue. Lord Geidt had already threatened to resign over Partygate, but he said in his resignation letter released today that this latest episode would “make a mockery of the rules” and “I can have no part in this”.

Lord Geidt’s letter ended abruptly, and noticeably without the usual expressions of regret or appreciation: “Because of my obligation as a witness in Parliament, this is the first opportunity I have had to act on the Government’s intentions. I therefore resign from this appointment with immediate effect. Yours Sincerely etc.”

In reply, the prime minister clearly tried to imply that there was some deficit in Lord Geidt, in tones that would be very familiar to any HR executive: “You have carried out your duties admirably under very difficult circumstances. We have discussed the burdens placed on you by this increasingly public role, and the pressures that would be felt by anyone in your position.”

Undoubtedly Lord Geidt was trying to fulfil his remit under extreme pressures, but the post of ethics adviser to the present PM is probably one of the most unenviable positions of the moment. But this is a crisis that goes way beyond the person of the PM – looking at the way the government is behaving in its unrelenting determination to traffic desperate refugees out to Rwanda at any cost, there is evidently a far deeper moral malaise seeping through this administration than anyone could have anticipated.