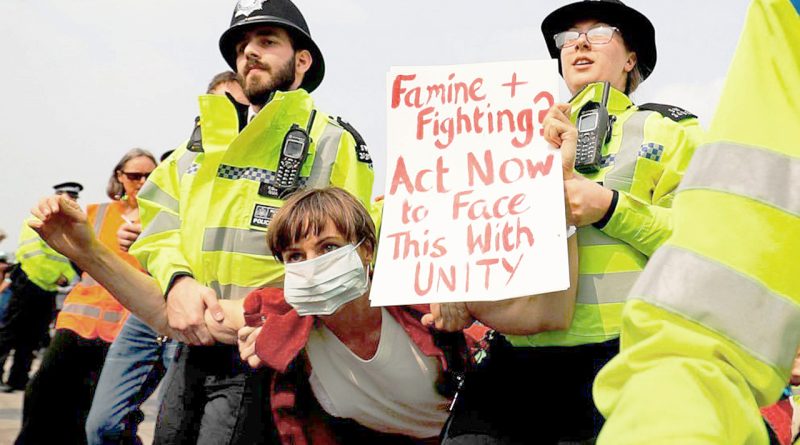 The police, crime, sentencing and courts bill has become law after an extended period of back and forth between the House of Commons and House of Lords. From its conception, the bill has been extremely controversial, particularly because of the increased powers it hands to police to stop protests.

Here are the answers to four key questions you may be asking about your right to protest under the new law in England and Wales.

Can I attend a protest?

Yes. No one in England and Wales needs advance permission to organise or attend an assembly (a static protest) or march (a moving protest). Neither do you need to notify the police if you are holding an assembly, but you will need to give six-days’ notice (unless that’s impossible) of a protest march.

Since the passing of the Public Order Act in 1986, the police have had the power either to impose conditions on marches in advance or on the day. In certain cases, they may ask the home secretary to consent to a ban on all marches in an area for up to three months (and certain assemblies for up to four days).

The police can impose conditions if they reasonably believe the protest may result in serious public disorder, serious damage to property or serious disruption to the life of the community (or if the event aims to intimidate). The Human Rights Act 1998 effectively required the police only to take proportionate decisions, which means they can only impose conditions where the need to prevent those harms would be proportionate to the risk to people not being able to protest.

How does this right change under the new law?

What is now changing is the addition of a fourth reason to limit protests – seriously disruptive noise. The vagueness and arbitrariness of this new rule are concerning. Police are being handed powers in advance to impose quite considerable restrictions on the grounds of predicted noisiness. This amounts to an existential threat to protest, given that making noise is what protesters do.

“Serious disruption to the life of the community” will now include a significant delay to the delivery of time-sensitive products to consumers, or prolonged disruption of access to any essential goods or services. While this brings welcome clarity, its breadth is likely to mean a considerable expansion of discretionary power.

The police will also now be able to regulate single-person protests, while previously two or more were needed to constitute an “assembly”.

There are already a host of offences related to protest that could lead to arrest or prosecution, such as harassing, alarming or distressing someone by using abusive or threatening language – say, on placards or in chants – or to injunctions, such as trespassing. It’s also an offence to breach police conditions on a protest. Under the new law, the Crown Prosecution Service will no longer need to prove that you already knew of the condition – it will be enough to show that you ought to have known about it.

Direct action protesters like Extinction Rebellion and Insulate Britain run the risk of a host of separate crimes. Sit-ins may constitute unlawful obstruction of the highway, as might lock-ons (a technique used by protesters to make it difficult to remove them from their place of protest). These, if on someone else’s property, could also expose you to arrest for aggravated trespass – trespassing with the intention of disrupting, obstructing or intimidating someone else’s lawful activities such as road building or fracking. Specific offences relating to lock-ons were added to the bill during its House of Lords stage but were voted down, and have not been reinstated.

The new law will also give the police power to more easily arrest and charge for public nuisance. This involves either knowingly or recklessly doing something that risks or causes serious harm to the public. Serious harm is defined as death, personal injury or disease; loss of or damage to property; or serious distress, serious annoyance, serious inconvenience or serious loss of amenity –- or obstructs the public (or a section) in the exercise of their rights. Again, many of these provide quite low thresholds for the police to intervene. The penalty is a maximum of ten years.

In many cases, having a lawful or reasonable excuse for the action can be an effective defence. In the case of a group of protesters who formed a blockade outside an arms convention, the supreme court held in early 2021 that their right to protest, under the European convention on human rights, extended to a certain measure of disruption and obstruction. Cases currently making their way through the courts will determine whether that defence can be applied to other protesters for other offences.

What happens if I am prosecuted?

If you are prosecuted and found guilty, then -– for some offences -– you may well face a prison sentence. For others, it is a fine. The maximum for an existing offence such as aggravated trespass is three months or a fine of up to £2,500. There are increases in the new law; obstruction of the strategic road network (motorways and major A roads) now brings with it a maximum penalty of 51 weeks. You might also face prison for contempt of court, if you knowingly breach an anti-harassment or anti-nuisance injunction, even if the injunction wasn’t granted against you but “persons unknown” – not even named or identified protesters.

Of course, you might not be found guilty or you might be given a lesser sentence. Again, there is legal precedent for the courts to take the value of peaceful (even if disruptive) protest into account in sentencing. In the case linked above, the court said it would be rare to be given a custodial sentence even for disruptive protest. This offers a glimmer of hope that prison is not a likely outcome, even for those prosecuted for participating in a noisy protest.