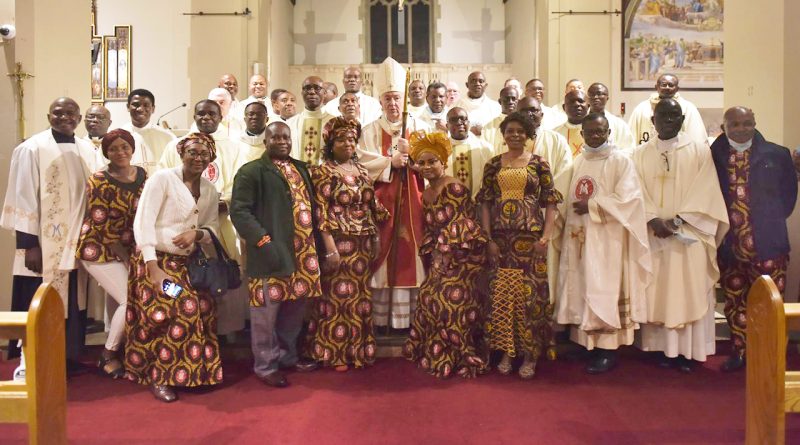 Scripture records the encounter between St Paul and God which transformed him from a persecutor of the followers of Christ into a messenger of the ‘Wondrous Word’ of God per excellence. The Church celebrates the feast of this encounter on 25th January each year. For the Missionary Society of St Paul of Nigeria (MSP), this feast is special and is always celebrated as a reminder of their St Paul, their patron. The MSP UK region celebrates this feast as a body on the Friday nearest to 25th January. This year, the feast was celebrated on 28th January at St Edmund’s Church, Edmonton.

Cardinal Vincent Nichols presided at the Mass that opened the celebrations, with many MSP priests working in the country and friends of the society including some diocesan priests concelebrating. The congregation included parishioners of St Edmund and faithful friends from parishes all over the country where MSP priests serve.

The readings and hymns of the Mass were oriented around the missionary mandate of Christ to the Church to ‘go, therefore, and make disciples of all nations’, which is also the call that St Paul heard in such a dramatic fashion on the road to Damascus.

Preaching about St Paul’s conversion, the Cardinal focused on two phrases from the account in the Acts of the Apostles. The first phrase is: ‘Brother Saul, receive your sight’, spoken by Ananias and followed by an immediate restoration of Paul’s sight. The Cardinal pointed out that, as well as restoring Paul’s physical sight, his vision and mission were also instantly transformed. He received a new way of seeing reality, and he who persecuted the Way became one who would later describe himself as having worked harder than all the other apostles due to grace he had received.

From that moment on, he understood the law differently, because the love of Christ had replaced the blind fidelity to the Law. This was not so much a renunciation of the old law as it was a surrender to a superior law: the divine law of God.

The Cardinal then turned his attention to the second phrase: ‘because you are to be his witness before all mankind’. St Paul continued his travels, the difference being that his mission had changed completely: from the persecutor of the Way to the champion of the gospel message. Paul became a witness for Christ to all mankind in his missionary journeys and in his writings which has come down to us centuries later. He did so with the zeal even greater than that with which he had persecuted the followers of Christ.

St Paul believed ‘we were helpless and hopeless without God, but through the blood of Christ we have been brought near and included in the covenant promise’ (Ephesians 2:12-13). It is in his footsteps that the members of the MSP walk, imitating their patron in ministry here and elsewhere, taking as their motto ‘For Christ we are Ambassadors’.

The Cardinal concluded by enjoining all present to constantly remember that, like St Paul, we have all received a new vision and mission at our Baptism when we were made members of the mystical body of Christ to whom the mandate of mission to the whole world was given. Although not all are called to missionary journeys, every Christian is called to missionary life, a life of obedience to the highest commandments.

At the end of Mass, the Cardinal inducted the Board of Trustees of the MSP UK Region, praying for the spirit of counsel and fortitude upon those who would undertake the responsibilities of the Trustees. He also blessed the Members of the Associate Missionaries of St Paul (AMSP) UK Region. The AMSP are a group of lay faithful who support the ministry of the MSP through their prayers and sponsorship of seminarians training for the priesthood.

The Missionary Society of St Paul, MSP, is a Missionary Institute of Apostolic Life, established by the Catholic Bishops Conference of Nigeria (CBCN) in 1977. It was in response to Pope St Paul VI’s challenge to the Church in Africa during his pastoral visit to Uganda in August 1969, that the Church in the continent be missionary.

The new institute, entrusted to St Patrick Missionary Society to nurture, took as its priority the formation of its missionary priests, with the opening of tge National Missionary Seminary of St Paul in 1977, initially at a temporary site at Iperu-Remo and later moving it to its permanent site at Gwagwalada in Abuja, in 1984. The first MSP priest was ordained in 1985. The Institute currently has about 350 priests.

Missionaries of St Paul first went on foreign mission in 1986, with three groups sent respectively to Liberia, Cameroun, and the USA. The first MSP priest arrived in Clifton Diocese in the UK in 2000. The mission of the Institute in the UK continued to grow, with MSP priests now ministering in 11 dioceses in England and Wales, and two dioceses in Scotland.

The first MSP to minister in Westminster, Fr Emmanuel Ogunnaike, arrived in the diocese in 2006 and was assigned to St Lawrence Catholic Church, Feltham as Assistant Priest. He was later appointed in 2009 as Parish Priest of the Most Precious Blood and St Edmund Catholic Church, Edmonton. In 2015, the second MSP team of Fr John Eze and Fr Livinus Onyebuchi were entrusted with the care of the two Hatfield parishes of Marychurch and St Peter Catholic Church, as well as the Catholic chaplaincy of the University of Hertfordshire.