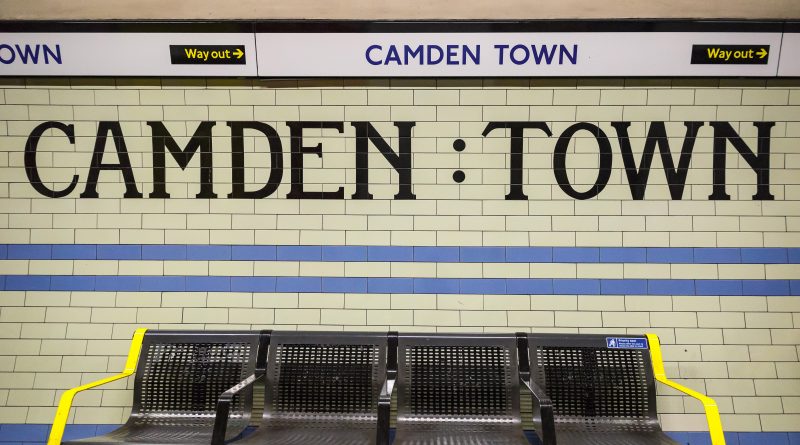 It’s odd how sometimes the deepest conversations about architecture can pop up in the most unlikely of places. Take Camden Town underground station for instance. It had been a busy day dashing around London, and the trains were already becoming infrequent. At this time of night there a few places to sit and, as any traveller will tell you, those dull, poorly designed steel benches that seem to be popping up everywhere these days are cold, and uncompromising.

You wouldn’t think it would lay beyond the imagination to design a railway station seat that worked, that provided comfort, function and complimented its surroundings. But this was Camden and, as I was about to discover, Camden has an ignominious place in a revolution that’s creeping its dark way through architectural ideologies.

Far from being thoughtless creations, these steel structures have been designed with great care and planning given to their function. The placing of armrests, for instance is to deter ‘misuse’ – from passing skateboarders to homeless sleepers. Or so I was told by the commuter sitting next to me, who also winced as he sat down cautiously on the cold, steel seat. (Apparently the thick black stove enamelling on our seat is supposed to offset the coldness of the steel, but it doesn’t work!)

I’m about to be given a five minute lecture on why Camden is at the heart of this unfriendly seating problem, and much worse. I’m also about to discover that those strange coffin-like concrete benches you can see popping up around London these days are not just random objects, but part of a growing and dubious trend known as ‘hostile architecture’. 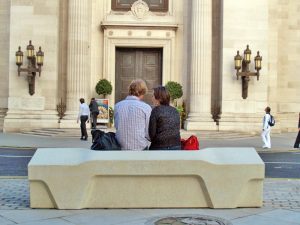 London Firm Factory Furniture in 2012, the Camden Bench is an object straight out of the Brutalist tradition – resilient, obstinate, threatening, and utterly functional. Constructed from dense, honed concrete, it was crafted to cope with the punishment of an urban environment, and the challenges of modern-day usage – and abusage. It’s cleverly sloped and contradictory edges make it impossible to sleep on, and deter ‘grinding’ (apparently, skateboarders love angled edges!).

Being a solid object, there is nowhere that rubbish can accumulate, or objects such as knives or drugs can be hidden, and the bench also makes a very useful barrier to traffic. When first introduced, Camden Council and the manufacturers were unapologetic about the discriminatory functions of the bench, and an outcry erupted.

For many, these objects were an endictment of the council’s (and government’s) inability to deal with our growing urban social problems; for others they were a totemic statement of exactly the same argument, the area’s inability to provide adequate welfare and civic responsibility. There was also understandable concern that this represented a worrying new trend in civic attitudes to public spaces.

On my regular travels on the UK rail network, I’ve noticed a growing trend in public spaces to replace seating altogether, and I often have to make do with the dreaded ‘leaning bench’, which is usually little more than an angled, polished plank onlegs, or attached to a wall. Designed cleverly to convey a message of modernity and novelty, these unremarkable structures are increasingly becoming an intrinsic component of public architecture, which is helping to shape a worrying acceptance in the public subconscious that exclusion and discrimination are not only acceptable, or even essential, but a virtue.

Of course this is nothing new – many of the wealthy areas of London in the 18th century were designed around enclosed garden squares with railings to separate the wealthy from the poor, and in 19th century Paris Georges-Eugène Haussmann redesigned large areas of the city with wide, open avenue intersections designed to give the civic authorities a clear view of any public trouble or looming protest.

In more recent times we’ve seen the spread of windowsill spikes, random sprinklers, hostile lighting and other disruptive measures that are threatening to turn our cities into bleak and divisive places to live and work, where you wouldn’t want to hang around or socialise.

Despite a growing protest movement against hostile architecture, urban architects are increasingly integrating these features into building and design plans, under obvious pressure from ‘civic’ entities who argue that it’s a necessary fact of modern life if we are to ‘protect’ citizens, and safeguard our cities’ residents from fellow human beings who are perceived as being a threat.

It’s ironic that we are entering a 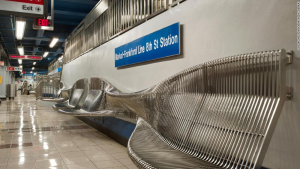 period of seismic change in the way we plan and build our urban centres – environmental challenges, greater awareness of the human space and global economics are pushing us towards more sustainable and equitable spaces that are at last beginning to recognise the importance of the human Soul.

Yet, in parallel with this, existing urban environments are rapidly ceasing to be ‘public’ spaces at all, but are being reduced to divisive combat zones, where the traveller has to be protected from the realities of post-industrial urban decay and the social problems that free-market capitalism has created. (It’s surely no coincidence that most ‘hostile design’ sits on private property).

When planning public spaces, civic authorities invariably brief architects on the types of social behaviour they want to encourage and discourage. This preconditions design, not only shaping physical spaces, but also how citizens will interact with them, and this in turn influences a whole range of social and aesthetic attitudes. For instance, across our cities there is already an unchallenged assumption that lounging around drinking coffee is good, whilst busking or skateboarding is bad.

Whilst some degree of utilitarianism is going to be inevitable in modern urban planning, there’s also an urgent need to resist the temptation to let governing bodies and legislators decide what makes for acceptable human behaviour, and a safe environment.

Hostile architecture does far more than design cities, it seeks to design people, and that cannot be tolerated in any civilised society.

Joseph Kelly is the Editor of Agora Journal, the magazine of Cherished Spaces: