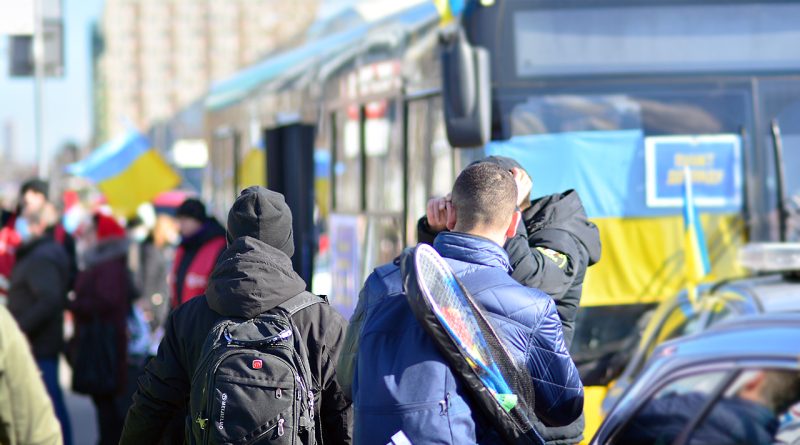 In response to the government’s announcement of a £350 monthly payment in exchange for hosting Ukrainian refugees, more than 122,000 individuals and organisations have so far registered their interest on the official website and the flood of application caused the website to crash just hours after it was launched.

The move came after a barrage of criticism that the UK was responding painfully slowly to the refugee crisis, as the numbers revealed that we had approved only a handful of applications, whereas our European neighbours had opened their borders to desperate people fleeing the conflict.

Speaking at the BAFTA film awards at London’s Albert Hall last week, film star Benedict Cumberbatch, who owns a £4m London townhouse and two flats in the capital, pledged to host a Ukrainian family, as did football pundit Gary Lineker, who has a personal wealth in excess of £30 million. Disgraced MP Matt Hancock also waded in to offer a family space in his luxurious Suffolk home, though other legislators were somewhat less forthcoming when questioned.

Offering shelter in your house for a stranger in need is rooted deeply in biblical teaching and it is certainly something that Jesus himself would have encouraged, but in the complex world in which we live today it’s not a simple matter of providing the means for a bed and a meal (plus a bung to the local council) that the government scheme implies. Indeed the particular problem with this proposal is that goodwill, Christian charity and an understanding of the fragility of your neighbour is in many cases rooted most heavily in the communities and families that can least afford to engage with this scheme.

Providing a home for a desperate family is little more than a matter of logistics when you have ample spare space in your property, a decent amount of disposable income, and a ready support network so others can sort the mechanics and problems of the process for you. If your circumstances are anything less than this it’s still important to help if you can, but you’ll need to think very carefully about the realities of what the government has put on offer, and more importantly what it hasn’t.

Having largely spent its way through Brexit and the pandemic, the UK has already run up an eye-watering national debt that is set to heap a dreadful burden on our next generations. Behind the scenes the long-anticipated invasion of Ukraine has already been creating ‘opportunities’ for ruthless commercial entities to redress some of that debt – British entrepreneurs are already busy in Ukraine now talking about rebuilding projects and new initiatives once the conflict is resolved; general commerce with both Ukraine and Russia will undoubtedly resume at a pace as soon as its discrete to do so, and of course our arms industry will get a massive longterm boost from all the bloodshed and mayhem that the war has caused.

Whilst the £350 sponsor-a-family project has the most noble intentions on the surface, you can be sure there are hard economic considerations to the government’s apparent beneficence. Way back when life was something resembling normality, the UK was more than willing to welcome in large numbers of Eastern European workers, especially for low paid seasonal work in tourism and agriculture – in fact it was an absolutely essential component of the British economy.

Under the £350 scheme there are different considerations at work. The very concept of desperate (but carefully vetted) families and individuals putting their details on a website, to be offered for sponsorship at £350 a month to equally carefully vetted UK families and organisations bears all the characteristics of a perverse game show, and actually passes the moral responsibility for refugee welfare squarely from the government onto the public.

What’s at work here in the first instance is a fairly cynical screening of Ukrainians to cherry pick those most likely to contribute tax income to the British economy. Clearing immigrants on the basis of their academic qualifications and job skills is nothing new, it’s the kind of dubious meritocracy championed by Theresa May when she was Prime Minister. But the fundamental problem with a meritocracy is that it presumes those who get in (or float to the top) are worthy of getting in (or being successful), and thus those who don’t are rightly failures and therefore by definition deserve to be excluded (or sink to the bottom).

The £350 scheme also requires that the sponsoring families and individuals are screened for suitability. This is far more difficult to quantify and is wide open to abuse and exploitation. It’s the kind of ill thought out idea that can lead to vulnerable and isolated individuals being locked up as slaves in a garden shed for 40 years, or packed 15 to the dozen in some bedsit being bussed out daily to hard labour. Of course it is intended to flush out reasonably wealthy and stable families who will likely offer the greatest chance of helping to build meaningful new lives for Ukrainian refugees to become net contributors to the UK economy, and in this respect the scheme should work reasonably effectively.

Far less certain is how more vulnerable but equally well-meaning families will cope with the many complex issues that will inevitably arise over the coming months of their sponsorship, especially when it seems that the government has by and large absolved itself of its welfare responsibilities by offering the £350 ‘thank you’ payment – an warped assumption in itself that money talks first, compassion second.

Those Catholic charities and support organisations who have long been working the area of refugees into the UK will tell you that it’s a challenging pledge to take in a desperate, displaced individual or family who have fled warfare and find themselves in a strange country and culture where language is often a barrier, needs are complex and the welfare and future of their displaced children is also paramount.

Supporting refugees is unquestionably the right thing to do if you are able, but it requires a skilled and very pro-active support network to work through what both parties need if things are to work out. Most importantly it demands that the incoming person or family is supported long after they have left their sponsor. The dark and desperate corners of too many of our towns and cities are populated by incomers who have been abandoned by our supposedly world-beating social care and support systems.

And we should also refrain from assumptions that people will have a wish to return home once the conflict has been resolved. As anyone from the many previous diasporas to the UK will tell you, once family, children and employment are embedded, the idea of returning to your old homeland gets reduced to nostalgic ballads and occasional holidays. Those who land here will be here for good.

Offering long term and skilled support can be something beyond the goodwill and best intentions of even the most charitable family. It’s not sufficient to assume – as the government seems to be doing – that everyone will get on and all will be well. Again this is the UK government passing on its social responsibilities. Just look to Ireland where refuges have been welcomed without visa checks and the government has pledged full support and access to all benefits and services without question – a far more fiscally astute strategy if you want people to settle quickly, bed in well and contribute usefully to your economy in the future.

Caritas Social Action Network (CSAN) the official Catholic agency tackling poverty and injustice in England and Wales, which includes 54 grassroots charities, has already stepped in to express its views about the scheme, especially in the light of a looming crisis in the cost of living in the UK. CSAN has rightly pointed out that ‘Many of the potential local responses to refugees should be considered for existing households falling into deep poverty too.’ It has broadly welcomed the scheme, but has also pledged to ensure that there is a co-ordinated response to providing accommodation, support services, safeguarding, counselling and practical help to refugees, and that Catholic concerns will be made clear to the government.

Providing support and services to vulnerable people is one of the things that our Catholic Church does best, and it has always been the very essence of the Christian message. Traditionally we’ve steered clear of politics and over the years many of our justice and peace activities, workers and departments have even been dissolved or marginalised. But as the Ukraine conflict, and the behaviour of governments has demonstrated repeatedly, faith morals, and politics are intertwined inextricably and the J&P narrative is now needed urgently.

Over the coming months we must spare no efforts in ensuring that the government does not pass on its moral and social responsibilities to both our new neighbours, and our own most vulnerable citizens.

Joseph Kelly is a Catholic writer and publisher, and is founder of www.thecatholicnetwork.com