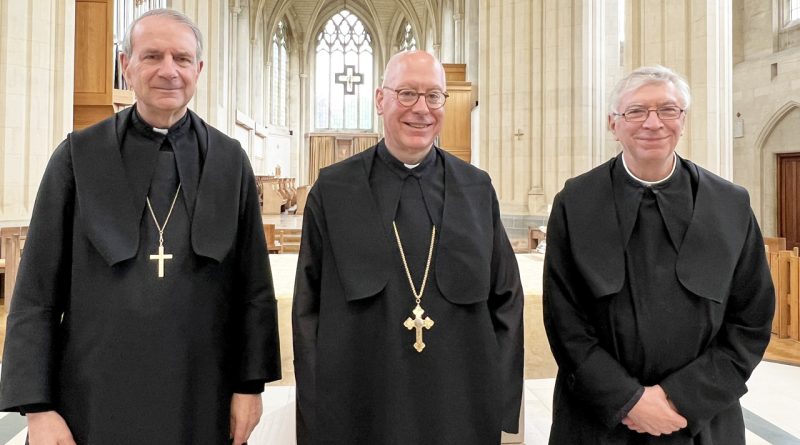 The community at Douai Abbey in Berkshire assembled this morning to elect a new abbot for their community.

Douai Abbey is a Benedictine Abbey at Upper Woolhampton, near Thatcham, Berkshire, situated within the Roman Catholic Diocese of Portsmouth. Monks from the monastery of St. Edmund’s, in Douai, France, came to Woolhampton in 1903 when the community left France as a result of anti-clerical legislation.

Fr Paul Gunter OSB was born in Wolverhampton in 1966 and grew up in Stratford-upon-Avon. He has been a monk of Douai Abbey since 1985 and was ordained priest in 1991 after graduating in theology from Heythrop College, University of London. Over ten years of parish ministry followed, first at Cheltenham in the Diocese of Clifton, then as parish priest of Studley in the Archdiocese of Birmingham.

In 2002, he was sent to Rome to pursue further studies in Liturgy, gaining a Licence in 2004 and a Doctorate in 2006 from the Pontifical Institute of Liturgy attached to Sant’Anselmo, where he has also been organist since 2005. After defending his doctoral thesis, “Edmund Bishop and the Genius of the Roman Rite”, in June 2006, he joined the faculty of the Pontifical Institute of Liturgy and teaches courses and seminars on liturgical history, liturgical theology, and liturgical catechesis.

In 2008, he was named a consulter to the Office of the Liturgical Celebrations of the Supreme Pontiff and in 2010 to the Commission entrusted with the aggiornamento of the 1962 Missal as requested by Summorum Pontificumand under the jurisdiction of the Congregation of the Doctrine of the Faith.

In February 2012 he was appointed appointed as Secretary to the Department for Christian Life and Worship of the Catholic Bishops’ Conference of England and Wales.