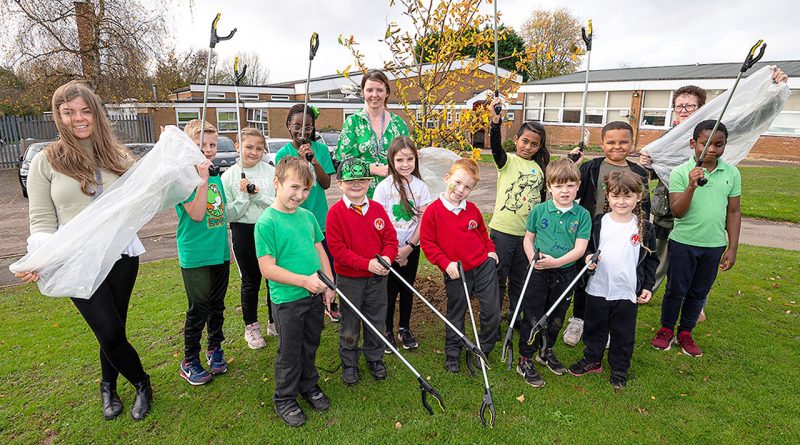 Children at a school in Coventry have been going green in recognition of a major environmental conference.

Ss Peter and Paul Catholic Primary School, part of the Romero Catholic Academy, has held a ‘green day’ to mark the end of the COP26 conference.

Children learnt more about the environment and climate change throughout the two-week event, finishing with a special day dedicated to the topic.

They dressed in green to mark the occasion and planted trees in the school grounds which were donated to the school by Coventry’s Assembly Festival Gardens, launched a new ‘bug hotel’ and held a morning of rolling prayer during which each year group learnt more about COP26 and prayed for change.

Finally, a group of children and staff were joined by parents and younger siblings for a community litter pick to help clean up the area around the school.

The event was driven by the school’s Eco Team, which was launched last year after the children learnt more about deforestation and wanted to do more to help the environment.

Lorraine Stanton, Principal at Ss Peter and Paul Catholic Primary School, said: “The children had a fantastic time on our green day.
“Our Eco Team are very environmentally-focused, doing work across the school such as recycling, turning off lights and taps and encouraging people to use our on-site clothes bank, but they wanted to do something to mark COP26.

“It was an excellent way for children right across the school to learn more about the environment and the small changes that they can make to help make a difference in combatting climate change.

“The group of children who took part in our litter pick ranged from Year 1 to Year 5 and they found a lot of litter – which was a real eye opener for them.

“We were able to talk about what dropping litter does to the environment and the wildlife, and at the end of it they felt like they had made a real difference. It was also fantastic to get some of our parents and younger siblings involved.

“We really hope that the children will take something away from the event and continue to spread the message about climate change and encourage others to change their habits.”