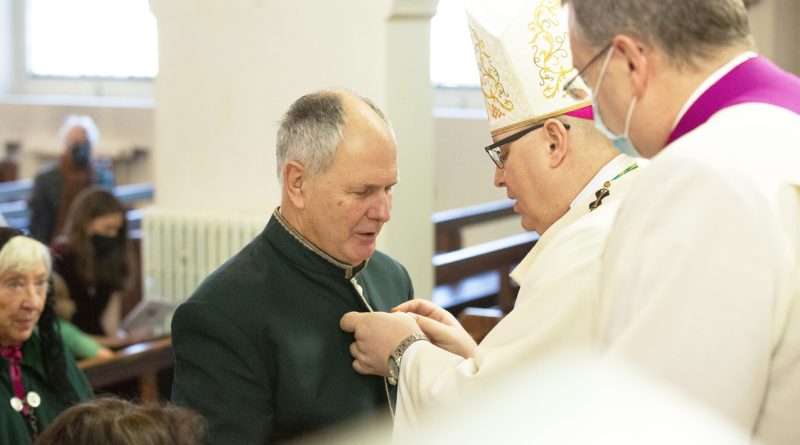 THE UK head of a leading Catholic charity has been given a papal knighthood in recognition of his leadership over three decades.

Neville Kyrke-Smith, national director of Aid to the Church in Need (UK), was made a knight of the Equestrian Order of Saint Gregory the Great during a Mass on 2nd December at Sutton’s Our Lady of the Rosary Church, presided over by Archbishop John Wilson of Southwark.

Archbishop Wilson said: “The papal knighthood requires proven loyalty to the Holy See… this reward recognises your personal contribution in the most personal and missionary way to our brothers and sisters in the suffering Church – something so close to your heart”.

He continued: “This mission and your commitment to it are echoed by Saint Paul’s words to the Christians in early Thessalonica, ‘We loved you so much, that we were eager to hand over to you not only the Good News but our own lives’.”

More than 100 attended the Mass and investiture ceremony, the music for which included Mozart’s Coronation Mass and Bruckner’s motet Ecce Sarcerdos Magnus.

Neville Kyrke-Smith became national director of the UK office of ACN in 1991, after his conversion to Catholicism.

He had been a Church of England curate at Littlemore, the church built by St John Henry Newman, and was later vicar at the Anglican shrine of Our Lady of Willesden, north London.

Before joining ACN he was involved with projects supporting churches in eastern Europe oppressed by Communism.

Mr Kyrke-Smith visited more than 30 countries, not only former Soviet countries like Ukraine and Russia, but also places where the charity’s work was growing like Lebanon and China.

During his time as national director, the charity’s focus moved to Africa and the Middle East, and saw the UK office supporting major aid projects helping Christian IDPs forced out of their homes by Islamist extremists in northern Iraq.

Under his leadership, ACN (UK) also established the annual #RedWednesday campaign and introduced the Persecuted and Forgotten? report looking at the global oppression of Christians – both of which have been taken up by the charity’s other national offices.

In a message to the charity’s staff, Mr Kyrke-Smith said: “I see this recognition as not only for me, but also as a thank you to all at ACN and our wonderful benefactors.”

In a letter of congratulation to Mr Kyrke-Smith, Thomas Heine-Geldern, ACN (International) Executive President, and Philipp Ozores, Secretary General, wrote: “We are so grateful and happy that the Holy See has taken notice of your lifelong, successful, and fearless commitment to our Church by conferring to you such an exceptional distinction.

“Not only are you distinguished and honoured by this knighthood but also ACN as an entire organisation and especially ACN (UK).”

The Equestrian Order of Saint Gregory the Great was instituted by Pope Gregory XVI in 1831 to be bestowed on “gentlemen of proven loyalty to the Holy See who, by reason of their nobility of birth and the renown of their deeds or the degree of their munificence, are deemed worthy to be honoured by a public expression of esteem on the part of the Holy See”.

The earliest recipients were Italian and Austrian aristocrats who had helped restore the pope’s political authority following an attempted revolution in the Papal States in 1830.