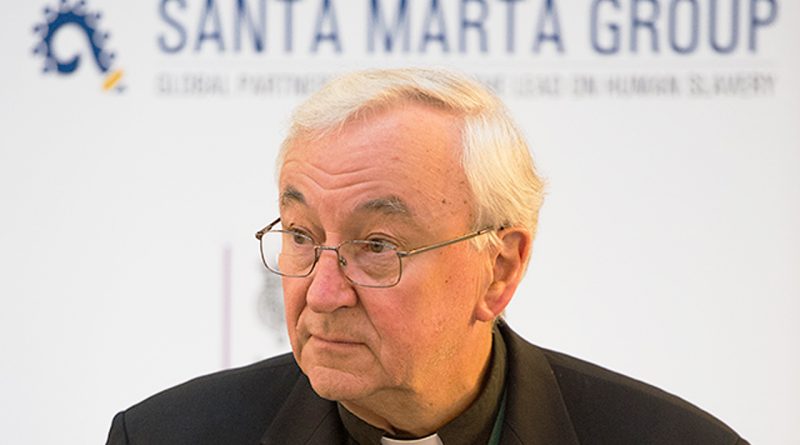 The Archbishop of Westminster has spoken movingly of how a group of 30 mothers and children were rescued after a bus intending to traffic them was stopped when a mother called a number she received from an anti-trafficking leaflet.

Led by Cardinal Nichols, the Santa Marta Group is an alliance of international police chiefs and bishops from around the world working together with civil society in a process endorsed by Pope Francis, to eradicate human trafficking and modern day slavery.

The Cardinal shared the story as an example of a best practice implemented to combat the scourge of anti-trafficking as part of the efforts of the Santa Marta Group.

Responding to questions on how the war in Ukraine has impacted human trafficking and their best practices, Cardinal Nichols recalled very informative and inspiring reports from the police forces of Poland and Lithuania.

“It is just an enormous challenge,” he noted, stressing the war in Ukraine has caused the largest movement of people in a short time across borders in Europe for 60 or 70 years.

“A positive” aspect which the Cardinal shared was “that because of some of the partnerships that have already been established, within a matter of hours, leaflets had been prepared warning those who were crossing the border against the dangers of being trafficked.”

Those leaflets, he noted, had a contact number, and one of them was passed out to a Ukrainian woman who then narrowly avoided falling into the hands of human traffickers.

“She was encouraged onto a bus and there was a busload of women with some children, and she realised they were not going in the direction that she expected. So, she had a mobile phone. She rang the number, the police came and stopped the bus, and I believe some 27 women and children were rescued from potential forced labour or slavery.”

This, he said, is a specific example of the many “stories of speedy action attributed to existing patterns of cooperation.”

The Cardinal warned that authorities are fighting an uphill battle.

“It was pointed out to us that, to begin with, the better-educated, probably better-off people, were those able to get to the border,” he noted, explaining that “those coming now are the poorer people who have less resilience and fewer resources.” He acknowledged that “the strain is being felt everywhere.”

During his remarks, Cardinal Nichols discussed commitments needed to combat the scourge: educating communities and raising awareness; supporting human trafficking victims; breaking the financial model of human trafficking; challenging the world of business; and, drawing attention to many forms of modern slavery, including those “hidden in supply chains” and “the wicked trade of human organs and body parts.”

The Archbishop of Westminster deplored the enormous profitability of trafficking, as the UN’s International Labour Organisation estimates that human trafficking generates US$150.2 billion in illegal profits each year.

“We want to fashion points of cooperation and bringing about the confiscation of profit which the Holy Father always refers to as ‘blood money’. We want to work to effect the seizure of assets and the experience of governments over the last few months in seizing the assets of Russian leaders proves that this can be done too. It can bring some of those assets as compensation for the victims of human trafficking.”

“It’s the local action as well as leadership,” he said, “that can help establish a new moral compass, which is geared directly to the healing of the wound of human trafficking and the defence of human dignity.”

With thanks to Deborah Castellano Lubov of Vatican News