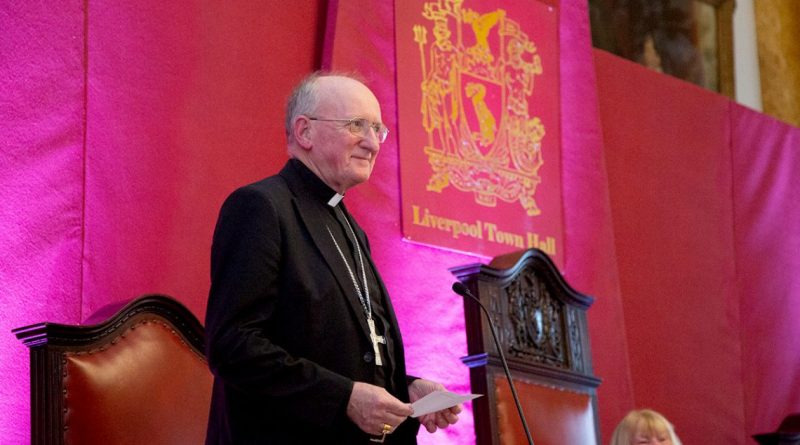 Bishop Tom Williams, Liverpool’s long-serving Auxiliary Bishop, has received the city’s highest civic honour – the Freedom of the City of Liverpool. The honour was bestowed during a special ceremony at Liverpool’s Town Hall, which began with a rendition of the ‘Theme from Z Cars’ – a nod to Bishop Tom’s life-long support of Everton FC – and featured contributions from not only the Lord Mayor of Liverpool, Mary Rasmussen, but also Deputy Mayor Jane Corbett and BBC Radio Merseyside broadcaster Roger Phillips.

Mark Bolesfield, Director of Regeneration and Economy from Liverpool City Council, read the resolution conferring the honorary freedom of the city on Bishop Tom. This was granted him in January 2020 but the pandemic meant the ceremony had been put on hold until 30th September.

Half a century of service

Bishop Tom, who has served in the city for almost half a century, was born off Scotland Road and was ordained priest in the city’s Metropolitan Cathedral in 1972. He has served at St Francis of Assisi in Garston, Sacred Heart on Hall Lane, Our Lady of Walsingham parish in Netherton, Our Lady Immaculate Parish in St Domingo Road and St Anthony’s on Scotland Road.

His roles across the years range from early chaplaincy of Bellerive Grammar School through to governor and chair of governors in various archdiocesan primary and secondary schools.

During nine years bridging the late 70s and early 80s, meanwhile, he was chaplain at both the ‘old’ Liverpool Royal Infirmary and the ‘new’ Royal Liverpool Hospital.

In 1997 he became chair of Project Jennifer, the scheme set up by parishioners and others in the Scotland Road area to work with the city council and businesses to regenerate the city’s north end by delivering a new district centre.

He also worked with Matalan founder John Hargreaves to establish the NSPCC Liverpool Service Centre on the site of the former Great Homer Street market.

Man of the people

“You truly are a man of the people. Bishop Tom, you deserve to be an honorary freeman of the city of Liverpool. You’re an inspiration, a guiding light, a listening ear and a community leader, speaking up for the area and actively helping make a difference to the lives of local people, and I’m so pleased this has been recognised. Bishop Tom Williams has dedicated his life to serving his parishioners and the wider community in and around Scotland Road and the Freedom honour is truly deserved.”

Priest of the people

“I am very surprised and humbled at this great honour. Five generations of my family have been part of this city and it has been a privilege to serve here for 49 years.

“This is truly home to me, and I will always be grateful for the support which I have received.”