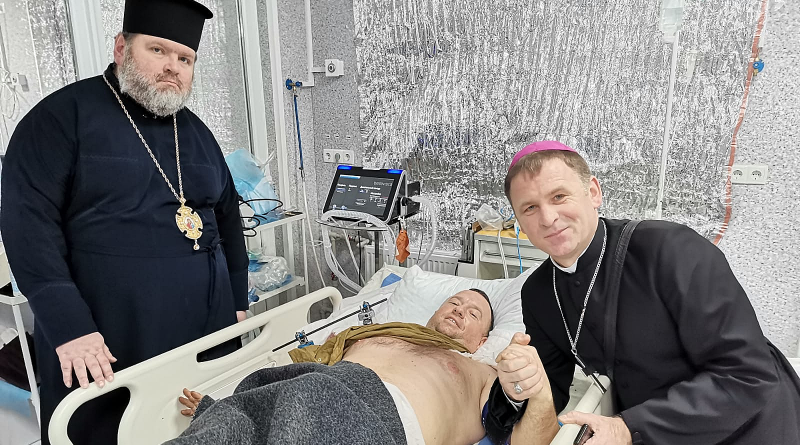 Senior clergy in Ukraine – including a bishop sheltering in a bunker – have given a leading Catholic charity first-hand accounts of the violent effects of Russia’s invasion.

Bishop Pavlo Honcharuk, the Latin-rite Bishop of Kharkiv-Zaporiyia, has for several days been in a bunker alongside several families and his Orthodox counterpart.

Highlighting the severity of the situation to Aid to the Church in Need (ACN), he said: “I wish for this war to end as quickly as possible. But, while evil has shown itself to be so strong, this has also exposed a lot of good.

“In a way, the evil we are experiencing also squeezes the good juice from the grape, and that good juice is our compassion, mutual support, and love. It shows our true faces.”

He added: “My message is short because we are under constant bombardment, and I am a little nervous, but we try to act normally.”

Bishop Stanislav Shyrokoradiuk, the Latin-rite Bishop of Odessa, a port city that has been under Russian bombardments from the air and sea, reiterated Bishop Honcharuk’s assessment of the conflict.

“[W]e are living in the here and now, and the situation is critical. We will remain here, and we ask for your prayers.”

In Lviv, near the border of Poland, so far free from fighting, the Church is focusing its efforts on supporting the thousands of refugees who are passing through.

Sister Natalia, a nun with the Greek-Catholic order of the Sacred Family, in Lviv, told ACN: “Thanks to the help of the world, Ukraine resists, and we believe it will survive.

“Here, we have been helping the displaced, supplying air-raid bunkers, and welcoming people, especially women and children. Most then head abroad, but here they have the opportunity to rest with us. And we pray together.”

Father Justyn, a Pauline Priest, had to escape to the city of Kamianets-Podilskyi, in western Ukraine, and described to ACN the chaos on the roads.

Father Justyn said: “It took me eight hours to travel 150 kilometres. The roads were full of people fleeing west…Traffic jams, queues in shops, chemists and petrol stations along the way. People are scared because they do not know what is going to happen.

“Many friends have called me and ask why Ukraine has to put up with such evil. Some want to make their confessions, but I can’t confess them over the phone. All I can say is ‘reconcile with God, repent, sincerely ask for forgiveness and He will hear you’.”

Bishop Honcharuk praised the benefactors of ACN after the charity announced it would send €1 million (more than £830,000) in immediate emergency aid to Ukraine.

He said: “I would especially thank the benefactors who, through ACN, fulfil their calling to show mercy and love. I sincerely thank you all, the whole of the ACN team, all employees, volunteers and benefactors.”

AID TO THE CHURCH IN NEED