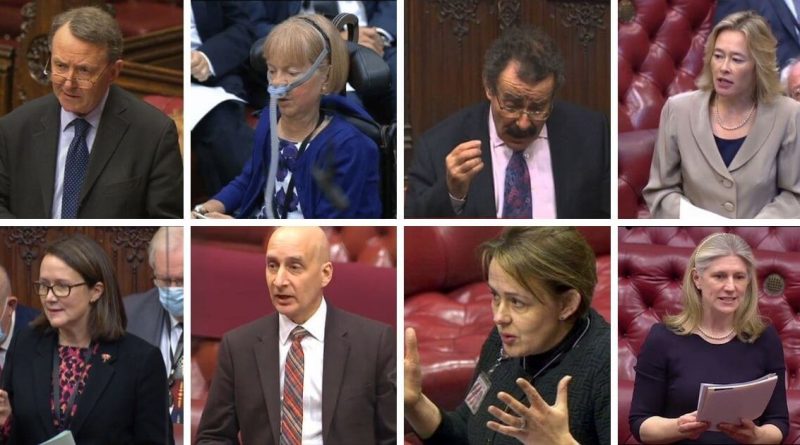 Baroness Meacher has not taken her assisted suicide Bill to a vote, following mass opposition from Peers with over 60 peers speaking against the Assisted Dying Bill during its Second Reading today in the House of Lords.

The assisted suicide lobby would likely have pushed for a vote at Second Reading if they felt they had the numbers to win a division. However, it looks like they realised that they would be unlikely to have sufficient support to win a vote today.

The Bill will now to proceed to Committee Stage, but is unlikely to be given time in Parliament to be debated in the House of Commons and become law, given that it is not supported by the Government.

The debate, which went for over seven hours, followed a very large amount of media coverage and opinion pieces from MPs, Peers, doctors, and other experts that have appeared over the last two weeks highlighting major issues with introducing assisted suicide. This has included nearly 1,700 medical professionals coming out in opposition to the Bill and an investigation by the Mail into the assisted suicide process overseas, revealing that the use of fatal drugs to end life can be a harrowing experience over hours or days for the person involved.

Lord Winston made the opening case for the opposition to the Bill and focused on the misleading title of the Bill, having laid an amendment to change references in the Bill from ‘assisted dying’ to ‘euthanasia’ instead:

“It [this Bill] raises the most important moral question and needs clarity without euphemism.

“Assisted dying could equally be used to apply to palliative care. It seems to me that this title does not really represent what is intended… euthanasia… is what we are actually talking about”.

Speaking against the Bill alongside a number of other Anglican bishops, the Archbishop of Canterbury, Justin Welby, declared the bill to be “unsafe”:

“No amount of regulation can make a relative kinder or a doctor infallible; No amount of reassurance can make a vulnerable or disabled person feel equally safe, equally valued if the law is changed in this way”.

Former Health Minister and chief executive of the NHS Confederation, Lord Hunt of Kings Heath expressed serious concern at the prospect of pressure on vulnerable people to end their own lives through assisted suicide:

“I remain concerned about the unintended consequences of people feeling pressurised into ending their own lives, either because of fear that they might be a burden or because relatives might seek to gain through the accelerated death of a relative”.

Baroness Smith of Newnham spoke of her concerns about how the Bill is framed, saying that Peers must “legislate for the most vulnerable”, and that concerns about legalisation in Canada and the Netherlands shouldn’t be ignored by supporters of the Bill.

Lord Curry of Kirkharle echoed these fears and the dangerous impact of such a Bill on wider society:

“I fear that this country will become a society that terminates the lives of its old people, its sick and disabled people, because they fear they are being a burden to their loved ones and because of the time and the cost of their care.”

In a scathing criticism of the legal demands of the Bill on the High Court’s Family Division to approve requests for assisted suicide, Lord Carlile of Berriew QC CBE said:

“The Bill therefore asks a Family Division judge to approve something no judge has ever been asked to do since the abolition of the death penalty.”

One of the standout speakers of the debate who lives with a progressive disability, Baroness Campbell of Surbiton, the founder of Not Dead Yet UK and a long time campaigner for disability equality and human rights, spoke powerfully on the damaging effects such legislation would have on the lives and treatment of those with disabilities:

“It would alter society’s view of those in vulnerable circumstances by signalling that assisted suicide is something that they might or ought to consider”.

“Disabled people with terminal conditions or progressive conditions like mine are alarmed by the misleading narrative of autonomy and choice”.

“We must not abandon those who can benefit from high-quality health and social care to the desperate temptation of assisted suicide in the guise of a compassionate choice.”

Similarly speaking as a Peer living with a disability, Baroness Masham of Ilton highlighted the disturbing proposal to introduce prescriptions of lethal drugs into our health system: “Lifting the lid off evil, poisonous drugs which kill is frightening and dangerous… Vulnerable people will be pressurised into thinking they are a burden.”

Lord Alton (see video, right hand panel) emphasised that the proposed assisted suicide legislation was unsafe and could not be supported by Peers:

“Notwithstanding the good intentions of those who produce these recurring bills, the same unanswered questions about the risks to vulnerable people… and the lack of safeguards remain and they remain unanswered”.

“In truth, what are described as safeguards are simply a wish list for what its sponsors hope would happen in an ideal world”.

It would be profoundly irresponsible to enact legislation without knowing how many putative safeguards might work. Asking us to do otherwise is like asking Parliament to sign a blank cheque.
Lord Alton

“It would be profoundly irresponsible to enact legislation without knowing how many putative safeguards might work. Asking us to do otherwise is like asking Parliament to sign a blank cheque.”

“It is a great outcome that this Bill was not taken to a vote today. The Bill is unlikely to be given time in Parliament to be debated in the House of Commons and become law, given that it is not supported by the Government”.

“It is wonderful to see that so many Peers came out today to oppose introducing a dangerous assisted suicide law”.

“We have increasing evidence that people’s wishes to die are transient. The Irish Longitudinal Study on Ageing, for example, surveyed 8,174 people over the age of 50 and found that 3.5% expressed a wish to die at Wave 1 of the study. However, 72% of these participants no longer reported a wish to die when reassessed two years later. We should seek to care for those experiencing suicidal thoughts, rather than state-sanction their deaths”.

“It is no coincidence that many prominent people with disabilities, plenty of disability rights groups, and many respected healthcare professionals continue to rally against introducing assisted suicide, for it strikes against the very heart of the dignity and care we ought to afford to each human being”.