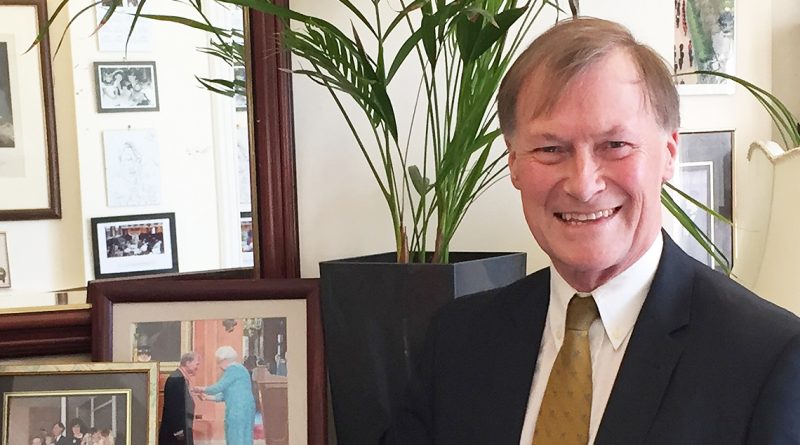 The parish priest of Sir David Amess, who was tragically stabbed to death this afternoon, has spoken movingly of the MP and his Catholic faith.

In an online interview with the BBC, Fr Kevin Hale of Our Lady of Lourdes & St Joseph church in Leigh-on-Sea, Essex, said he is “utterly shocked and appalled” by the stabbing.

“He was a great supporter of the parish and of everything in the locality. He was to be seen at Mass – [he was] a great Catholic, and a great constituency man.

“If I can speak on behalf of the Catholic community in the area, our hearts and our prayers go out profoundly to his wife and to his children.”

“I was shocked and saddened to learn of the killing of Sir David Amess MP, while serving his constituents and country,” said His Eminence.

“I pray for the repose of his soul, and for his family and constituents who grieve for him. May he rest in peace.”

Whitehouse Communications Chair, Chris Whitehouse, who runs the Catholic Legislators’ Network of which Sir David was an active member, said: “I’m in a state of profound shock. David and I have worked together on campaigns since we both started in Westminster in 1983. He was always such a gentle and genteel man, exuding charm and genuine compassion in equal measure. Parliament, his party, and his family are all poorer for his passing. May he rest in peace, may perpetual light shine upon him, and may his family be consoled.

“One of the most hilarious evenings of my life was when Sir David joined Lord Alton, Ann Widdecombe and me for a Bangladeshi supper after we had all endured Ann’s performance in the pantomime, Cinderella, in High Wycombe. He was a truly good friend to all three of us,” said Chris.

Mike Kane, MP for Wythenshawe & Sale East, and Convenor of the Catholic Legislator’s Network, said: “David was such a lovely presence around the house. I was honoured to spend time with him in Rome for the beatification of Henry Newman. May he rest in peace.”

“He was a tremendous colleague in the House of Commons. He was full of enthusiasm for parliament, he was full of life. It’s a horrible shock.”

As well as his political colleagues people have been paying tribute to Sir David Amess from his local community, including those at the nearby St Peter’s Catholic Church.

Sir David was a Catholic and Father Jeff Woolnough, the parish priest at St Peter’s, praised him as a “friend to all”.

He led a Mass on Friday evening in memory of Sir David, describing him as “Mr Southend”.

Sir David was raised as a Catholic and had a strong pro-life stance on abortion issues in the Commons. He opposed abortion under most circumstances. In June 2005, he supported the Prohibition of Abortion (England and Wales) Bill introduced by Laurence Robertson that sought to almost entirely ban abortion.

He was a constant campaigner for improvements in animal welfare and husbandry. He consistently voted to ban foxhunting and hare coursing, and was a patron of the Conservative Animal Welfare Foundation.

He supported many campaigns, including banning cages for game birds, puppy farming and smuggling and ending the transport of live animals for export.

Former prime minister Tony Blair, himself a Catholic, has said he is “shocked and horrified” by the murder of Sir David.

“David and I came into Parliament together in 1983,” he said in a statement.

“Though on opposite political sides I always found him a courteous, decent and thoroughly likeable colleague who was respected across the House,” he wrote.

“This is a terrible and sad day for our democracy.”

The Metropolitan Police said there was “a potential motivation linked to Islamist extremism”.

A 25-year-old British man was arrested at the scene on suspicion of murder, and police said they were not seeking anyone else over the death.

As part of the investigation, officers are currently carrying out searches at two addresses in the London area, the Met said.

The force believes the man acted alone but inquiries into the circumstances of the incident are continuing.
The man is in custody in Essex, police added.

Government sources have told the BBC he is a British national who, from initial inquiries, appears to be of Somali heritage.