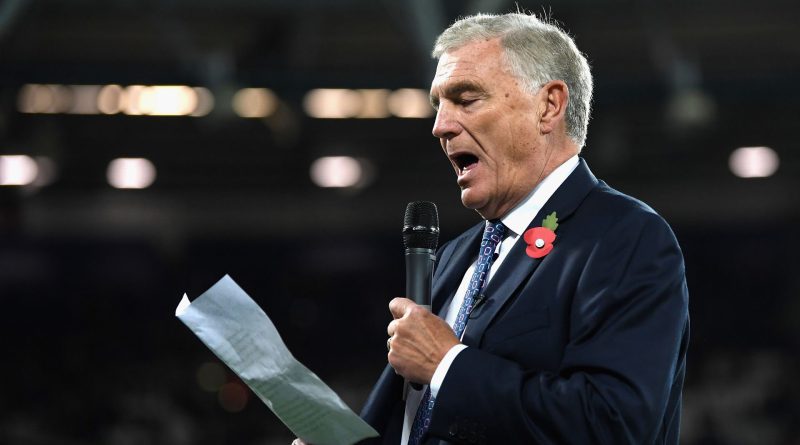 There aren’t many things I’d care to remember about Liverpool’s shock defeat at West Ham last weekend, but there’s one moment that will always stay with me. Before the match the players of both teams took to the centre circle and linked arms, as a shower of red poppies came cascaded down. A trumpeter played the Last Post, and former England Team captain Sir Trevor Brooking (pictured) read those iconic lines of the poet Lt Colonel John McCrea: “In Flanders fields the poppies blow, Between the crosses, row on row ….”

In a country that is increasingly being pulled apart by political, social and ideological divisions, the red poppy of remembrance remains for me a rare uniting symbol of our common humanity.

The roots of the British legion’s Poppy Appeal go back over a century, when the seeds were sown by French Catholic academic Anna Guérin. Madame Guérin was so moved by McCrea’s poem and his image of the poppies that she pledged to travel the world raising support for war widows and orphans.

Her impassioned address to the Catholic Women’s League of Canada in Toronto in 1921 enflamed a worldwide Poppy Appeal movement that is still going strong today.

When she returned from Canada, she set out from Liverpool to London, convinced she could persuade the fledgling British Legion to accept her idea. She also knew she could help it to organise the appeal nationwide, as her experience with war widows had convinced her of the value of using women volunteers for a network of distribution and collection. She offered to fund the manufacture of a million poppies in France, which the British Legion accepted.

Madame Guérin would be delighted to know that this week more than 40,000 collectors have been out on UK streets ahead of Remembrance Sunday, still selling her beloved poppies and raising funds for exactly the purposes she felt passionate about.

Sadly though, her name has been all but erased from history. Mysogony was almost certainly to blame. Women had only just fought their way to getting the vote in 1918, and there was also a lot of resentment that women had taken men’s jobs at home during the war, and had done them exceptionally well. Being French, and a very capable orator, probably didn’t help much either. The British press of the time picked up enthusiastically on the Poppy Appeal, but her name was rarely mentioned.

Madame Guérin remains a woman of considerable importance whose contribution to Remembrance Day ought to be acknowledged more fully.

Back at the West Ham ground, the Poppy Appeal is a recent adoption – Minute silences only began to pop up at football grounds some 20 years ago, and footballers really only started wearing the poppy in 2009, following a campaign by the Daily Mail.

Ironically it was Liverpool FC that incurred the Mail’s wrath in November 2009 when it refused to allow its players to play their weekend fixtures with a poppy embroidered on their kit. The Mail had a field day and great headlines after Liverpool FC said that their campaign suggestion was declined because the red poppy wouldn’t show up on their red shirts! Manchester United followed suit with the same excuse, but both teams were blown out embarrasingly by red-shirted Arsenal FC, who said they would display the poppy on their team shirts. (For the football record, West Bromwich Albion also agreed to embroider the poppy on their red away shirts that year).

But deeper and more challenging arguments about the politicisation of the poppy have also come from footballers. Manchester United footballer Nemanja Matic movingly explained to The Sun newspaper last week he didn’t wear the poppy during last weekend’s 3-0 win at Tottenham because “for me it is only a reminder of an attack that I felt personally as a young, frightened 12-year-old boy living in Vrelo, as my country was devastated by the [NATO] bombing of Serbia in 1999.”

He added: “I do not want to undermine the poppy as a symbol of pride within Britain or offend anyone, however, we are all a product of our own upbringing and this is a personal choice for the reasons outlined.”

Wigan athletic defender and Republic of Ireland international James McClean has also famously/notoriously refused to wear the traditional Remembrance Day poppy on his shirt each and every year since first moving to England from Northern Ireland to join Sunderland in 2011.

In a 2014 open letter to Wigan Athletic manager and fellow Irishman Noel Whelan, for whom he was playing at the time, McClean said: “ I have complete respect for those who fought and died in both World Wars – many I know were Irish-born I mourn their deaths like every other decent person and if the Poppy was a symbol only for the lost souls of World War I and II I would wear one.

“For me to wear a poppy would be as much a gesture of disrespect for the innocent people who lost their lives in the Troubles – and Bloody Sunday especially – as I have in the past been accused of disrespecting the victims of WWI and WWII. It would be seen as an act of disrespect to those people; to my people”.

Such politicisation is nothing new. Way back when Madame Guérin was talking to the British Legion about her poppy appeal idea, she was supported enthusiastically by the then former commander-in-chief of the British forces, Earl Haig. Unfortunately Haig had serious delusions of the glories of war that had proved catastrophic for the thousands of young soldiers – Irishmen especially – that he thought were reasonable cannon fodder for insane assaults on a powerful and in many ways better-prepared enemy.

If they symbolise anything, the poppies of Flanders are a memorial not to Earl Haig’s  charitable efforts, but to his arrogance and stupidity. So maybe footballer McClean has a point.

Whatever the reasons that lead us to wear/refuse to wear a poppy this weekend, our choices can never be anything but ‘political’. We can’t in any way remember our wars and mourn our dead without ascribing some meaning to the violence and the victims. So the poppy has an intrinsic symbolism, but equally that symbolism is highly personal and individual and should not be attached to nuanced ideologies or distorted concerns about nationalism or the glorification of war.

I’m not a nationalist chauvinist, and I certainly don’t revel in the carnage of wars. I have always been, and will always hope to remain, a passionate pacifist who is appalled at the utter waste of human life, and failings of people to talk, that result in warfare as a stupid and destructive means of settling disputes.

I also rage at the lies of military recruitment campaigners who target our low income towns and head into schools in deprived areas offering glamorous career and travel opportunities to young men and women desperate for an escape from their troubled circumstances.

That said, I will remain eternally grateful for those brave young men and women who don’t share my cowardice, and have been prepared to ‘stand on the walls’ so I, and my family, can sleep soundly at night.

Some of them will never return from their watch and, for that reason, I will wear my red poppy with pride this weekend.

In Flanders Fields
BY JOHN MCCRAE

In Flanders fields the poppies blow
Between the crosses, row on row,
That mark our place; and in the sky
The larks, still bravely singing, fly
Scarce heard amid the guns below.

We are the Dead. Short days ago
We lived, felt dawn, saw sunset glow,
Loved and were loved, and now we lie,
In Flanders fields.

Take up our quarrel with the foe:
To you from failing hands we throw
The torch; be yours to hold it high.
If ye break faith with us who die
We shall not sleep, though poppies grow
In Flanders fields.

Joseph Kelly is a Catholic writer and publisher. He is founder of www.thecatholicnetwork.co.uk