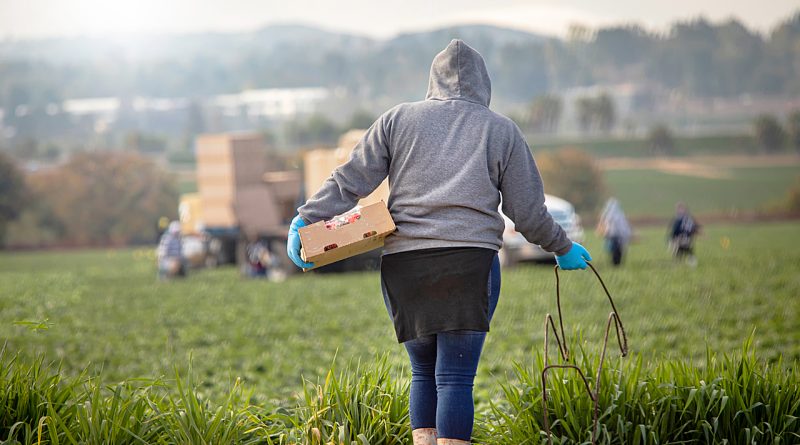 Hundreds of Ukrainians are believed to be living and working informally in Britain after escaping from farms they were working at, with many claiming to have been subjected to conditions of modern slavery.

Ukrainians made up by far the largest proportion of workers in the UK on seasonal worker visas in 2021. Of the 29,631 visas issued under the T5 seasonal work scheme, two-thirds (19,920) were given to Ukrainians. The Scottish Refugee Council estimates there are up to 6,000 currently in the UK.

The farm workers are not eligible for the two main government schemes that support Ukrainian refugees – the family scheme and the community sponsorship scheme.

From 3rd May, the Ukraine extension scheme will be open for applications. This will allow people to stay for three years and switch to a different visa route, allowing them to seek alternative employment. However, it does not apply to those not working on farms at the time applications are made.

The Guardian has spoken to one Ukrainian worker who is in a state of acute distress about her situation after fleeing conditions on farms that she said were “akin to modern-day slavery”. She is an IT expert with two university degrees and came to the UK with her partner, who has almost finished his training to become a doctor, in the hope of earning money.

She has provided an account almost 3,000 words long to the Work Rights Centre, a charity that helps migrants to access employment justice. It details appalling working conditions on the farms she and her partner worked on from August 2021 until they escaped in January.

She and her partner are now doing cleaning and construction work jobs respectively in the underground economy.

“We have come across many, many other Ukrainians who, like us, have run away from farms, cannot return to Ukraine and so have been forced to work here illegally,” she said. “I feel like I am a hostage in the UK. My parents have told me I must not go back to Ukraine under any circumstances because our city is being shelled. I feel trapped.”

She added: “Nobody cares what happens to seasonal workers. I thought our rights would be well protected in the UK but this has not happened. Working on the farm is probably one of the worst experiences and worst treatment of my life.”

She and her boyfriend worked on a cherry farm, where they were not allowed to wear gloves, leading to their hands bleeding and skin beginning to peel off.

She said workers on one farm staged a protest over the poor conditions and were punished by being suspended for a week.

“They set unachievable targets,” she said. “Through threats and humiliation, people were forced to work tirelessly wearing off the skin on their hands and feet until it bleeds. If a person fell off a stepladder they were sent to the campsite to recover on their own or flew home.”

On the huge farm workers’ campsite she and her partner were living on, all but 38 workers fled. She said: “People left to work illegally in the cities in order to solve their financial problems and protect their wellbeing. I will never go to work on any of the farms again – there are no happy stories. Everyone runs away.”

A review by the Home Office and the Department for Food, the Environment and Rural Affairs (Defra) published at the end of last year found that seasonal workers on a post-Brexit pilot scheme launched in 2019 to harvest fruit and vegetables were subjected to “unacceptable” welfare conditions. Issues cited by some workers included a lack of health and safety equipment, racism, and accommodation without bathrooms, running water or kitchens.

Graham O’Neill, the policy manager at the Scottish Refugee Council, said: “It is dreadful that hundreds of Ukrainians here, worried sick about family, friends and war crimes at home, now find themselves destitute, their seasonal visas expired due to having to flee conditions on farms.”

He called on the home secretary to give seasonal workers the right to remain in the UK and bring family members to safety here.

Dr Dora-Olivia Vicol, the director of the Work Rights Centre, said: “I’m extremely concerned for the safety of Ukrainians who had to flee exploitative work conditions on British farms and have since become undocumented.”

She said many had resorted to working precariously in the underground economy. “The Home Office should acknowledge that the war in Ukraine is a humanitarian crisis, and offer protection to all Ukrainians in the UK, documented or otherwise,” she said.

A government spokesperson said: “Ukrainians on seasonal worker visas can apply for three years’ leave under the Ukraine extension scheme. Under no circumstances should any seasonal workers in the agricultural sector be forced to work in exploitative conditions. We strongly advise any people in these circumstances to report issues to the police so steps can be taken for their safeguarding and wellbeing.”