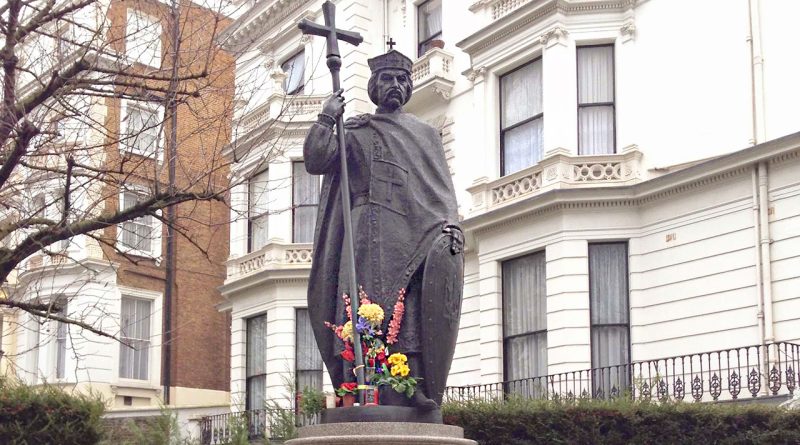 The bishop for the Ukrainian Catholic community in the UK is leading prayers from London on a day of national unity amid the threat of invasion by the Russian Federation.

Bishop Kenneth Nowakowski is unifying people in Britain with those in Ukraine who are taking part in the show of solidarity while troops are massed on its borders.

Bishop Nowakowski told Metro.co.uk: “President Zelensky made clear that we are not an aggressive nation and need to stand in unity, that’s an important message for people to hear from their leader.

“We’ll be praying here in the cathedral and throughout our churches and in the Ukrainian communities throughout the UK that there will be no further escalation of the war.

“We’ll be in solidarity with our brothers and sisters in Ukraine and throughout the world.

“With this threat of invasion, the people of Ukraine need to know they are not alone and the world is standing with them and their brothers and sisters in emigration have not forgotten them and are here with them in their time of threat and need.”

Vladimir Putin has an estimated 130,000 troops massed on the borders with Ukraine and thousands more in the Black and Azov seas.

Bishop Nowakowski views the present tensions as the continuation of the conflict with Russian-backed separatists in Ukraine’s eastern Donbass region that broke out in 2014.

“Over the last eight years over 14,000 people on the Ukrainian side have lost their lives in the war in the Donbass area,” he said,  “and over 1.5 million people have found themselves displaced in Ukraine.

“We don’t know the toll on the Russian side because that hasn’t been made public. Any kind of further invasion will have great impact on loss of life and the ability to maintain normal lifestyles.

“While we are seeing on the news that Russia is pulling back some of its troops it still has more than 100,000 soldiers at the border and any country has to be a little edgy on that.

“One has to ask, what threat does Ukraine have to a country that controls 11-and-a-half time zones?

“Has Ukraine invaded anybody in the last 500 years?”

‘This would be a tragedy for everyone.

‘If we want peace in the world, we have to start with peace in our own home,” said Bishop Nowakowski.

“If we live our lives at home peacefully, being able to treat each other with dignity, then that will have a great impact on our local community, our nation and a global impact.

“If we are not promoting peace in our families and communities then it’s very difficult for us to assume there can be anything achieved at an international or global level.

“Perhaps the sight of a successful democracy emerging at the borders of Russia is more of a threat than joining Nato would be,’ bishop Nowakowski said.

“Because if the neighbours are looking over the fence and seeing a successful former Soviet nation they might start asking questions about their own democracy.

“A failed Ukrainian state could be an advantage and that might not have to entail an invasion, it could just be a continuation of this frozen war.

“There has been a war going on for eight years in Europe and this of course naturally has an impact on human lives and the success or failure of a state.’

The Church is also taking part in a humanitarian appeal by the Ukrainian community, aimed at providing relief from ‘cold, hunger and violence’ in the event of an invasion. Organisers have warned that millions face being displaced if Moscow’s war footing turns into military action.

Bishop Nowakowski, 63, is originally from Canada but has lived in the UK since being appointed Ukrainian Eparchial Bishop of the Holy Family Eparchy in London two years ago.

On Saturday, he is due to lead prayers for the ‘Heavenly Hundred’ who were shot by snipers during the Maidan uprising in 2014.

He will join community leaders at the Statue of Saint Volodymyr in Holland Park for the service in memory of those who lost their lives demanding Ukraine move towards the EU and away from Russia and in the following Donbass war.

For more information about the appeal visit here.