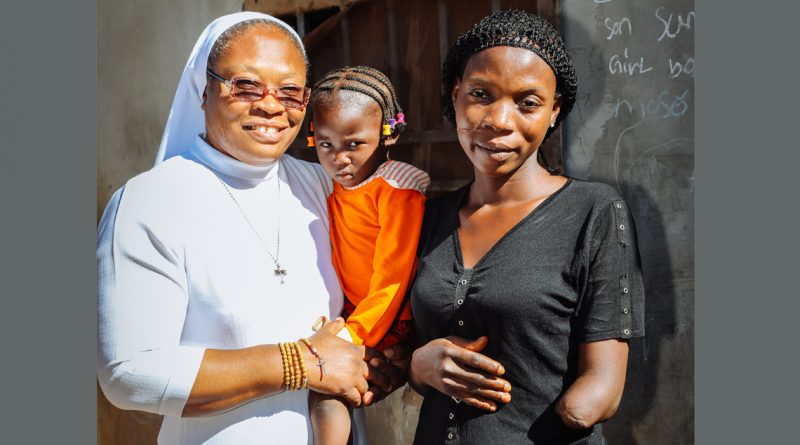 Rachel* and her daughter, Peace, barely survived an attack on their village. They are now being helped by the Women’s Interfaith Council, which features in Missio’s World Mission Sunday 2021 campaign. Rachel’s village is one of the many in northern Nigeria that are caught up in conflict between settled farmers and militant Fulani (nomadic) cattle herders. Here she shares her story …

Life before the crisis

There are many families in my village. My family are farmers, growing sugar cane and corn.

Before the crisis deepened, there were small incidents but we were living together peacefully for a long time. The herdsmen’s cattle used to eat the farm crops occasionally, but when they were seen, people didn’t attack them, they just drove them away. They would report it to the chief. The chief would either grant a pardon or wait for compensation, depending on the situation.

But when our village was attacked, I was driven away.

The day everything changed

My own mother was blind; because of this, she did not know which direction to run. She ran straight into the men and she was killed. My mother-in-law was also killed.

While I was running, I was blocked by two people. And it was there that my daughter and I were attacked. My son was killed. He was seven years old.

I cannot say exactly what happed. But after I was wounded, I think I fainted for some time. When I woke up, I discovered that my hand was cut off.

After the killings and the burning of houses the attackers left and the police came on a rescue mission. They picked up those who were still alive and brought them to St Gerard’s Hospital in Kaduna. My daughter and I were both taken there, but separately. I later learned that my husband had also escaped.

When I recall what happened I find it very difficult to breathe. When thinking about those who killed my son, if they are still alive, I pray: may God forgive them because they don’t know what they have done.

What Rachel has been through is unimaginable. Thankfully she is being supported by the Women’s Interfaith Council (WIC), an organisation started by missionary Sisters which seeks to empower women and build peace between Muslim and Christian communities. The WIC brings women of different faiths together to provide care and rehabilitation, trauma counselling, and vocational training for women.

World Mission Sunday – the one day in the year when the entire global Church comes together in support of mission – will happen on 24th October this year. Coordinated by Missio, this special day is celebrated in every Catholic community in the world. It is a moment of grace to express solidarity with our brothers and sisters in Christ who are living in situations of poverty, violence and oppression.

The theme the Holy Father has chosen this year is: ‘We cannot but speak about what we have seen and heard’ (Acts 4:20). In his message for World Mission Sunday, Pope Francis says:

Once we experience the power of God’s love we cannot help but proclaim and share what we have seen and heard. Jesus’ relationship with his disciples and his humanity shows us the extent to which God loves our humanity and makes his own our joys and sufferings, our hopes and our concerns.

Celebrating World Mission Sunday is so important and relevant in these times. If we are to emerge from all our present global problems stronger in our commitment to Jesus and the coming of his Kingdom of peace and justice, we must work together, helping and supporting each other across the world. World Mission Sunday is about expressing the solidarity that comes from being the One, Holy, Catholic and Apostolic Church.

To find out more about this appeal and donate to help missionary projects like this one around the world, please click here

*Rachel’s name has been changed to protect her identity