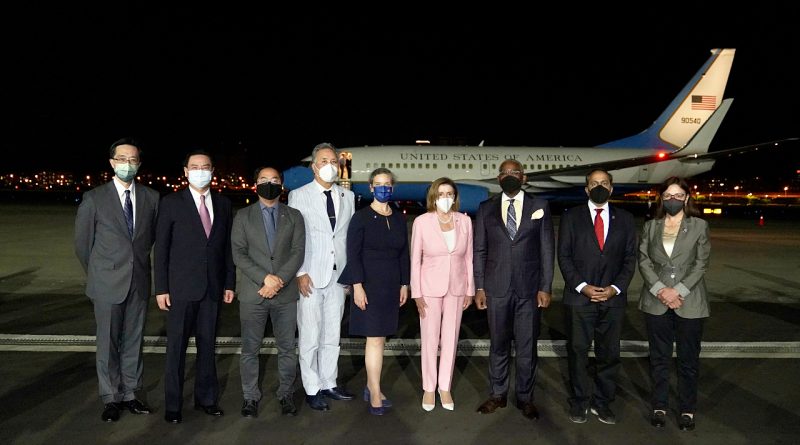 As if the world didn’t have enough to worry about with the recent nuclear annihilation posturing that has been swirling around Russia’s war in Ukraine, we now seem to have another worrying conflict brewing in the South China Sea.

When a plane carrying US House Speaker Nancy Pelosi’s landed in Taiwan on Tuesday night it marked a very deliberate and significant show of US support for Taiwan, despite China’s repeated threats of retaliation if the visit took place.

Pelosi’s stop in Taipei with a congressional delegation was the first time a US House speaker has visited Taiwan in 25 years and – as we’ve seen – the trip has thrown significant fuel on the fire of already simmering US-China relations.

Within hours of her plane touching down China announced its intention to conduct live-fire exercises in six areas encircling Taiwan from this morning through to this Sunday. Some of the zones encroach on Taiwan’s territorial waters, and the military drills are “unprecedented,” according to a report China’s state-run tabloid Global Times today.

“Conventional missiles are expected to fly over the island of Taiwan for the first time, the PLA forces will enter area within 12 nautical miles of the island and that the so-called median line will cease to exist,” the article said, citing experts.

No sooner had Pelosi’s departed yesterday, than China dispatched 27 warplanes into Taiwan’s air defence identification zone, with 22 of them crossing the median line of the Taiwan Strait. Taiwan’s defence ministry website was also hit with a cyberattack overnight and temporarily was taken offline.

There has also been a lot talk of economic restrictions on Taiwan as well, and yesterday Beijing announced restrictions on the import of citrus fruits and frozen mackerel from Taiwan, and banned the export of natural sand – all presumably of some significance to the Taiwanese economy.

The tensions derive from the status of Taiwan, a democratic island at the junction of the East and South China Seas of 23.9 million people that China regards as a wayward province that it has vowed to retake by force if necessary. For its part Taiwan regards mainland China as historically its property, taken forcibly from them by the Chinese Communist Party (PRC) in 1949 during the Chinese Civil War.

Thus Taiwan is officially named The Republic of China (ROC), and even represented mainland China as a member of the United Nations until 1971, when the UN voted to recognise the PRC instead. Taiwan continued to claim it was the sole legitimate representative of China until well into the 1990s, when its incredibly rapid commercial and industrial growth democratised the country and turned its focus towards independent recognition and the promotion of a distinctly Taiwanese sense of identity.

Presently, only 13 of the 193 UN member states and the Holy See maintain formal diplomatic relations with Taiwan, though there is far wider tacit support for a democratic nation’s struggles against its hawkish Communist neighbour.

The Pelosi visit has been explained as the US’s unstinting support for a democratic ally, but – perhaps sensing that the weaknesses of Russia might lead to a wider collapse – it’s also unquestionably designed to ramp up already simmering China-Taiwan tensions as the US seeks to extend its theatre of war to East Asia. But this is an extreme gameplay in a world where we are already at the very edge of catastrophe.

Just two days ago UN head Antonio Guterres warned that a misunderstanding over Ukraine could spark nuclear destruction as the United States, Britain and France continue to prod Russia to stop “its dangerous nuclear rhetoric and behaviour.”

At the opening of a key nuclear Non-Proliferation Treaty (NPT) conference in New York, Guterres warned that the world faced “a nuclear danger not seen since the height of the Cold War.”

Citing Russia’s war with Ukraine and tensions on the Korean peninsula and in the Middle East, Guterres said he feared that crises “with nuclear undertones” could escalate.

“Today, humanity is just one misunderstanding, one miscalculation away from nuclear annihilation,” Guterres told the tenth review conference of the NPT, an international treaty that came into force in 1970 to prevent the spread of nuclear weapons.

“We have been extraordinarily lucky so far. But luck is not a strategy. Nor is it a shield from geopolitical tensions boiling over into nuclear conflict,” he added, calling on nations to “put humanity on a new path towards a world free of nuclear weapons.”

Thankfully there seems to be a genuine reluctance from President Putin and the Russian regime to hit the nuclear button. At the same NPT conference Vladimir Putin said: “We proceed from the fact that there can be no winners in a nuclear war and it should never be unleashed, and we stand for equal and indivisible security for all members of the world community.”

Unfortunately the same logic may not be operating in Washington, where some deluded individuals actually seem to think that geography and the 350 nuclear Chinese warheads to the US’s 5,000 could just make a nuclear war winnable.

For its part the Vatican is in a highly delicate position, which may explain its silence over this week’s events.

Vatican relations with China have been a hot button and controversial topic throughout Pope Francis’ papacy. There are more than 12 million Catholics in China who have been worshipping under a tense ‘dual’ hierarchy of bishops appointed by China and bishops appointed by the Vatican that rarely coincided. After four years of the most delicate diplomatic discussions, the Vatican sealed a secret deal with China in 2018 which we believe finally allows the Vatican to have the final say in the appointment of Chinese Catholic bishops. It’s a measure of the tensions and delicacy that we don’t actually know the precise details, except that the deal lasted for two years, was renewed in 2020 and is up for renewal again this October!

The deal met with significant international disproval, and from within the Catholic Church itself, being seen as the Church moving far too close to a questionable Communist regime. US President Biden and Taiwanese President Tsai Ing-wen were among the biggest critics.

However, just last month Pope Francis said in an interview that he was hopeful that the agreement will be renewed in October, even though it has actually so far produced very little in terms of change – so far just six new China bishops and the regularisation of seven that the Chinese government had appointed without Vatican approval.

By way of contrast, there are just 200,000 Catholic in Taiwan, and the Church enjoys excellent and stable relations with the state – for instance, on 18th July last year Taiwanese President Tsai Ing-Wen attended the installation ceremony of Archbishop Thomas Chung An-Zu of Taipei in the nation’s capital, where she happily posed for photographs and hailed the positive impact of the Catholic Church on the country.

“Over the past few decades, the Church has helped Taiwan society in so many ways and at so many levels that it is impossible to describe them in a few words or a few days,” Tsai said.

The Catholic Church in Taiwan runs some 50 schools, colleges and universities and Fujen Catholic University in Taipei is an internationally acclaimed institution. Taiwan Catholic Regional Seminary in Taipei is a melting pot for training priests from all over East Asia including China, and the Church also operates seven large hospitals and about 100 nursing homes across the country.

On the downside, earlier this year the Vatican removed its unofficial representatives in Taiwan and has so far not appointed replacements, leading many Taiwanese Catholics to worry about the future, especially now that the US seems intent on enflaming the already precipitous tensions in the region.

Back in March this year, Catholic peer David Alton address the House of Lords on the urgency of the Taiwan situation.

“Is it any wonder the Taiwanese people – a territory which has never been part of the People’s Republic of China – live in dread of a military invasion by the CCP; an apprehension underlined by the illegal seizure of a sovereign state, Ukraine by Putin, who as we saw at the Genocide Olympics, is a close ally of Xi Jing Ping,” said Lord Alton.

“We must stand in solidarity with Taiwan -a free people in a vibrant democracy. Taiwan threatens no one and believes in peaceful coexistence. Authoritarianism is on the march. By standing with Taiwan we will be leading other nations in defying it.”

This may not suit the Vatican, but it looks like sooner rather than later some very tough choices are going to have to be made between diplomatic overtures to an oppressive regime, and the defence of a legitimately democratic nation.

Joseph Kelly is a Catholic writer, and founder of www.thecatholicnetwork.co.uk