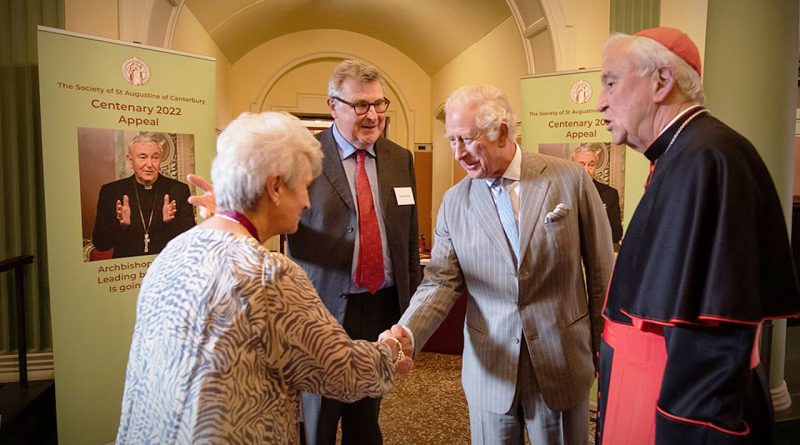 The Society of St Augustine of Canterbury was honoured to welcome His Royal Highness The Prince of Wales as the principal guest at a special Centenary Reception hosted by His Eminence Cardinal Vincent Nichols, at Archbishop’s House on 10 May 2022. He welcomed The Prince of Wales and thanked him for his gracious presence. His Royal Highness spoke personally to most of the hundred attendees.

His Grace The Duke of Norfolk, President of the Society, entertained guests with tales of how the Society had striven to assist with the maintenance and improvement of Archbishop’s House since its foundation by Cardinal Bourne in 1922.

The Cardinal kindly acted as auctioneer of special items donated by members and over £6,000 was raised towards the Centenary 2022 Appeal. The Society is marking 100 years of service to the Archbishops of Westminster by raising £100,000 towards the costs of reducing energy consumption and carbon emissions at Archbishop’s House. Cardinal Vincent, leading by example, is determined that the carbon emissions from the magnificent Grade II listed building will be reduced by circa 40% within the next few years.

The Chairman, Mary Goodwin, thanked all those present for their support of the Society and its work. She was delighted to announce that the Centenary 2022 Appeal had already reached a quarter of the target figure and she presented Cardinal Vincent with an initial contribution towards the cost of the works.

During the event, Michael Henderson was invested as a Knight of St Gregory by the Cardinal for his lifetime of service to Catholic Education. Mr Henderson had also served for many years as the investments manager of the Society.

To support the Centenary 2022 Appeal and to join the Society, please visit the Society’s website.