Please remember our dearly departed in your prayers:

GALVIN, Timothy John Joseph (Tim). Scunthorpe. Please pray for the Repose of the Soul of Tim Galvin aged 60 years. Dearly loved son and carer of Peggy and the late Mick, much loved brother of Denis, Kathy and Micky, dear brother in law of Mandy, Ralph and Tracey, loving uncle of Michael, Patrick, Elizabeth, Rebecca, Carl, Shannon, Danny, Curtis and Harriet, special great-uncle of Reggie, Flora and Neave and a good friend to many.

PLEASE EMAIL US YOUR NOTICE: joseph@thecatholicnetwork.co.uk

Prayer in Times of Anxiety and Fear

Dearest Lord, teach me to do thy will

Come, Holy Spirit, Divine Creator, true source of light and fountain of wisdom! Pour forth your brilliance upon my dense intellect, dissipate the darkness which covers me, that of sin and of ignorance. Grant me a penetrating mind to understand, a retentive memory, method and ease in learning, the lucidity to comprehend, and abundant grace in expressing myself. Guide the beginning of my work, direct its progress, and bring it to successful completion. This I ask through Jesus Christ, true God and true man, living and reigning with You and the Father, forever and ever.
Amen

Do not look forward in fear to the changes in life; rather, look to them with full hope that as they arise, God, whose very own you are, will lead you safely through all things; and when you cannot stand it, God will carry you in His arms.

Do not fear what may happen tomorrow; the same understanding Father who cares for you today will take care of you then and every day. He will either shield you from suffering or will give you unfailing strength to bear it. Be at peace, and put aside all anxious thoughts and imaginations.

Do not look forward in fear to the changes in life; rather, look to them with full hope that as they arise, God, whose very own you are, will lead you safely through all things; and when you cannot stand it, God will carry you in His arms.

Do not fear what may happen tomorrow; the same understanding Father who cares for you today will take care of you then and every day. He will either shield you from suffering or will give you unfailing strength to bear it. Be at peace, and put aside all anxious thoughts and imaginations.

Give me the Grace, Good Lord

Give me the grace, Good Lord:
– To set the world at naught. To set the mind firmly on You and not to hang upon the words of men’s mouths.

– To be content to be solitary. Not to long for worldly pleasures. Little by little utterly to cast off the world and rid my mind of all its business.

– Not to long to hear of earthly things, but that the hearing of worldly fancies may be displeasing to me.

– Gladly to be thinking of God, piteously to call for His help. To lean into the comfort of God. Busily to labour to love Him.

– To know my own vileness and wretchedness. To humble myself under the mighty hand of God. To bewail my sins and, for the purging of them, patiently to suffer adversity.

– Gladly to bear my purgatory here. To be joyful in tribulations. To walk the narrow way that leads to life.

– To have the last thing in remembrance. To have ever before my eyes my death that is ever at hand. To make death no stranger to me. To foresee and consider the everlasting fire of Hell. To pray for pardon before the judge comes.

– To have continually in mind the passion that Christ suffered for me. For His benefits unceasingly to give Him thanks.

– To buy the time again that I have lost. To abstain from vain conversations. To shun foolish mirth and gladness. To cut off unnecessary recreations.

– Of worldly substance, friends, liberty, life and all, to set the loss at naught, for the winning of Christ.

– To think my worst enemies my best friends, for the brethren of Joseph could never have done him so much good with their love and favour as they did him with their malice and hatred.

These minds are more to be desired of every man than all the treasures of all the princes and kings, Christian and heathen, were it gathered and laid together all in one heap. Amen.

Irwin, Fr David John, Westminster, who died on 27th October at home in Findon village, Worthing, where he had been living in retirement. Fr David was born on 1st March 1944 and was ordained as a Catholic priest on 4th December 1995 in Westminster Cathedral having left ministry in the Church of England and then Received as a Catholic in May 1994. Sympathy is extended to Fr David’s family and friends, and to the clergy and parishioners among whom he lived and ministered as an Anglican and as a Catholic.

Eccleshare, Canon David On 7th October 2021 in hospital and Fortified by the Rites of Holy Mother Church, Father David aged 84 years. “Pray for his family and friends” Requiem Mass will be offered in Our Lady of Lourdes R.C.Church on Thursday 21st October at 2.00pm, prior to Requiem Mass and Interment at Pantasaph Franciscan Friary, Monastery Road, Pantasaph, Holywell CH8 8PN at 12 noon on Friday 22nd October. Donations in memory for Caritas may be sent to Howarth’s Funeral Service, 2 – 6 Balmoral Road, Farnworth BL4 9HR Tel: 707755 www.1hfs.co.uk

Drake-Brockman, Fr David became a Catholic priest at the age of 57, having previously been a clergyman in the Church of England. He was ordained at St Patrick’s Church, Huddersfield on 23rd March 1991 by Bishop David Konstant and joined a small group of married priests serving in the Leeds diocese who like himself had formerly ministered in the Anglican Church. Although he never held parochial office Fr David became well-known in the Diocese on account of his role for many years as the Administrator of the Diocesan Marriage Tribunal. He went about his work quietly and sensitively, and became a well-respected colleague in the Diocesan Curia. He will also be fondly remembered by the Carmelite Sisters at Wood Hall, for whom he often celebrated Mass in their chapel. Fr David’s later years were marked by ill-health and he was admitted to St James’s University Hospital in Leeds, where he died early on Saturday 9th May 2021.

Sr. Enda (Sisters of Mercy), Hexham & Newcastle. Sr. Enda died peacefully in the early hours of Monday 27th September. She was known by many as Head Teacher of St. Anthony’s School and then Reverend Mother of Oaklea convent. Sr. Enda’s Requiem Mass will be at 1.00pm on Friday 15 October in Oaklea Chapel. Owing to limited capacity, numbers attending are restricted to family members and the Sisters in Oaklea Community. Since a large concelebration is not possible in the chapel at this time, the diocese would appreciate it if priests who knew Sr. Enda well, remembered her in their parish Masses.

May, Br Ambrose May, OFM Cap who passed away peacefully in the presence of his brothers at Greyfriars, Friary, Iffley Road, Oxford on Sunday 12th September 2021. Br Ambrose was born in the parish of St Edmund & St Frideswide, Oxford in 1933. He entered the novitiate with the Capuchins in January 1953, and was ordained to the priesthood on the 29 June 1961. He spent many years as parish priest in various locations, and returned to Greyfriars as parish priest in 2002. He remained in our friary at Oxford since that time.

MacGrail, Deacon Michael who died on Saturday 11th September 2021 fortified by the Holy Sacraments of the Church. Deacon Michael was resident at St Thomas of Canterbury Parish, Walsall, serving that parish for over 20 years. Prior to that, after Ordination, he served in Corpus Christi Parish in Stechford, Birmingham.

Millett, Canon Desmond died in his sleep on Saturday 18th September 2021. He was parish Priest at St Mary’s RC Church on Station Hill, Chippenham. He served as Catholic priest for Chippenham since 1985, and at 92, was probably one of the oldest serving in the country. Canon Millett’s body will be received into The Assumption of The Blessed Virgin Mary, Chippenham on Tuesday 5th October at 4pm followed by Mass.  There will be an additional Mass that evening at 6.30pm. The Funeral Mass will be celebrated on Wednesday 6th October at 11am followed by a private Burial in Chippenham Cemetery.

Eternal rest grant unto them, O Lord, and let perpetual light shine upon them. May their souls and the souls of all the faithful departed, through the mercy of God, rest in peace. Amen.

PLEASE PRAY FOR ALL OUR CLERGY AND RELIGIOUS, LIVING AND DECEASED. 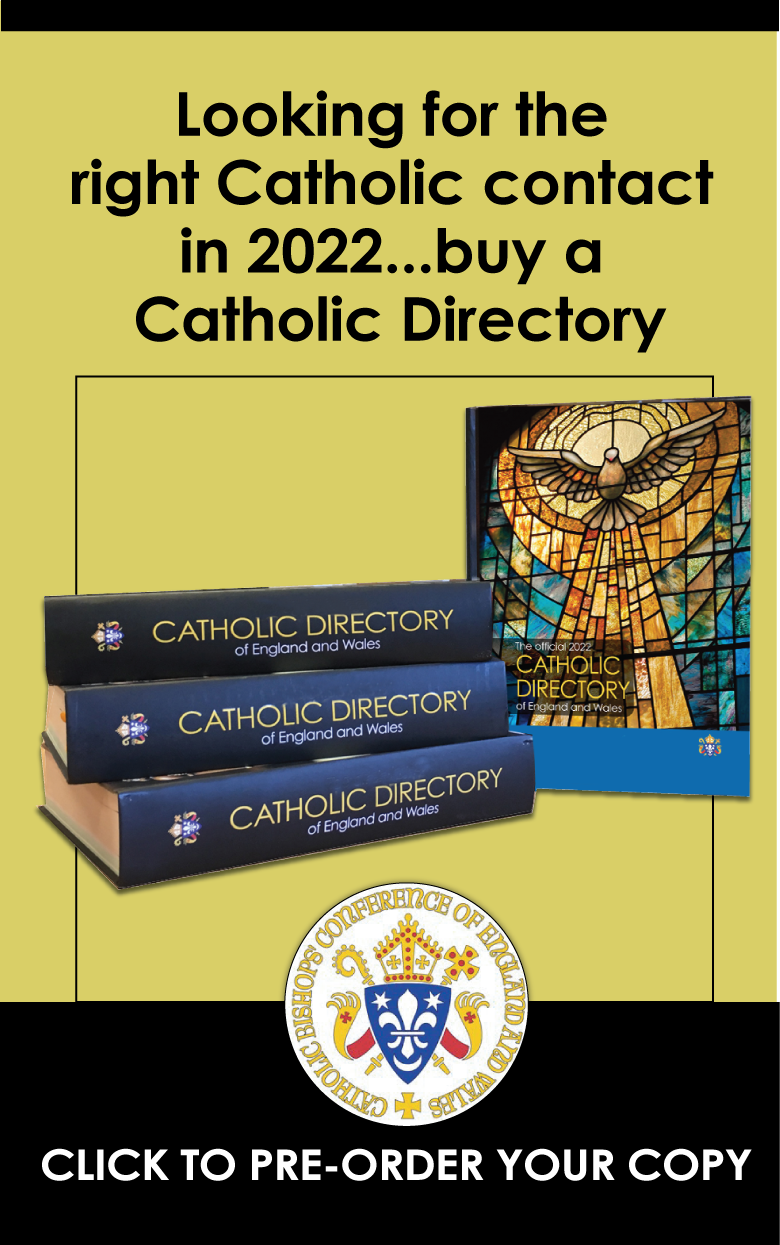