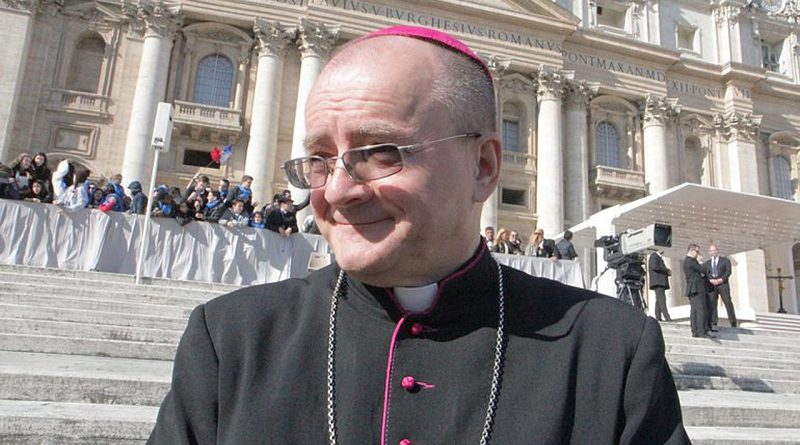 A ROMAN Catholic bishop in Ukraine has praised the courage of hundreds of Polish priests and nuns who remained with their communities after the Russian invasion, while also paying tribute to churches in Britain for showing solidarity with his country.

“Everyone who wished to leave had an opportunity to do so — and, while a few went home or withdrew to other parts of Ukraine, the vast majority have stayed on,” said Bishop Jan Sobilo, an auxiliary bishop in the Ukrainian diocese of Kharkiv-Zaporizhia.

“Ukrainians are aware of the help being given them by Poland; and this war and the sense of a common threat has brought our countries closer. But we’re also grateful for the solidarity and material help being offered by a country like Britain, where we’ve heard about the Ukrainian flags and emblems that are now a common sight in churches.

The Bishop spoke as fighting continued across his eastern diocese, from the largely destroyed port of Mariupol to mostly Russian-speaking Kharkiv.

In an interview with the Church Times on Monday, he said that he had encouraged a group of Carmelite nuns and several Polish priests to leave Russian-occupied areas, fearing that their lack of required permits could endanger them.

He said that clergy from Poland made up half the diocese’s total, however, and that most had been determined to stay, dispensing sacraments and providing humanitarian and spiritual support for residents and people displaced by fighting in Melitopol, Berdyansk, and other towns.

“Luckily, we haven’t heard of deaths and injuries among priests and nuns — or of any direct suffering at Russian hands,” Bishop Sobilo said. “But there are fears that clergy may be barred from normal parish functions, as happened in occupied Donetsk and Luhansk. Citizens of countries belonging to NATO and the European Union could be branded spies, as happened under Soviet rule.”

Polish priests and nuns make up a large proportion of clergy in the seven Latin-rite RC dioceses in Ukraine, and have ministered in the country, often in senior positions, since its independence in December 1991, to make up for a post-Communist lack of native clergy.

Most Ukrainian-born clergy also speak Polish as a second language, having trained in Poland or because they come from ethnic Polish families.

Visiting Poland this week, the Orthodox Ecumenical Patriarch, Bartholomew I, thanked the country and its predominant RC Church for taking in 2.3 million refugees since the 24 February Russian invasion, in addition to the two million Ukrainians already living and working in the country.

“I am here to show solidarity and join in prayer with the millions displaced by this unjustifiable aggression, and by the violence unleashed by Russia against sovereign Ukraine,” the Patriarch said in a speech in Warsaw on Monday.

“Poland has always known what suffering means, respecting freedom of speech and education, economic freedom, freedom of religion, and belief and the right to life. . . It has turned out to be — both the country and its people — a model of generosity, charity, and hospitality.”

Bishop Sobilo said that the Pope’s dedication of Russia and Ukraine to the Immaculate Heart of Mary on 25 March had been marked, sometimes in cellars and bunkers, by priests and lay Christians in Russian-occupied areas, arousing hopes for an end to fighting.

He said, however, that the war looked set to drag on because of a lack of “common understanding and united voices” among Western governments, and said that Ukrainians feared being “left alone without help” once initial support pledges had lapsed.

“Ukraine has shown it can defend itself, and we know we must rely on our military strength; but we also hope God will help us treat the wounds of war so we may return some day to normal relations with Russia,” the Bishop said.

“Ukraine is fighting not just for its own freedom, but for the freedom of Europe — and, despite everything, I believe God has some plan for us and will show mercy through events still to come.”

A Polish priest in besieged Kharkiv told the Church Times this week that some priests had volunteered as front-line chaplains during the fighting, and confirmed that all Polish clergy had been offered a free choice whether to stay or leave, by their bishops and superiors.

“With flights long since cancelled, and all land-routes blocked, we’re praying and doing all we can for our parishioners,” said Fr Wojciech Pasiewicz, who is a Caritas director from Lublin, in Poland.

“There may be dangers to Polish clergy from the Russians, who could seek to curb our Church’s rights, as they did earlier in Crimea. But all that matters now is that this war should end, and people be allowed to return to their homes and parishes.”