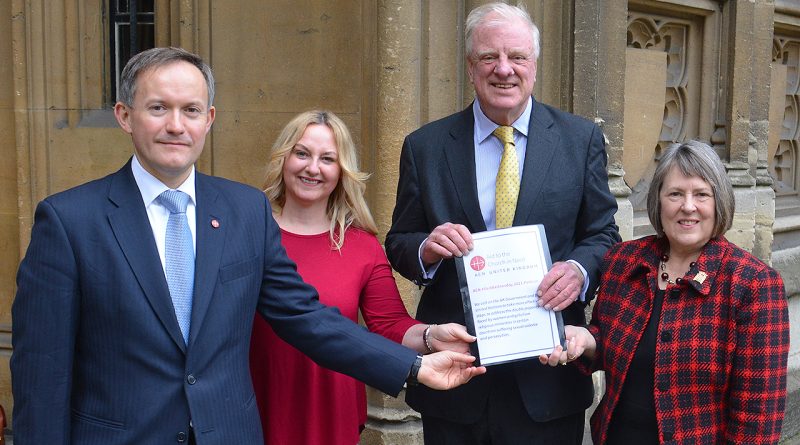 THE Prime Minister’s special envoy for religious freedom has officially received a leading Catholic charity’s petition calling for more action to stop the forced conversion and marriage of Christian and other minority faith women and girls.

Fiona Bruce MP was presented with the 3,210-signature petition by Aid to the Church in Need (ACN) UK Head of Press & Information John Pontifex at a meeting today (Wednesday, 15th December) at the Houses of Parliament in Westminster.

The petition was key to ACN’s #RedWednesday 2021 campaign which climaxed with the launch of the charity’s report Hear Her Cries – the kidnapping, forced conversion and sexual victimisation of Christian women and girls.

Also present for the petition hand-over were Conservative MP Sir Edward Leigh, Scottish National Party MP Dr Lisa Cameron and Morris Johns, secretary to the All-Party Parliamentary Working Group for Pakistan Minorities, who have all campaigned for Christians and other minority faith girls and women.

Receiving the petition on behalf of the UK Government, Mrs Bruce said: “I am extremely grateful to ACN for highlighting the plight of minority faith girls suffering forced conversion and forced marriage.

“I find it very distressing that girls and young women suffer in this way. In my role, I am committed to action to stop this denial of freedom which impacts the lives of so many young girls in such a fundamental way.”

Dr Lisa Cameron announced that, as vice chair of the Foreign Affairs All-Party Parliamentary Working Group, she would call for a meeting with Moazzam Ahmad Khan, the Pakistan High Commissioner to the UK to discuss the issue.

Dr Cameron said: “I have a teenage daughter myself and I am personally committed to rooting out this appalling cycle of violence and denial of religious freedom.”

Sir Edward Leigh said: “Be it in Pakistan, Nigeria, Mozambique, and many other countries besides, we are seeing an epidemic of acts of cruelty and brutality in which young Christian and other faith minority girls and women suffer – and far too little is being done to stop it.”

Speaking in the House of Commons, Sir Edward has repeatedly called on Home Secretary Priti Patel to back ACN’s request to give UK asylum to Pakistan Christian teenager Maira Shahbaz who is in hiding from the man who abducted her, forced her to convert and marry him.

ACN’s petition will also be submitted to the United Nations.

As well as advocacy, ACN is providing aid for survivors of sexual violence and forced conversion, trauma counselling, food and shelter and legal support through agencies such as Pakistan’s National (Catholic) Commission for Justice and Peace.