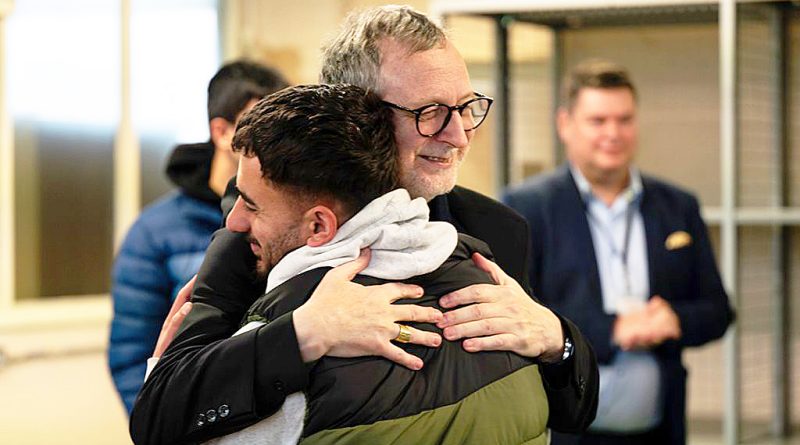 The Apostolic Nuncio, Archbishop Claudio Gugerotti, visited people housed in former army barracks in Folkestone to show the Pope’s solidarity with them as they look to a better future.

Spending the morning of Thursday, 31st March at Napier Barracks, Archbishop Gugerotti listened to the asylum seekers’ stories and learned more about their struggles:

“I came to listen, to hug, and to hear their voices and experiences,” he said. “I wanted to say hello to each of them. Some of the languages I know, some I don’t know, but there is a language which is universal – to show respect, to love them because the Catholic Church is centred on the message that ‘God is love’. I think it is a very good way of exercising one’s mission as a diplomat – to be the expression of the love of Peter and the successor of Peter who conveys the message of Christ that each person is a masterpiece. I think that is very simple.”

The Nuncio, Pope Francis’s representative in the UK, said that the plight of migrants and refugees was a subject close to the Holy Father’s heart.

“Pope Francis asked me to take care of the migrants and to have meetings with them… The Pope wants to go and see the suffering flesh of the Lord. The poor are the suffering flesh of the Lord – and [refugees] are the poor. Now this new generation of people, with hope, do come and they feel that they are ready to build a better future wherever it is possible. We admire the Lord in the creatures that are wounded by life, by their stories, the wars in their countries, their desire to find a better world. This is hope and unfortunately, sometimes in the West, we are not so much a fountain of hope. They have nothing and so they are hopeful and this is a teaching for all of us.”

listen here to a podcast on his visit by Archbishop Gugerotti