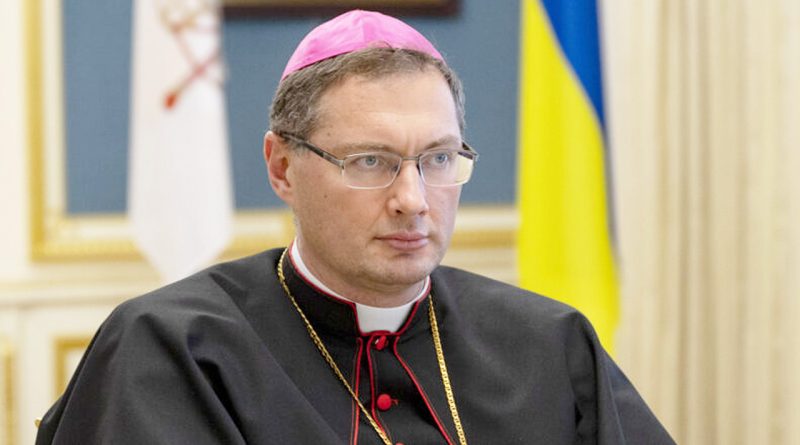 THE Papal Nuncio to Ukraine has described the conflict inflicted on the country as “evil” and “demonic” and said that it can only be defeated with a worldwide campaign of prayer, fasting, humility and love.

Speaking to Catholic charity Aid to the Church in Need (ACN), which has rushed through help for Ukraine, Archbishop Visvaldas Kulbokas said there was a spiritual aspect to the origins of the invasion and that spiritual tools needed to be part of the solution.

Archbishop Kulbokas, who was speaking from battle-scarred Kiev, said: “And so it is during this war, which is not a purely human invention, there is something demonic about it – as there is in all violence.

“And we can only defeat the evil in this war together, all over the world, through fasting, prayer, much humility and love.”

He added: “So, I say to myself, and also to many believers I speak to, that our main weapons…are humility, surrendering ourselves totally to God, solidarity, and love.

“Because, in any case, if we are here for each other, if we are close to God, if we are faithful, He will look after us.”

Archbishop Kulbokas highlighted the current dangers for the people of Kiev.

He said: “Since 24th February, every day and every night there have been missile attacks on several points of the city. We, at the Nunciature, are not in a central area, so for now we have not seen any of the bombings from up close.

“We have witnessed some street fighting quite nearby, not so much these days, but in the previous days. But it is very likely that things will get worse in the coming hours. In other cities like Kharkiv the residential areas have been badly affected…

“Nowadays, nobody in Ukraine can feel safe.”

He added: “[T]he humanitarian crisis is very severe here, and in some other cities in Ukraine. And then there is something that weighs on us, it is not always possible to help.”

Ukraine is a priority country for ACN and the charity recently launched a €1.3million (£1.1million) aid package for the most needy dioceses in the country.

He said: “Any help is appreciated. It is difficult to guess what the needs will be in the future, but a lot of infrastructure is damaged.

“Even from a structural and organisation perspective there will be a lot of work to do, because hundreds of schools, hospitals and homes were destroyed. The needs will be enormous. It will take a very long time.”

Aid to the Church in Need is a Pontifical Foundation directly under the Holy See. As a Catholic charity, ACN supports the faithful wherever they are persecuted, oppressed or in need through information, prayer, and action. Undertaking thousands of projects every year, the charity provides emergency support for people experiencing persecution, transport for clergy and lay Church workers, Child’s Bibles, media and evangelisation projects, churches, Mass stipends and other support for priests and nuns and training for seminarians. Aid to the Church in Need UK is a registered charity in England and Wales (1097984) and Scotland (SC040748). ACN’s UK office is in Sutton, Surrey and there is a Scottish office in Motherwell, near Glasgow and another office based in Lancaster.