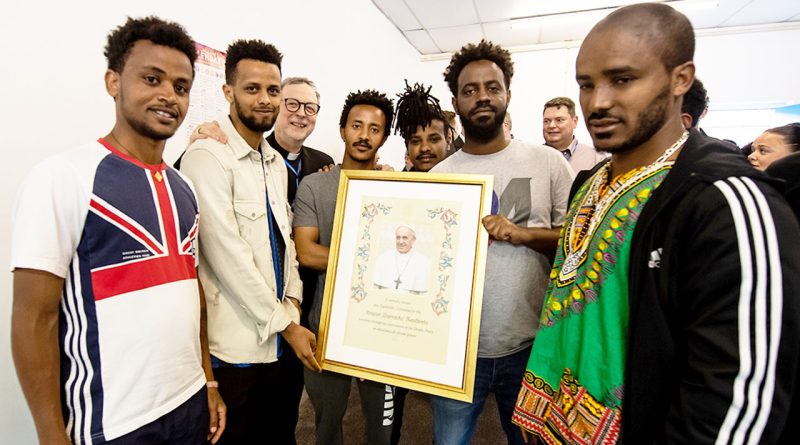 For the second time this year, Archbishop Claudio Gugerotti, the Pope’s representative to Great Britain, visited asylum seekers housed in a former army barracks in Kent to bring the Holy Father’s special blessing and greetings to them as they seek the prospect of a better life without persecution.

Visiting Napier Barracks in Dover the Apostolic Nuncio said he saw Pope Francis’ simple Christian gesture as a sign of solidarity and hope.

“The Pope was very eager to have an idea of how these people lived – these people who came by boat,” said the Nuncio in a recorded interview with The Catholic Bishops’ Conference of England & Wales.

“I was speaking with them. [Some said] it took two, two-and-a-half years to arrive in Great Britain. We had very nice conversations with many of them the first time, and also with the people who take care of them.

When I came back, something very strange happened. I wrote an email to His Holiness, the Pope, explaining that I had gone to the barracks and met refugees. After two days, exactly two days, I received a picture of the Holy Father, his blessing and his handwritten signature.

“The Pope said, “Now go back to the barracks and just convey to these people my blessing – the special blessing that I have sent to you for them.” Which I did. So the reason for today’s trip was to go and give the picture with the blessing of the Holy Father to the residents of Napier Barracks.

“Certainly the Pope is very attentive to their needs. The marginalised, the person in trouble, the person who sometimes is not well-received… well, this is Jesus Christ. This is exactly what happened to Jesus. Jesus told us that all those in that condition and all that is done or given to them, is done and given to Him. It’s simply the Gospel – nothing more, nothing less.

“The group we met was mostly Christian. So the very fact that the Pope, not only decided to give this image, this picture and his greetings, but wanted to sign it personally was a sign of hope. What they need is to imagine they can live well integrated into a community and can work for the good of that community. They want to live a life that is different from the slaughters and tragedies that they have had to see – not only in their counties but also during their travels.

“So you see, it’s a very simple gesture. It’s a Christian gesture. One of the most morally significant people in the world thought of them – took them into consideration, blessed them. It’s an expression of solidarity, which for them is a reason for living and continuing to wait and expect the possibility of a better life without persecution.”