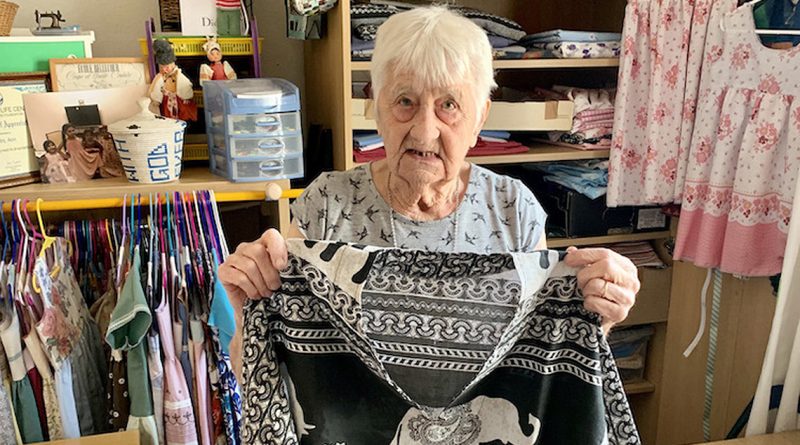 Anna Bayles, a 96-year-old dressmaker from St Thomas of Canterbury in Wymondham, has sent her latest consignment of clothing as gifts to Christian refugees in Jordan.

“We have just dispatched about 700 handmade items of children’s clothing to the 5th Gospel Christians,” reports Arnie McConnell from the Wymondham parish, where Anna is an enthusiastic member.

Anna works each day in her ‘factory’ – the front room of her bungalow – where the walls are covered with photos of children wearing her beautiful products.

“God has given me a gift,” she said, “and I could not live without it.” Anna asks friends and fellow parishioners for second-hand pillowcases, curtains and tablecloths, which she turns into colourful, bright dresses.

5th Gospel Christians, who have received her latest products, is a charity giving direct support to Christian refugee families from Iraq, with a particular focus on the community of 400 people living in Madaba in Jordan. These refugees refused to renounce their faith and were forced to flee when the Islamist terror group ISIS (Daesh) seized the Nineveh Plains in the summer of 2014.

The charity also assists Jordanian parishes coping with the poverty in their own community and schools, with particular focus on the Catholic parish of St John the Baptist in Madaba.

You can read more about their work here.

Anna goes to Mass during the week when she can, and to the Exposition of the Blessed Sacrament on a Tuesday.

“As soon as I come home from church I get onto it,” she said. “Seven days a week. I can make a dress in 45 minutes and a skirt in 20. But I don’t force myself; it just comes naturally. I finish about 4pm. I belong to a couple of clubs, but I don’t have time to go.”

“There is an important message here,” comments Arnie, “about the connectivity between compassion from an inspiring woman living out the Gospel, and a group of Christians supporting a traumatised group of people who have lost everything.”