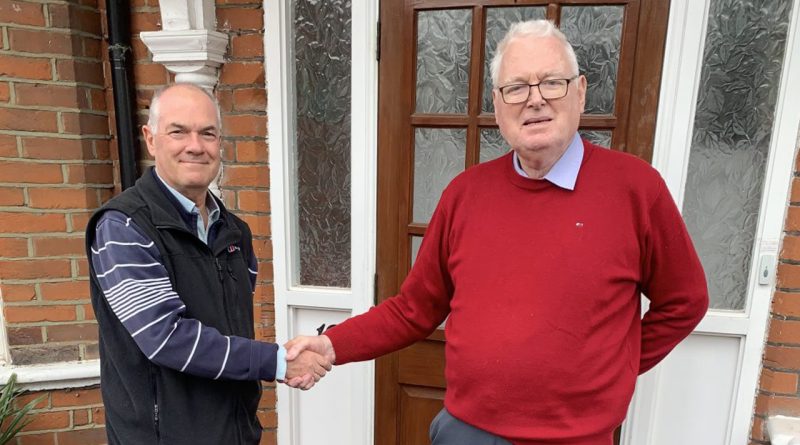 On 23rd November, the feast of St. Columban, Fr Peter Hughes will step down as Director of the Columban Missionaries in Britain, and a new leadership will take over the organisation’s work.

God has carried us through the COVID pandemic in Britain and, faced with this new reality, we have been called to new ways of being a missionary presence.
Fr Peter Hughes

Ahead of his departure, Fr Hughes reflected on his six years in office.

“I have much to be grateful for and I wish to share some of the many highlights filled with God’s grace and blessing,” said Fr Hughes.

“When I was appointed Director in 2015, I knew I would be leading the Columban community in Britain as the whole Society celebrated its centenary year in 2018. Thanksgiving Masses in Birmingham and London were occasions filled with joy and it was a delight to welcome and celebrate with friends and supporters. Many of you have written to share your Columban story, tales of how you first came to know us, and it has been a privilege to read and respond to your letters.

“While serving as Director, I have continued to lead the Justice, Peace & Integrity of Creation ministry in Britain. Growing ever louder has been the voice of those most affected by climate change, and the Columbans are proud to be active members of the Global Catholic Climate Movement, campaigning for justice for the poor and all of God’s beautiful creation.

“God has carried us through the COVID pandemic in Britain and, faced with this new reality, we have been called to new ways of being a missionary presence. At the same time, we know that the pandemic continues to restrict and impact on the lives and ministry of Columbans in other countries, and even more so on the people they serve.

On the feast of St. Columban we will welcome our new leadership team in Britain. Fr. John Boles has been appointed Director of the region and is joined by Fr. Bernard McDermott, who has been appointed Vice Director. I wish them both all the very best in these new positions and would like to take this opportunity to thank Fr. Denis Carter who, as Vice Director for the last six years, has been a huge support to me and to the British region.

As a new leadership team begins their term, I know they will benefit from the way Columban priests, lay missionaries and lay co-workers are working together in mission. This partnership has flourished in our Invitation to Mission and Faith in Action programmes, our advocacy work, our interreligious dialogue and in mission awareness and education in parishes and schools.”

Fr. John Boles left England nearly 40 years ago to work as a missionary priest in South America. He served as an overseas volunteer adviser in Nicaragua from 1983 until 1988. Subsequently, he joined the Missionary Society of St. Columban and did his seminary training in Ireland, the USA, Bolivia and Peru between 1989 and 1995. He was ordained in his home parish of Stockport, Greater Manchester in 1996 and was almost immediately sent back to South America as a priest, ministering in Peru until 2006, Chile from 2007 to 2013 and Peru once again from 2014.

Fr. John has, therefore, spent most of his working life outside Britain and explains, “For the next three years, I look forward to giving back something to my own people in return for all the wonderful generosity you’ve shown me, my fellow Columbans and the folk we accompany out there on the missions.”

With a passion for travel, history and architecture, Fr. John will continue as a member of the Mission Awareness and Appeals team, supporting mission education and promoting mission awareness in parishes across Britain.

Accompanying Fr. John will be Fr. Bernard (Bernie) McDermott, who has been appointed the new Vice Director. A founding member of the British region, Fr. Bernie was the first Director in 1988 and served two further terms between 1998 and 2004. He has also been a regular member of the Mission Awareness and Appeals team. Fr. Bernie brings a wealth of knowledge and experience to his new role and to the task of assisting and supporting Fr. John with leading the Region over the next three years.

“Please join us in praying for the new leadership team here in Britain, as well as for all Columbans around the world also taking up new leadership positions in the Society on the same day,” said Fr Hughes.

To read more about the Columban Missionaries in Britain, go to: https://columbans.co.uk