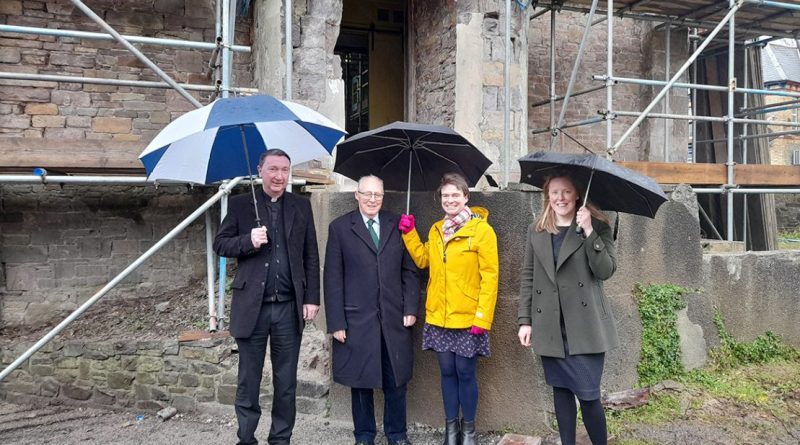 Historic England has awarded a grant of £196,832 to help repair a Catholic Church in Barnstaple, Devon, that closed for worship in 1984 and was threatened with demolition.

The former Church of the Immaculate Conception, also known as Old St Mary’s, is a Grade II listed building. The Diocese of Plymouth is also supporting the cost of the first phase of repairs.

For too long the former church has stood neglected and forlorn: it is an exciting prospect that at last the building can be restored and brought back into use.
Sir Neil Butterfield, Trustee, Diocese of Plymouth

Work has recently commenced to:

The work is due to be completed summer 2022. The building will then dry out while plans for its re-use are fully developed, working with the local community.

The church opened in 1855 to serve the growing community in the Trinity area of Barnstaple. Following its closure as a place of worship in 1984, there were proposals for it to be demolished. Now there is a concerted effort to repair the building and bring it back into use.

“I know the Trinity Street community in Barnstaple have worked hard over many years to persuade the Diocese of Plymouth to repair and restore this church so that it can be used by the community.

“It is wonderful news that the Diocese has started this project and that Historic England has stepped in to help fund the much-needed structural work. I look forward to seeing the plans on how we can bring this amazing building back to life.”

“It’s great to see the repairs to this remarkable building underway. We hope our support, and that of the Diocese, will secure it for generations to come.”

Sir Neil Butterfield, a Diocesan Trustee and Chairman of the Project Board, said:

“The Diocese of Plymouth is very grateful to Historic England for its generous contribution towards the cost of restoring and renovating this important Catholic landmark in Barnstaple.

“For too long the former church has stood neglected and forlorn: it is an exciting prospect that at last the building can be restored and brought back into use.”

The church was one of the earliest post-Reformation Catholic churches to be built in Devon. It was designed to serve the community of the Trinity area of Barnstaple which was growing rapidly in the early 19th century.

It is one of the earliest and arguably the most accomplished piece of Romanesque Revival design in the county.

When the church opened in 1855, the North Devon Journal reported that it had been designed by A W N Pugin (1812-1852), the celebrated pioneer of English Gothic Revival architecture and designer of the interior of the Palace of Westminster and the Elizabeth Tower, which houses Big Ben. However, it is more likely that the architect was Gideon Boyce of Tiverton and the building was completed by R D Gould of Barnstaple.

The Church of the Immaculate Conception functioned as the Roman Catholic place of worship for the people of Barnstaple and its surrounding area up to 1984, when a larger church, known as St Mary’s, was built alongside. St Mary’s remains an active church with Mass taking place during the week and on Sunday as well as regular Weddings, Baptisms, and Funerals. The Catholic Parish of the Immaculate Conception covers a large geographical area including the towns of Barnstaple and South Molton, many local villages, and parts of Exmoor. There are two churches in the parish – the Parish Church of St Mary, Immaculate Mother of God, in Barnstaple and the Church of St Joseph in South Molton. The Parish Priest is Canon Peter Morgan.

Do you know this building? Historic England invites you to share your knowledge and images of listed places, so it can record important facts, and even unlock the secrets of some. Contributors can add film clips if they have a YouTube account. Historic England would love for people to add in photos, information, memories, and film clips (YouTube account needed) which will be published on the list entry information for all to see. Find out how you can Enrich the List.