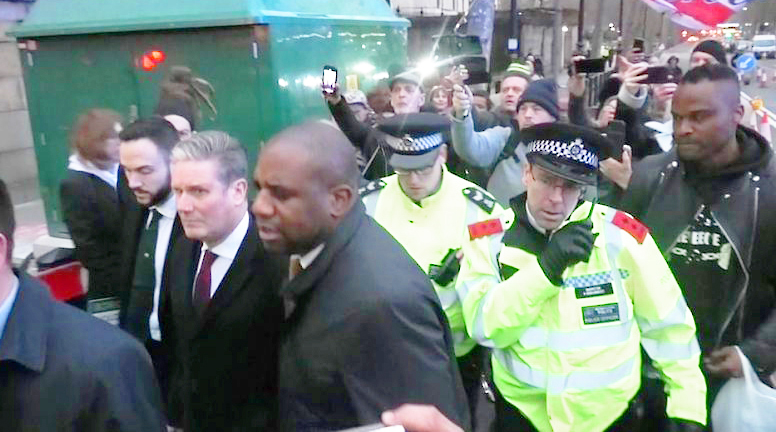 Regular readers of my commentaries will be aware that I’ve never had the best opinion of politicians. Some of our individual legislators have been outstanding in representing their constituents and broader social issues, but the general political system we have in this country is heavily flawed and increasingly falling apart. In recent years it has become all but irrelevant to the public mood, and as a consequence engagement and voter numbers have plummeted.

For generations UK politics has been a predominantly monochrome affair, with Labour and Conservatives battling it out in pursuit of their particular social and economic models. Voters too knew for certain where they stood, and it was a simple matter to predict voting habits and social attitudes, based on traditional and inherited class status and unchallenged social divisions.

Social and political historians tend to point to various key moments in public history to explain the seismic changes that have occurred in British life and politics – the First World War supposedly smashed the notion of aristocracy and labouring classes; pop music in the 1950s created the concept of the vocal teenager, and the sexual revolution of the 1960s rewrote traditional codes of morality.

When historians look back in search of subsequent landmarks, the emergence of the world wide web in the late 1980s will surely be seen as one of the greatest changes of our lifetime, perhaps even of history itself. The expectation was the democratisation of narratives and the ability for the entire planet to communicate on an equal platform regardless of established conventions, restrictions or confinements. Sadly, like so many projects conceived by idealists, the commercial and practical application of an idea becomes a lot less beneficent than its founding intentions.

The ugly confrontation that Labour Leader Kier Starmer endured this week is in many ways the inevitable outcome of the internet’s democratisation of narratives. Whatever one may feel about the value of legislators no decent human being should have suffer being accosted by a mob, especially when it’s being driven by misinformation. Of course violent confrontation on political issues is nothing new, in fact we have a long history of such protests in this country – you could even say our democracy has been built on them. But the Starmer incident points to something far more sinister – radical and potentially harmful action based on the dissemination of misinformation, in this case coming from the government itself.

We’ll probably never know what motivated Boris Johnson to utter the now notorious ‘Saville slur’, but few can deny that the scurrilous accusation gained rapid and terrifying traction and currency across social media, and led to Starmer being ambushed viciously as he left Westminster. Given the recent murder of David Amess, and other deadful attacks on politicians, including the internet-fuelled murder of Jo Cox in 2016, such incidents are just a whisper away from tragedy.

Whether we like it or not, we are now living in an age where comments have consequences. Just as Donald Trump discovered at his “Save America” rally last January, impassioned political rhetoric – once the staple of parliamentary discourse – is now being weaponised by invisible and uncontrollable forces within the digital universe.

Phrases like ‘trolling’,’ cyberbullying’ and ‘click baiting’ are now part of our common vocabulary, the new night time terrors we are having to learn to live with. By its very nature the internet is anonymous and unaccountable, which has led to what psychologists are now calling the “online disinhibition effect” – the abandonment of rationality and the other checking mechanisms on discourse that things like identification and eye contact that would otherwise prevent. (Eye contact in particular is proven to increase self-awareness, empathy and the awareness of other people’s reactions to what is being discussed, and of course named identification ensures some kind of accountability.)

Within our own Catholic community too, the emergence of increasingly irrational and uninformed discourses is becoming a very real and potentially damaging problem. No longer are conspiracy and other esoteric theories confined to the output of fringe publishers; they have moved centre stage into the great torrent of daily digital chatter. Sadly most of the current rumblings about schism, conspiracies, heresy and illegitimate laws are coming from within the Church itself. What might once have been dialogue has now become a bitter battle for souls and minds by certain self-appointed (but unaccountable) arbiters of truth and theology.

For the casual user of the internet and social media it has become quite impossible to discern where truth and reality lies, when all things are presented with equal value and veracity. The internet has usurped traditional media channels such as the printed press and broadcast media, but we may come to lament the loss of a mechanism where at least we knew who was saying what, and from what political or social perspective.

Over the next two years Catholics around the world will be engaging with the synodal process, and questions about the nature and value of Catholic media and our general means of communication are already floating to the top of many discussions. Hopefully there will encouragement to read the great encyclicals on ‘the means of social communication’ such as Pope Pius XII’s 1957 encyclical letter Miranda Prorsus, Pope Paul VI’s Inter Mirifica of 1963, or the Pastoral Instruction on the Means of Social Communication Communio et Progressio, published in 1971.

Across the pandemic the closure of our churches and other physical parish centres meant that our Catholic population was forced onto the internet to keep in touch and maintain the practice of their faith. Rocketing online Mass attendance figures have revealed that even those reluctant to engage with the torrent of social media were making new choices about how they receive Catholic information and instruction. We will always be a physical Church centred on the physical presence of Christ, but the internet is here to stay, and Catholics will need to factor in such mechanisms to our future thinking about the Church and how it evangelises. Yes, it’s a challenge, but it’s also a profound opportunity to place our faith in the marketplace, where it truly belongs.

Joseph Kelly is a Catholic writer and publisher, and is founder of www,thecatholicnetwork.co.uk

3 thoughts on “Keir Starmer mob incident is a warning to us all to use the internet for common good and not malice, says Joseph Kelly”