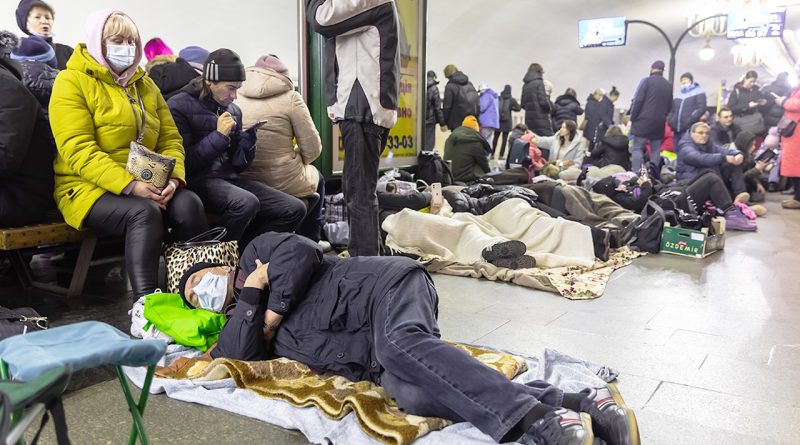 Today’s decision by the UK government to allow Ukrainians with an identity document to apply online for a visa to join family members in the UK is a welcome development. It was just a shame that the government had to be hauled into the House of Commons and take a battering from MPs of all parties before it made even this basic compromise.

Since the start of the Ukraine conflict our European neighbours have opened their borders and waived the need for visas to fleeing refugees – with Poland alone taking in 1.3 million so far. To its eternal shame Britain has remained a fortress island, showing exactly the same kind of indifference to Ukrainians that it showed to fleeing Jews during the darkest days of the Second World War.

Over the past fortnight more than two million people have fled Ukraine and so far the UK has issued just 957 visas. This is unforgivable when you consider that the UK government has known about the likelihood of a Russian invasion of Ukraine for months, yet there has not been the slightest preparation for helping the vulnerable victims of such a crisis.

We shouldn’t be too surprised by this, as the government has for years been fixated with prevention rather than welcome when it comes to people arriving at our borders. The pitiful accumulation and disownership of thousands of desperate people in camps along the French side of the English Channel in recent years is bitter testimony to the UK’s inability to trust strangers and defend our country like some prized gated community.

It has been ironic that all shades of UK government over the past two centuries have touted their liberal globalist credentials in public yet have legislated like fundamentalist nationalists. The argument has always centred around the notion that Britain is the most welcoming country on the planet, but simply can’t afford to accommodate too many people. It’s a convenient meme that has sought to placate the reality that we’ve always been doing a lot less than our neighbours to welcome in the stranger.

The roots of British reluctance to open our borders runs back deep into our island history, and has led to the development of an entirely fictitious sense of ‘British’ identity, as if this was something genetically and culturally distinct. In fact the UK population is probably one of the most genetically diverse in the world, with almost every citizen in the country being a ‘foreigner’ of some sort. Most UK citizens living today can trace their ancestry to other nations within just a few generations, which you would think would give us a latent inclination to welcome others to our island.

Sadly it doesn’t, which is largely down to the fact that the prosperity of the UK has historically been built on the economic disruption and exploitation of the global south, and latterly the very countries currently experiencing economic ruin and mass exoduses. The 1960s baby boom generation in particular has given rise to an entirely new degree of personal interest and competitive selfishness that its beneficiaries are determined to cling on to, whatever the cost to others. The decline of institutionalised religious belief and the slide into relativism that has also accelerated since the 60s and has further eroded well-tested notions of morality, neighbourliness and a common human family.

It’s not that we’ve become less caring but acts of humanity are no longer defined by a tried and tested code, rather by the prevailing attitudes of the day. This means that acts like love, charity and humanity are no longer defined concepts but rather fluid actions defined by the mood of the moment, and of the majority. In such an atmosphere, legislators will always be chasing the zeitgeist, and acting to appease the majority rather than necessarily making the right decisions.

In terms of immigration and refuges, there is unquestionably a right and a wrong thing to do. It’s not difficult – if your neighbour is cold, hungry and without shelter, you sort it out. If any legislator is more concerned that welcoming in refugees is going to tip the balance of nationalistic opinion, damage the economy and affect voter habits at the next General Election, they shouldn’t be in politics. There is no place in the modern age for imperialism, and one has even to ask whether or not the notion of a ‘nation-state’ itself is antagonistic to global human welfare. After all, the rise of the ‘nation state’ and the relentless efforts to homogenise populations within fixed territories is exactly what is leading to the present human catastrophe of warfare and migration.

The Catholic Church has always taught that all good things are made for the good of all, not the few. In a perfectly balanced world, such as that which God created, there is enough for everyone, and goods have a universal destination. This means that countries that have a surplus have a profound obligation to assist those in need, and this includes providing the basic requirements to sustain life – food, fuel and shelter. One only has to look at the economic issues surrounding the Ukraine conflict to see that possession and control over such basic goods lies at the heart of the failure of nations to live together peacefully. From the excesses of Russian oligarchs, to the control of gas, oil and grain, through to the vast fortunes being made by arms suppliers – this war (like all wars) is not really about ordinary people who want to live contented and productive lives, but about those minority of people who have accumulated outrageous excess and are absolutely determined to hold on to it.

In a word, Greed.

It’s no good the UK flying its flag as a commercially and socially successful country, if that prosperity has been bought on the exclusion of others. It’s also not worth insisting that we let in more refuges, if they are then going to be abandoned to the kind of selfishness and exclusion that recent government policies have encouraged. It’s simply no excuse to say that we can’t manage and support large numbers of new citizens – we can and we must, but they also need to come to a country that is not only a place of refuge, but of justice and shared prosperity, where greed and selfishness has no currency.

Joseph Kelly is a Catholic writer, and founder of www.thecatholicnetwork.co.uk