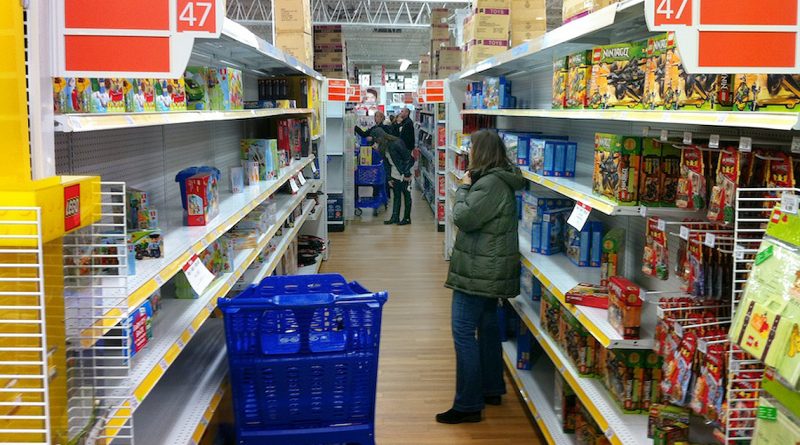 If we’re to believe the mainstream media, this coming Christmas is threatening to be something of a stressful washout for countless families across the UK. It would seem that the much-discussed lack of HGV drivers has clogged up our ports, and our docksides are now jam-packed with shipping containers full of apparently irresistible Christmas merchandise that we’ll probably never get to see in time.

We have already been warned about an absence of turkeys for our tables, and it now looks like white goods, toys, electronics and even some foodstuffs are unlikely to reach shops in time for the festive break. And we’re told that massive containers ships are now avoiding UK ports altogether as they can’t unload, and the supply chain problems are impacting even at source. Tragically, a million Elf on the Shelf toys haven’t even left China yet, and we’re all likely to miss out on flaunting the latest iPhone because of the global shortage of microchips.

Whilst some of this may be a calamity to those running particular businesses, it’s actually unlikely to cause too many meltdowns in the average family home. The past 18 months have been a uniquely awful moment in history for the vast majority of us, and – unless you’re one of the very lucky few with accumulated wealth – splashing out on frivolities this December is highly unlikely to be at the top of your Christmas list.

With the catastrophic impact of more than 150,000 Covid deaths, more than a million people facing employment uncertainty due to the end of furlough and the many redundancies that have already taken place, the world has surely changed. Old dinosaurs may harp on about forcing us all back into our offices and factories so they can replenish their bank accounts, but even the humblest of employees has learnt something now unquenchable about work and human dignity. Many of our legislators too must be wondering what has become of the old monochrome assurances and prejudices that used to divide the country so helpfully along partisan lines.

For sure it’s been a dreadful year, but I’m becoming increasingly optimistic that this pandemic has changed something fundamental in the human psyche. Despite all the hardships we’ve been through, or maybe because of them, there are real signs of a rejection of the selfishness and self-obsession that has overwhelmed society in recent decades. Weary heads are lifting their eyes from computer screens, desks and workbenches. Perhaps even the hands of God are reaching out to us?

And it may just be that this Christmas, many are hoping for something a little more meaningful than a frivolous and crippling shopping spree?

In the year running up to the pandemic there was a very concerted effort to expunge the Christian roots of Christmas, and replace it with an unashamedly secular celebration of elves, reindeer, santas and snowdomes.

During the Christmas immediately before the pandemic hit, I recall it was all but impossible to find a shop shelf with a religious Christmas card, let alone something as politically dangerous as a nativity scene or set of Wise Men.

Far removed from the profound simplicity of the Bethlehem story, our Christmases had become the time of year when either hard-earned fortunes were thrown away on things that nobody actually wanted nor cared for after they’d got them, or we became consumed with the hopeless quest of finding ‘the perfect gift’.

Few people seemed to understand any more that a gift is ‘subjective’, and the really precious gifts of Christmas are not even physical gifts at all. Time spent with family, time to listen to others, time to look around and discover who is our neighbour, time to share and help others, and time to stop and give thanks for the things we have got rather than the things we haven’t – these are the gifts we have lost; the things that the Christian message of Christmas used to remind us of each year.

Despite all the chaos and uncertainty surrounding our economic and personal recovery, we must have faith that some good things will emerge from this pandemic, and it could even be that society will learn to step back from the secular, consumerist celebration of Christmas to something far more faithful to its roots.

Earlier this month, Bishop Richard Moth, Bishop of Arundel and Brighton and Chair of the Bishops’ Conference Department of Social Justice, threw his support behind a community initiative called ‘Love Christmas’, where Local volunteers will deliver a million Christmas boxes, containing food and essentials, to those most in need as well as providing a vital moment of social interaction.

“It is both timely and much needed, given the adverse impact the Covid pandemic continues to have on many people in terms of health, finances, isolation, loneliness and mental health,” said Bishop Moth.

“Last year, 2,275 Christian churches took part in the ‘Love Christmas’ campaign and delivered 770,000 boxes to people across the nation. This year the goal is deliver one million boxes!,” he pledged.

Elsewhere around the country our Catholic Church has been working tirelessly throughout the pandemic to relieve the distress it has caused to those of our neighbours who are most vulnerable.

In the Archdiocese of Cardiff, for instance, their “Staying Together whilst Apart” series of initiatives included more than £130,000 in Food Vouchers distributed to needy families, together with the provision of food parcels, meal deliveries and digital support for those cut off from relatives and friends.

In Westminster, Catholic charity agency Caritas reported high levels of food insecurity and parish and school food relief projects during the pandemic have been working flat out to ensure no one goes hungry. Between April and June 2021 alone they distributed more than 50,000 meals and food parcels.

The same experience and response was reported from Catholic dioceses throughout the country.

As with any organisation or community, some things are done well, and others not so. Whatever our faults and shortcomings, an acute alertness and sensitivity to the needs of others has always been at the centre of our Church’s response to social challenges. It was a deep deprivation and challenge when all of our churches were forced to shut in the face of Covid, but parishes kept going, and most importantly kept their presence and commitment to service within their extended local communities. The initiatives were both heart-warming and, in many cases, commendably innovative.

As we approach Christmas it might seem a bit out of place to think of Jesus washing the feet of his disciples (John 13:15), but I’m reminded of Our Lord’s words: “I have set you an example that you should do as I have done for you.”

In truth there is nothing wiser we can do than lead by this example, and demonstrate the simple but profound Christian charity that lies at the root of our faith. And who knows, over the coming weeks it might even help a society exhausted with secularism to rediscover the real meaning of Christmas, and the Incarnation.