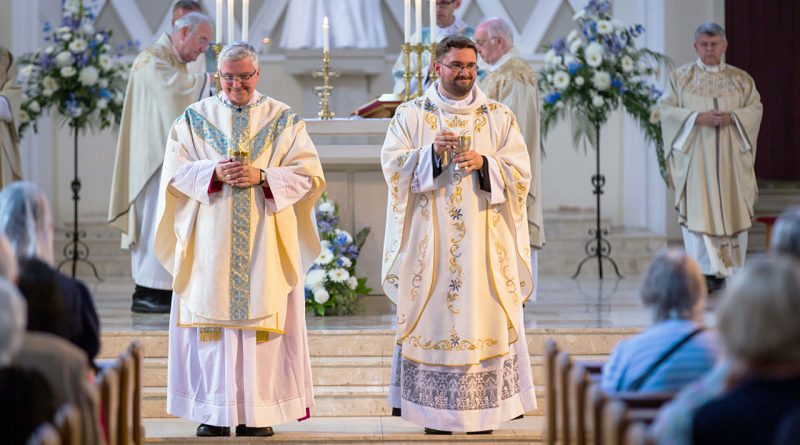 On Saturday (16 July), Archbishop Mark O’Toole ordained the Reverend Elliot Hanson for service as priest in the Archdiocese of Cardiff. Fr. Elliot is originally a native of Barry who came from an Evangelical background to the Catholic Church thanks to his time as a sixth form student at St David’s Catholic College, Cardiff and a little French town called Lourdes.

Lourdes is famous as being the place where Our Lady appeared on several occasions to St Bernadette in the 19th century. Our Lady would appear to the saint in a Grotto (cave) along the banks of the River Garve. It is a site of many miraculous healings, making Lourdes a centre of pilgrimage in the Catholic world with hundreds of thousands flocking to the town annually. Recalling his first experience of Lourdes, Fr Elliot said:

“I must admit I was highly sceptical during my first visit. I remember sitting at the back of Mass and thinking to myself ‘all this up, down and on your knees – it’s like an aerobics class!’ Despite that I began to ask questions: What do Catholics actually believe? and why do you believe it? Little by little, I realised I wanted what they had. I wanted to worship God to the fullest extent in the Church He founded.” (Fr Elliot Hanson)

So it was in 2010 that Fr Elliot’s faith journey saw him welcomed into the Catholic Church and his zeal for God’s greater glory grew stronger. As a student at the University of Southampton he took an active role in the Catholic Society (CathSoc) where he deepened his life of prayer and served the local community, and began to consider serving the Lord in a radical way. He returned to France, this time to spend a year in France living with priests, before responding to the Lord’s call and entering seminary in 2015.

Archbishop Mark opened his homily with the words:

“In the providence of God this Ordination takes place on the Feast of Our Lady of Mount Carmel.” (Archbishop Mark O’Toole)

For Fr. Elliot these words likely reminded him of his encounter with Our Lady in Lourdes, who stirred his heart to go deeper into the Catholic Faith. And it was fitting on a Feast of Our Lady, under the title of ‘Our Lady of Mount Carmel’ he should come to this Ordination and a further invitation to ‘go deeper’ once again as Archbishop Mark reminded our newly ordained priest as he reflected upon the great saints associated with Mount Carmel.

“Elliot, like all of us, you are invited to foster a very deep love for the Church. This means not some idealised Church but the one we experience here and now where we are. This includes a very real love for the Holy Father as the Successor of St Peter, and a love for our local Diocese. You have thrown your lot in with this local Church. It is here that the drama of your own salvation is to be played out. It is the locus of how you are to be an instrument of the Lord’s love.” (Archbishop Mark O’Toole)

In the autumn Fr. Elliot will take up his first placement as an Assistant Priest in All Saints, Newport. Ad multos annos and every blessing Fr. Elliot!