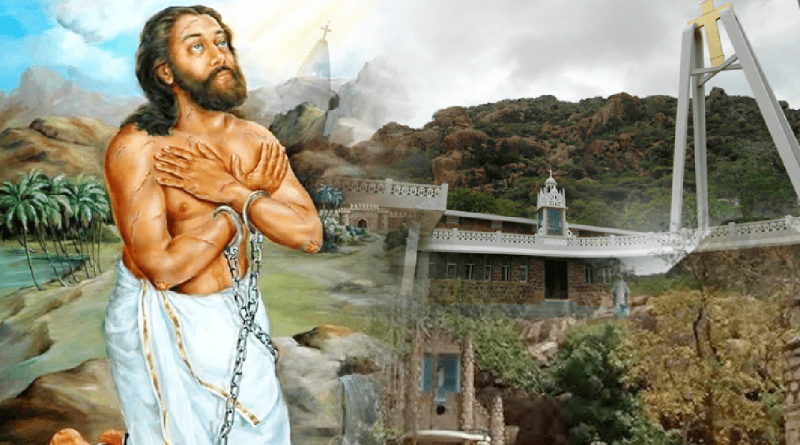 Bishop Thomas Neylon has expressed his joy at the news of the Canonisation of Blessed Lazarus, also called Devasahayam, an 18th-century Indian martyr. He was a married Hindu man who converted to Catholicism.

Taking the name ‘Lazarus’ or ‘Devasahayam’ in the local language, meaning ‘God is my help’, he was brought up on false charges of treason and espionage and was divested of his post in the royal administration. He was imprisoned and subjected to harsh persecution. A Catholic for only seven years, he was shot dead in the Aralvaimozhy forest on January 14, 1752.

The life of Devasahayam

Devasahayam was born on 23 April 1712, as Neelakanta Pillai into a Hindu upper-caste family, at Nattalam in Kanyakumari district, which was part of the erstwhile Travancore kingdom.

He was an official in the court of Travancore’s Maharaja Marthanda Varma. It was during his service in the court that he met Captain De Lannoy, a Dutch naval officer and was introduced to Christianity.

Inspired by the teachings of Jesus Christ, he was baptised in 1745 and assumed the name of ‘Lazarus’ or ‘Devasahayam’, meaning ‘God is my Help’.

History records that the Travancore Maharaja was furious about his conversion and shot him dead at Aralvaimozhy forest on 14 January 1752.

A Vatican note on him in February 2020 had read, “His conversion did not go well with the heads of his native religion. False charges of treason and espionage were brought against him and he was divested of his post in the royal administration.”

His mortal remains were interred near the altar inside St Xavier’s Church, Kottar, Nagercoil, which is now the diocesan Cathedral.

Devasahayam was recommended for the process of Beatification by the Vatican in 2004, at the request of the Kottar diocese, Tamil Nadu Bishops’ Council and the Conference of Catholic Bishops of India.

In 2014, a miracle attributed to Devasahayam was recognised by Pope Francis, paving the path to his sainthood.

Bishop Neylon, Lead Bishop for Asia for the Bishops’ Conference, has recorded a short audio reflection on the new saint and sees his relevance for Catholics today.

“Even though Blessed Lazarus lived over 200 years ago, his life has much to teach us today about how to share, how to receive, and how to live our faith in Jesus Christ. During his life, Blessed Lazarus experienced riches and a position of trust in the society in which he lived. He also experienced suffering, humiliation and poverty, because of his faith in Jesus Christ.”

One thought on “India’s first lay Catholic saint has much to teach us today, says Lead Bishop for Asia”