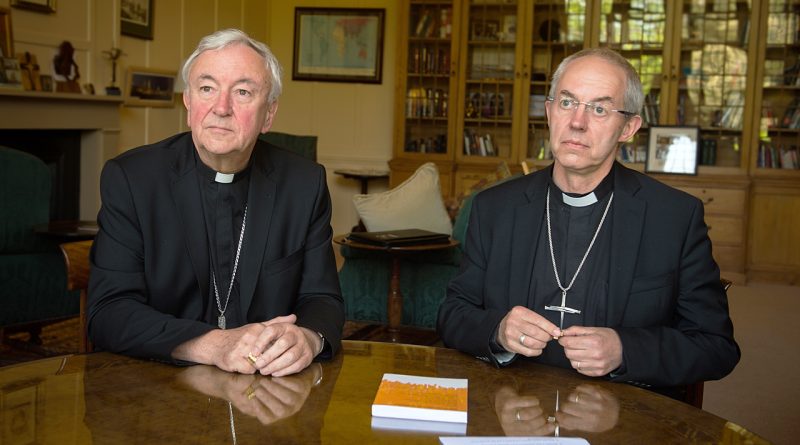 When Prime Minister Boris Johnson this week accused the Archbishop of Canterbury of having “misconstrued” the policy of sending asylum seekers to Rwanda, he clearly didn’t expect his remarks would provoke a reaction.

Nor did he expect that his subsequent quips at a private meeting of Conservative MPs would leak out, leading Labour leader Keir Starmer to accuse him publicly of: “slandering decent people in a private room, letting the slander spread, without the backbone to repeat it in public.”

The Archbishop had raised “serious ethical questions” about the policy in his Easter Sunday address and had said it cannot “stand the judgment of God”.

In the sermon, the archbishop added: “sub-contracting out our responsibilities, even to a country that seeks to do well, like Rwanda, is the opposite of the nature of God who himself took responsibility for our failures”.

“We know the huge challenges there are, internationally, in finding responses to this issue, responses that must match the desire to help with the limited resources on which there are so many calls,” the Cardinal said.

“We pray for those whose aim each day is just to survive. And we pray that those who seek solutions do so with compassion, and with regard for the dignity which is innate to every human being.

His comments were today echoed strongly by Bishop Paul McAleenan, the Lead Bishop for Migrants and Refugees for the Catholic Bishops’ Conference of England & Wales, who said: “Despite presenting the plan as a humanitarian need to combat trafficking, this scheme will compound the difficulties of those arriving on our shores hoping for a new beginning. The actions of the people of this country show that they wish to lift up those in need, decisions of the government should do likewise.”

The government’s annoyance that Church leaders have had the temerity to question this dubious plan is entirely predictable, but fundamentally misplaced.

In the first instance, Justin Welby is a member of the House of Lords and a Lord Spirtual. Ex ifficio, he is the Primate of All England and the symbolic head primus inter pares of the worldwide Anglican Communion, so he sits very prominently at the intersection of faith and politics. Like all other members of the upper house the Lords Spiritual can take part in all business of the House, including tabling and asking questions of Ministers, leading or speaking in debates and scrutinising legislation.

So his comments in his Easter Sunday message were not only permissible and appropriate, but profoundly accurate, as are those of his Catholic conferes.

The notion that desperate people fleeing war and persecution can be traded across the world like so many human commodities is an abhorrence that should rightly shame any decent human being, and is a fundamentally important issue for our faith leaders to comment on.

Quite how the government thought this policy would gain traction and acceptance in the current public environment is a mystery, but we do have law-breaking Prime Minister heading a dogged loyal Cabinet who all seem determined to ‘tough out’ even the most damaging public criticisms.

We’re told that many Conservative MPs were apprehensive about the Rwanda Asylum Plan, but Home Secretary Priti Patel used her personal mandate to push the policy through; that of itself indicates a government deeply divided, but run by autocrats who are fully prepared to ignore their own best advisers.

Writing in The Times this week, Patel also hit back at her critics, and sought to put the government on the moral high ground by arguing that: “We are taking bold and innovative steps and it’s surprising that those institutions that criticise the plans fail to offer their own solutions.”

“Allowing this suffering to continue is no longer an option for any humanitarian nation.”

What’s particularly disturbing about this, and the Prime Minister’s attack on the Archbishop of Canterbury, is the increasing efforts by a failing and discredited government to create contra-narratives to public opinion, even when those arguments defy logic and moral legitimacy.

History has long taught us that repeating false narratives and cancelling scrutiny are the first steps towards a totalitarian state.

(Listening to all this I couldn’t help thinking of George Orwell’s dystopian novel 1984, where Winston Smith sits down at his desk in the Records Department of The Ministry of Truth every day to studiously re-write the historical record!)

In my own 40 years in journalism I never expected to read the headline I saw this week that said: “PM – I broke the law but I’m not going”, but clearly we are now living in a new world where old, cherished values are being trampled over on a daily basis.

What caused particular upset in faith circles this week was the prime minister’s comment that over the Rwanda scheme “senior members of the clergy” had “misconstrued the policy” and had been “less vociferous” in their condemnation on Easter Sunday of Mr Putin than they were of the migration policy.

This was entirely incorrect as both Justin Welby and Vincent Nichols had condemned Putin’s war in Ukraine. Mr Welby did not mention Mr Putin by name, but he did call for a “Russian ceasefire, withdrawal and a commitment to talks” and Cardinal Nichols has also called on the international community to seek an end to the conflict through peaceful means “as the only way forward”.

“It is their responsibility to ensure that international law and territorial sovereignty are respected,” the Cardinal said.

Of course this is by no means the first time that a ruthless Conservative government has been hauled to account by leaders of our faith communities.

When the Church of England published its controversial Faith in the City back report in 1985, The then Archbishop of Canterbury, Dr Robert Runcie, took the full brunt of Prime Minister Margaret Thatcher’s infamous anger. Faith in the City drew highly unwelcome attention to the government’s abject failure to address urban poverty and marginalisation, and was highly critical of Mrs Thatcher’s view that the wealth of the very richest would somehow naturally trickle down to benefit the poorest. The Church of England report exposed the truth that the wealthiest were just getting wealthier and determinedly holding on to their cash, whilst the poor were getting ever more desperate.

Those who remember those dark days will recognise clear parallels between the Johnson strategy and the efforts of the Thatcher government to dismiss the Runcie concerns as just the fanciful work of a bunch of crazed Marxists. What no-one noted at the time was that the diminutive, homely Dr Runcie had once been a tank commander in the Scots Guards who’d won the Military Cross for rescuing a burning colleague from a tank. Throughout his tenure he continued to haul the government to account tenaciously on a wide range of issues where its moral compass was spinning out of control. You could almost cut the ice on the Thames as the two leaders faced each other off across the dirty river.

But it’s not just the Tories who’ve sought to silence the voices of faith and morality in British politics. Back in January 2003 another Home Secretary, David Blunkett, made an unprecedented direct attack on the newly installed Archbishop of Canterbury, Dr Rowan Williams.

In his first speech since taking up his new post, Dr Williams had the temerity to say that modern politics was about satisfying consumer demand and moral issues were ignored – which really hit home with a Labour government. In response Mr Blunkett called Dr Williams a “fellow hairy lefty” and said much of his analysis in his high profile Dimbleby lecture about politics was a “travesty”.

Like his predecessor Dr Runcie, Dr Williams continued to hold the government to account over its policies, including infuriating Blunkett on the government’s poor treatment of political prisoners, and heavily criticising the then much-lauded Tony Blair over his decisions leading up to the Iraq war.

For our own Catholic hierarchy the picture of advice and admonition has had to be somewhat more nuanced. We don’t have the platform of membership of the House of Lords – though more than one recent cardinal has been invited. Of historical necessity the Catholic voice has remained outside the influence of the government and political institutions of the day, and this is probably for the best.

However, we do have may Catholic MPs and peers who devote themselves to presenting Catholic concerns in both houses, and our hierarchy have a long and illustrious history of high profile political interventions – Manning and the great London dock strike of 1889, Cardinal Bourne’s major part in the passing of the Roman Catholic Relief Act 1926, up to the more recent support of Cardinal Hume for ‘the Birmingham Six’ and ‘The Guildford Four’, and Cardinal Nichols’ 2020 calls for the government not to cut its foreign aid budget, his work with the government on the post-pandemic reopening of churches, and his demand earlier this year that the government allow Ukrainian refugees “to enter the UK as quickly as possible.”

Looking back to the Roman Catholic Relief Act of 1926, it’s worth remembering that this Act marked the removal of the final legal disabilities of Catholics in England, which meant that we were no longer treated as inferior to other people living in England. Cardinal Bourne’s heroic efforts to secure this final liberty for our Catholic community were fraught with challenges, and he admitted himself that getting the Act through parliament was a ‘close call’.

Today’s political leaders might lament the Catholic Church in England & Wales being given its voice alongside their own Lords Spiritual, but never in recent times has the voice of all our spiritual leaders been needed more urgently.