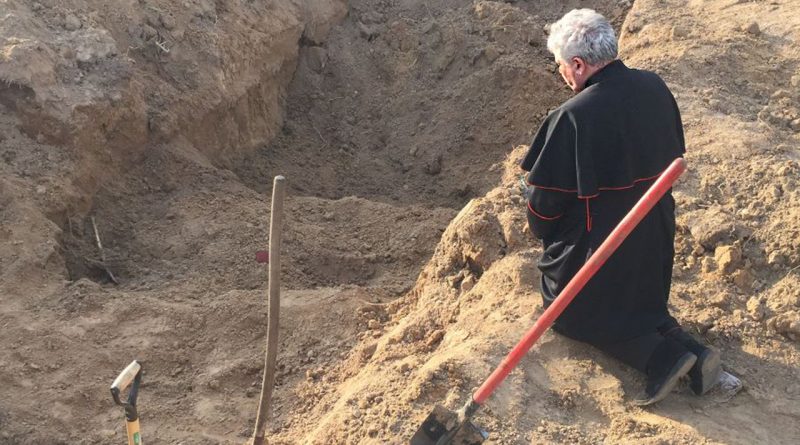 A papal envoy prayed beside a mass grave in Ukraine on Good Friday.

Cardinal Konrad Krajewski was pictured praying on 15th April at a grave containing 80 bodies during a visit to a newly liberated area of northern Ukraine.

The Holy See press office said that the papal almoner traveled to Borodianka, a town around 30 miles northwest of the capital Kyiv.

The cardinal said in an audio message shared by the press office: “Here with the nuncio, we are returning now to Kyiv, from these difficult places for every person in the world, where we still found so many dead and a grave of at least 80 people, buried without first name and surname. And the tears are missing, the words are missing.”

“Thank goodness that there is faith, and that we are in Holy Week, Good Friday, when we can unite with the person of Jesus and ascend with Him on the Cross, because after Good Friday … I know, I know: there will be Resurrection Sunday.”

“And maybe He will explain everything to us with His love and change everything inside of us as well, this bitterness and this suffering that we have been carrying for some days, but particularly since today.”

Krajewski, who has overseen the Office of Papal Charities since 2013, has made two previous visits to Ukraine at Pope Francis’ behest.

During the first, he met with the country’s Catholic leaders and on the second, he delivered an ambulance to the authorities in western Ukraine.

During his third visit, the 58-year-old Polish cardinal delivered a second ambulance donated by Pope Francis to a cardiological hospital in Kyiv.

A week before Krajewski’s visit to Borodianka, Major Archbishop Sviatoslav Shevchuk, the head of the Ukrainian Greek Catholic Church, prayed beside a mass grave in the recently liberated city of Bucha.

Days earlier, Pope Francis had held up a Ukrainian flag at a general audience that he said was brought from “the martyred city” of Bucha.

“Recent news about the war in Ukraine, instead of bringing relief and hope, attest to new atrocities, such as the Bucha massacre, increasingly horrific cruelties carried out even against unarmed civilians, women and children,” the pope said.

“They are victims whose innocent blood cries out to heaven and implores an end to this war. Let us silence the weapons, let us stop sowing death and destruction.”