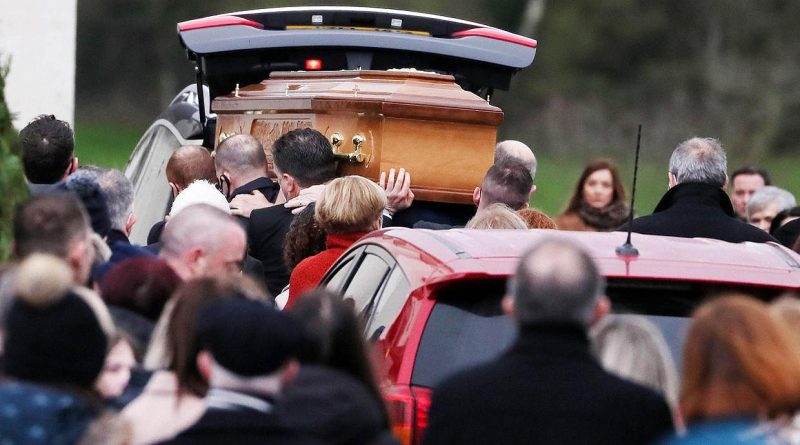 Francis Lagan was laid to rest today in his native Derry, Northern Ireland after he was killed in a tragic accident during Storm Arwen on Friday, 26th November.

The 40-year-old husband and father of four was the much-loved principal at St. Mary’s Primary School in Glenview, as well as a coach with Watty Graham’s GAA club in Co Derry.

On Friday during Storm Arwen, Lagan was killed when a tree struck his car as he was driving on the Dublin Road in Co Antrim. His wife and two of his children are understood to have been in the car as well.

Gormely Memorials additionally shared a tribute offered by St. Mary’s, Glenview in Co Derry where Mr Lagan was principal: “The Governors, pupils, and staff of St. Mary’s Glenview are shocked and deeply saddened by the sudden, tragic death of our much-loved Principal, Mr. Lagan. His kindness, dedication, and commitment to staff and pupils will be sorely missed.

“Our heartfelt sympathies are with his wife Louise, children Rose, Alice, Beth and Frank, his father Brian, sisters Roisin, Maura, Anne and Brenda and the wider family circle.”

Lagan’s funeral was held at St. Patrick’s Church in Maghera, Co Derry and interment followed afterward in the adjoining cemetery.

The couple first met at St Mary’s University, Twickenham where Mr Lagan was on a teacher training course.

“We often reminisced and spoke of happiest days. Francis’ happiest days were his wedding day in Rome in July 2010, and the days that marked the birth of our beautiful children: Rose, 8, Alice, 6, Beth, 4, and Frank, 3,” said his wife Louise.

“These four children sitting in front of me are undoubtedly Francis’ greatest achievements. I will continue to instill his values – faith, family, hard work, education, community, and good manners. We will honor his memory.

“Francis is gone in body. His legacy is strong and vibrant.”

She added: “They say that a man is not dead while his name is still spoken. Francie the legend will live on. May my gentle, beautiful husband, my best friend who blessed and graced my life rest peacefully in the kingdom of heaven.”

Their Parish priest Fr Paddy Doherty spoke fondly on Mr Lagan, saying: “He took time to welcome people with a smile” and that “he did make a difference, in our lives, in the lives of our community, and beyond.”

The priest added: “Francis, as we affectionately knew him as ‘Cutie,’ made friends easily and his influence spread far. He made a lasting impression on those who knew him, and his close friends spoke of him as fun-loving, witty, and he was a chief organizer of their social events, a people magnet, willing and obliging.”

At Tuesday’s service, a guard of honor was formed by members of the Watty Graham An Gleann GAA Club where Lagan coached. The club remembers him as a “great club man, coach, principal, colleague, mentor, friend.”

“I want to express my deepest sympathy to the family and friends of Francis Lagan following his tragic death. I was privileged to visit his wonderful school.

“He was a dedicated & passionate Principal and will be greatly missed,” said McIlveen.

St Mary’s University will celebrate Mass in memory of Francis on Monday 6th December at 1.05pm in the University Chapel and anyone who knew him will be welcome to attend.