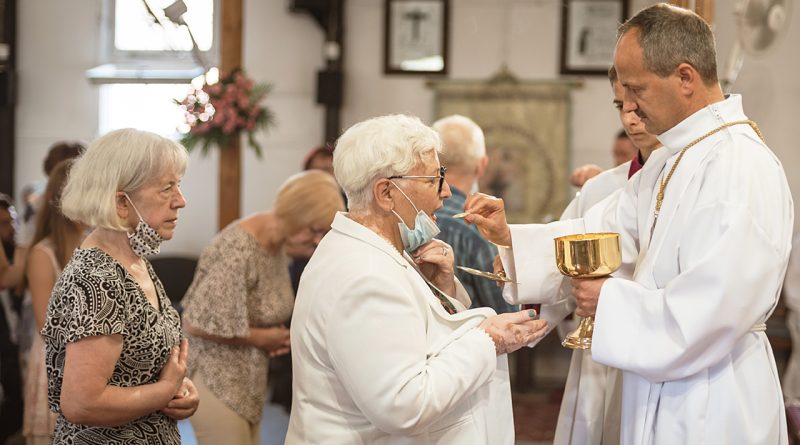 It seems hard to believe that it was more than two years ago now that all our Catholic Churches closed due to the dangers of the Covid pandemic. Although they remained exempt from the government’s ‘stay at home’ lockdown directive, with services suspended but still open for “solitary prayer”, the Catholic Bishops’ Conference of England & Wales (CBCEW) went beyond the guidance and made the incredibly difficult decision to close all churches to the public. The Catholic bishops of Scotland followed suit on the same day.

HE Cardinal Vincent Nichols said the decision came from a desire to be “good citizens”.

At the time it was felt that keeping our churches open sent an inconsistent message in the face of the government instruction to ‘stay at home’, and that encouraging Catholics to go out to church would likely mean that many people vulnerable to infection could be put at serious risk.

Being separated from our churches was a profound and difficult sacrifice and was certainly something that few Catholics had any experience of. It’s always said that you don’t realise how much you miss something until it’s gone, and for many the sudden loss of Sunday worship, however routine and unconsidered it may have become, was a huge and un-nerving shock.

Of course, the many of us transferred to online celebrations of the Mass and in the process we discovered other ways of maintaining connections with our faith, with others, and even made new and exciting connections to Catholic individuals and organisations that will continue to develop long into the future.

The full obligation to attend Sunday Mass returns at Pentecost (Sunday 5th June), but most Catholics have already been back at Mass for some time now. For a small number of others, especially the most vulnerable and elderly, Covid has not gone away so there is still an understandable nervousness about returning to Sunday Mass.

In a Resolution on Mass obligations released after the bishops’ Spring Plenary Meeting, our bishops made it clear that: “We understand there will still be some members of our congregations who, for reasons of health, do not feel safe enough to return to Mass. It has always been the understanding of the Church that when the freedom of any Catholic to attend Mass in person is impeded for a serious reason, because of situations such as ill health, care for the sick or legitimate fear, this is not a breach of the Sunday Obligation.”

In my own parish we’ve seen a substantial return of parishioners already in recent months. Initially a few brave souls negotiated booking a seat, using face masks and the hand sanitiser but as restrictions have eased, the numbers have increased, perhaps an occasional appearance at first but now every Sunday and the celebration has started to look a lot like it used to before the pandemic struck.

For me personally the pandemic brought to a close a particular 30-year chapter in my life in Catholic journalism, but it has also created the opportunity for me to write far more freely and widely on Catholic concerns. As the Catholic newspaper I worked for sadly closed, I suddenly found that without the lengthy daily commute and the restrictions of a distant office, I’ve been able to start building an entirely new and closer relationship with my faith, not least because I can now attend Mass at my own parish church far more regularly. And for the first time since childhood I’ve also begun to participate in weekday Masses when able, which has been completely transforming and uplifting.

Throughout this month our parish is reciting the Rosary before the Tuesday and Wednesday morning Masses, and this has been for me a profound return to my roots. I’ve always carried a Rosary with me, a visually unspectacular set but one I cherish because it belonged to my late grandmother, and probably to another before her. To those familiar with Irish rosaries, mine is one of those late 19th century cattle bone and amber Lucite ones that were churned out in huge numbers from the Mitchell Rosary Factory in Dublin, before the Corporation closed down the factory on account of the appalling smell of boiling of cattle bones that drifted daily across the city.

As a young child, and the nearest Catholic lad to the church, it often fell to me to serve at the early morning weekday Masses. It was a tough call, especially on dark, cold winter mornings to get out and up to the church for 7.30am, and sit in a freezing church with just three or four elderly parishioners, including one gentleman who always brought along his Yorkshire terrier! Fr O’Ryan, our parish priest, had survived a Japanese prisoner of war camp so a snowbound north Hampshire church on a dark winter’s morning was no impediment to his faith. I once had the temerity to ask him why we persisted in celebrating early morning Mass when so few people were about, and he simply quoted Matthew 18:20: “For where two or three are gathered in my name, there am I among them.”

As I attended what is now my local parish church in North Wales this week for the Rosary and morning Mass, I was very much reminded of the words of St Matthew, and of Fr Ryan. It also brought a rush of childhood memories serving the weekday Masses. Working my way along the small row of heavily time-worn, cow horn beads of my grandmother’s rosary I was also reminded of the many generations of my family who faithfully practiced their Catholic faith through difficult and dangerous times.

Unlike the happy tumult and socialisation of our Sunday obligation, there’s undoubtedly something profound and complimentary about attending a weekday Mass. In the silence and contemplation you come closest to the Incarnation, and spending such time with Our Blessed Lord really does give you the strength to face the challenges of the day. It also links you to the countless other Catholics around the world who will be doing exactly the same. As it says in the Third Eucharistic prayer: “…You never cease to gather a people to yourself, so that from the rising of the sun to its setting, a perfect sacrifice may be offered to Your name.”

As we return to the full Mass obligation this Pentecost, if you aren’t already a weekday Mass goer, do try to make time to attend if you can. It’s a powerful and inspiring addition to the great celebration of the Sabbath.