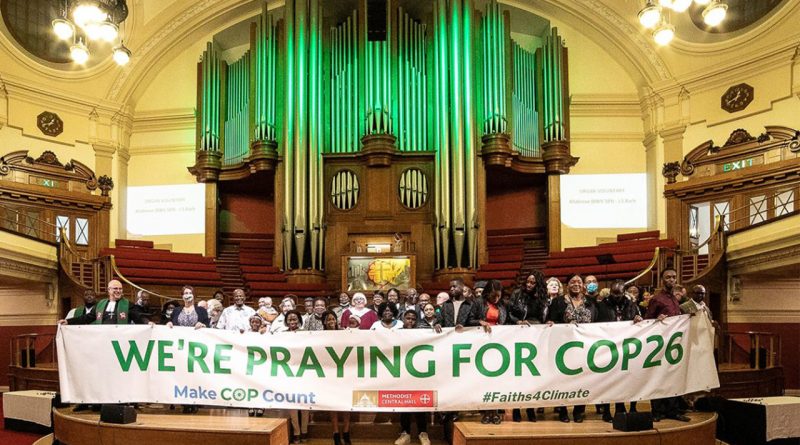 Today, five days before the UN climate conference, COP26, in Glasgow and four days before the G20 Summit in Rome, 72 faith institutions, including 37 from the UK, announce their divestment from fossil fuels in the largest-ever joint divestment announcement by religious organisations.

The global divestment announcement comes from faith institutions with more than $4.2 billion of combined assets under management in Australia, Ireland, Italy, Kenya, Nepal, Peru, Ukraine, the UK, the United States and Zambia.

Participating institutions include the Catholic Bishops’ Conference of Scotland; all Catholic dioceses in Scotland and four Catholic dioceses in England and Wales, including the Archdioceses of Glasgow, St Andrews & Edinburgh, Birmingham and Southwark and the Dioceses of Brentwood and Portsmouth; five Catholic religious orders including the Religious of the Assumption in England and Columban Missionaries in Britain; St Mary’s University, Twickenham; and the Church of England Dioceses of Truro and Sodor & Man. The UK Churches and dioceses involved in this announcement represent nearly 2,000 local churches.

Archbishop Bernard Longley, Archbishop of Birmingham, said: ‘Our commitment to divestment in fossil fuels is a response both to the cry of the earth and of the poor, taking us one step further towards its consolation. We join many other faith organisations who are making the ethical choice to ‘take care not to support companies that harm human or social ecology… or environmental ecology’, as Pope Francis calls us to do in the Vatican’s manual Journeying Towards Care For Our Common Home. To see so many united in this aim gives me great hope for the future.’

Our commitment to divestment in fossil fuels is a response both to the cry of the earth and of the poor, taking us one step further towards its consolation. Archbishop Bernard Longley

Bishop Philip Egan, Bishop of Portsmouth Diocese, said: ‘This decision, which has my full support, was taken by Diocesan Trustees recently, and reflects the commitment from both clergy and laity throughout Portsmouth Diocese… to play our part in the search for a more equitable use of our mother earth’s resources… to ‘live simply’ and in solidarity with the poor. I am delighted that we are joining with many other faith organisations to raise our voices prior to COP26 to bring attention to the urgent need for change in how we use our global resources.’

Bishop Bill Nolan, Bishop of Galloway and Lead Bishop on the Environment for the Catholic Bishops’ Conference of Scotland, said: ‘The bishops decided that disinvestment would show that the status quo is not acceptable and further, that given the harm that the production and consumption of fossil fuels is causing to the environment and to populations in low income countries, it was not right to profit from investment in these companies. Disinvestment is a sign that justice demands that we must move away from fossil fuels.’

The announcement follows the recent call from Pope Francis and other faith leaders to global governments to address the ‘unprecedented ecological crisis’ ahead of COP26 and calls from an international alliance of grassroots multi-faith activists who have called for an immediate end to all fossil fuel finance. Today’s announcement shows an increasing number of Catholic institutions are responding to the recent Vatican recommendation to divest from fossil fuel companies and invest in climate solutions.

The fossil fuel divestment movement has grown exponentially in recent years. According to a new report published today, more than 1,485 institutions with combined assets of over $39 trillion have made some form of divestment commitment, up from a starting point of $50 billion in 2014. Faith institutions have been at the forefront of the global divestment movement, representing more than 35% of total commitments. Rio de Janeiro, Glasgow, Paris, Seattle, Auckland are also announcing their divestment commitments today, joining the C40 Divest / Invest Forum supporting the advancement of divestment of their city and pension funds.

The International Energy Agency (IEA) stated in its recent Net Zero by 2050 Roadmap that there can be no new coal, oil and gas developments if the world is to limit global warming to below 1.5°C and prevent catastrophic climate impacts. As world leaders prepare to meet at COP26, the UK Government is coming under increasing pressure over plans for the Cambo oil field off the coast of Scotland, supported by oil giant Shell, which would release emissions equivalent to the annual carbon pollution from 18 coal-fired power stations.

Last month, more than 20 Southern African Anglican bishops including the Archbishop of Cape Town, the three bishops of Mozambique and the Bishop of Namibia called for an immediate halt to gas and oil exploration in Africa. They said that ‘a new era of economic colonialism by fossil fuel companies is well underway’ and that ‘Africa’s natural habitats are being destroyed at an alarming rate through the extraction of oil and gas’.

James Buchanan, Bright Now Campaign Manager at Operation Noah, said: ‘As the UK prepares to host COP26, we are delighted that 37 UK faith institutions have decided to divest from fossil fuel companies and join this record global divestment announcement. We call on the UK and global governments to end fossil fuel subsidies and bring an immediate halt to new oil and gas exploration, including the Cambo oil field.’

A full list of the 72 institutions divesting from fossil fuels and quotes from leaders can be found here.