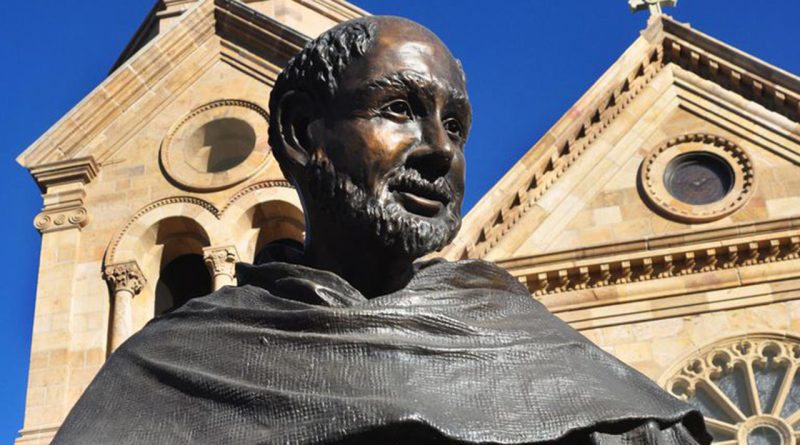 I want to tell you one of the most remarkable stories that you will hear.  The story contains within it a secret which, can change your life permanently for the better. It all began almost eight hundred years ago in Italy on a mountain top in Tuscany. The person who is the subject of my story is a very great saint,  St Francis of Assisi whose feast day is on October 4th. But the story that I want to tell you about is also commemorated with a feast day because on the 17th of September we celebrated the day on which he received both a very special gift from God, the stigmata, and also a revelation.

The Prayer of St Francis

But first, let me tell you about the extraordinary events that took place in the September of 1224 almost eight hundred years ago. The mountain was called  La Verna, and it was given to St Francis by Count Orlando dei Cattani as a place of retreat ten years before. On the morning of the fourteenth of September, the feast of the Holy Cross, St Francis was praying with his arms outstretched in the form of a cross immediately after Mass and before sunrise. It was to be an eventful day, the most eventful day in the whole of his life. He began to pray for the two things that he believed would enable him to attain perfect identity with the one he called Brother Jesus before he died.

Firstly, he prayed that he would be given the privilege to experience the suffering that Christ endured on the Cross. Secondly, that he would be given the privilege of experiencing the love that drove him to give his all for others. As he was praying he felt a flame of love burning within him with ever-increasing intensity. Then he looked up to see an angel that he was given to understand was a ‘Seraph’. Although it had six wings, two above its head, two to cover its body, and two with which to fly, it had a human body, the body of a crucified man. As he gazed upon the vision with fear and trembling he was simultaneously filled with joy.

When the vision finally disappeared he experienced Christ’s love as never before, while at the same time his body was transformed into the likeness of the crucified man before him who was enfolded by the wings of the ‘Seraph.’ The sources are all in agreement that he was left not just with wounds, but with nails in those wounds. The heads of the nails were in his palms and on the top of his feet, while the sharp ends curled round underneath in such a way that it was possible to put a finger through the ring that they made. He was unable to walk until St Clare made a special pair of shoes for him.

There have been other Saints who have received the stigmata after St Francis, some invisibly like St Catherine of Siena, some visibly like St Padre Pio, but none of them experienced the pain of the nails in the wounds. This was no psychosomatic phenomena. It was the real thing never experienced before or after St Francis in quite the same way. Although he tried to hide his wounds from his brothers, the blood was such that it soaked his clothing, particularly the blood from the wound in his side.

The Joy of Suffering for Christ

Despite this Francis was in a continual state of joy which he expressed in a hymn that he composed praising the God who had granted him all for which he had prayed. In contrast, his closest friend and follower, Brother Leo, was depressed and dejected. Shortly before Francis received the stigmata, he rebuked Leo for ‘spying’ on him whilst he was at prayer in the middle of the night. It was something of a misunderstanding and Leo had been forgiven, but the memory of the rebuke came back to haunt Leo when, after receiving the stigmata, Francis seemed distant. The truth of the matter was that Francis had been swept up into a sublime spiritual stratosphere, where he became all but oblivious of his brethren for a time, including Brother Leo. There was nothing personal, it was just that he had become so absorbed in the supernatural love that enveloped him, that it had made him neglect his dear friend.

Once he was told about it, Francis called Leo to him and reassured and consoled him by writing a special blessing just for him on the other side of the hymn of praise that he had just composed. Then he signed it with his own special signature that took the form of a Tau. The Tau looked like a stylised cross in the form of the letter T, and it was usually coloured red in remembrance of the blood that Christ shed on his real cross. Innocent III used it as a badge of the reform that he wanted to introduce into the Church and as a sign that the bearer had been designated as an instrument of that reform.

That is why Francis used to paint it upon his door and his walls and signed his letters with it, and now it was used to sign his special gift to console Brother Leo. It is still used by many Franciscans to this day as a sign of their calling. It changed Brother Leo’s darkness into light and he carried it with him at all times next to his heart until his dying day.

In a State of Continual Ecstasy

Francis travelled all the way back to Assisi on a donkey for he could not walk. Nor could he see or hear much, because he was filled with such sublime joy that most of the time he was lost in ecstasy. But on his return, he was filled with a new lease of life that enabled him to set off on brief missionary journeys in the surrounding countryside. It was the last flare of a flame that was about to peter out. Soon the first part of his prayer was about to be answered, as serious sickness enabled him to experience something of the sufferings that Brother Jesus had to endure on the cross. In order that we do not misunderstand the meaning of the sufferings for which he prayed, it is important to understand the secret revelation that Francis received from Christ moments before he received the stigmata.

It was at this moment that Francis received a revelation that would determine the very essence of Franciscan Spirituality and the profound theology that it would inspire. The revelation was simply this. He was given to understand that although he had prayed to experience something of the sufferings that Jesus had experienced on the cross, believing this to be the way to union with him, it was in fact not by suffering, but by the inner flame of God’s love that he would be transformed into Brother Jesus. The very moment that the vision faded he began to feel that flame within him, whilst at the same time he began to notice the marks of the crucifixion looming large on his poor emaciated body. The sublime union that was now taking place, however, was not caused by the wounds that he could see as they became ever more visible, but by the invisible flame of love within that consumed him.

A New Spirituality was Born

For those who could see, this revelation represented a shaft of light that pierced the thick pall of gloom that hung over medieval spirituality, giving hope where all seemed hopeless before. A new spirituality was born with a new theology to explain its profound implications. It was Francis who inspired this new spirituality that proclaimed the Primacy of Love and it was Blessed John Duns Scotus, who made it the starting point for the most profound and spiritual theology of love ever written. Initially, Francis wanted to hide this latest gift from God, as was his custom until Brother Illuminato intervened. He said that such gifts were not just given for the receiver, but for others too so that they could be inspired by the way God’s love works in weakness. He could hardly keep the stigmata a secret, so Francis told his close companions what had happened to him and through them to posterity.

However, there were certain secrets that were revealed to him that he kept secret and resolved never to divulge to anyone this side of the grave. If you ever go to La Verna you can visit the little chapel built over the very spot where  St Francis received the stigmata.  Here too is the cell where St Bonaventure wrote the story of what happened on that fateful day, and where he wrote his mystical masterpiece the Itinerarium Mentis in Deum.  But let me end by underlining the secret that I mentioned at the beginning, because it can, as promised, change your life, and change it permanently for the better.

From the beginning, authentic Catholic spirituality has been besieged and even overrun at times with alien pagan philosophical ‘spiritualities’ that insisted that the body is evil or the prison of the soul that must therefore be subjugated by harsh and harmful forms of asceticism that you find nowhere in the Gospels. This is the suffering they chose to bear through self-imposed asceticism, that they believed would lead them to union with God.

The Gospel says otherwise. God is love and it is only by love that we can be united with him. It is not our love, but the love of God sent on the first Pentecost day and on every day to those who are open to receive it.  The first Christians were taught how to come to know and love God, by loving his love-made-flesh and blood in the person of Jesus Christ our Lord through daily meditation.

As they learnt to love him, in the very act of loving him, that love acts as a sort of spiritual superhighway that enables our love to rise to him and his love to descend into us. In this way divine and human love meets and then mixes and merges into one another, enabling us to be united with the God for whom we have yearned for as long as we can remember. This is the way to God, the way to true happiness, and the way, to experience even in this life, something of the eternal happiness that God has prepared for us in the next.

David Torkington is the author of Wisdom from the Christian Mystics and Wisdom from Franciscan Italy.