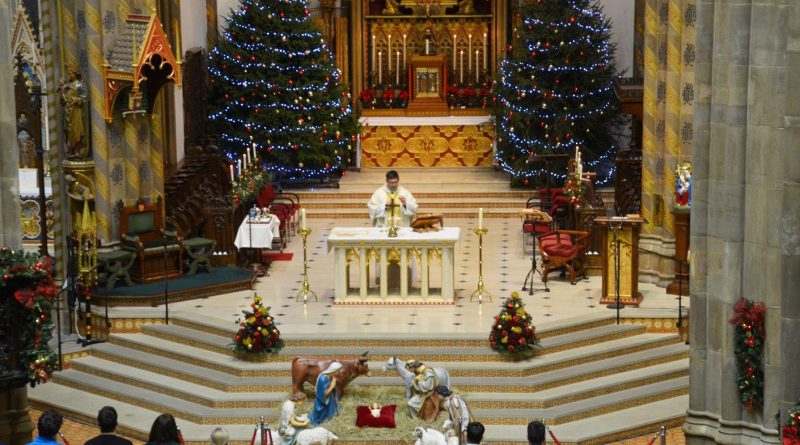 The first Mass of Christmas to be televised on the BBC this year will be broadcast from St Chad’s Cathedral, the Diocesan Mother Church of the Archdiocese of Birmingham.

Midnight Mass will be shown on BBC One with coverage starting at 11.45pm on Christmas Eve.

The BBC has recently announced its Christmas Religious Programming across television and radio.

It says of Midnight Mass: “Celebrate the traditional first Mass of Christmas with a joyful service live from St Chad’s Cathedral in the heart of Birmingham. The Dean of St Chad’s, Monsignor Timothy Menezes, will welcome us with a message of hope, and the prayers will be led by young people from the congregation.

“The celebrant and preacher will be the Archbishop of Birmingham, the Most Revd Bernard Longley. Music will include the well-loved carols ‘O Come, All Ye Faithful’, ‘Silent Night’ and ‘Hark! The Herald Angels Sing.’ Music Director David Saint will lead the cathedral choir in compositions spanning 500 years, from the Christmas motet Tui sunt caeli by 16th composer Orlando Lassus, to Richard Causton’s haunting 21st century Cradle Song.”

This is the second time in recent years the BBC has filmed Midnight Mass at St Chad’s, having last broadcast it in 2016.

Mgr Timothy Menezes, Cathedral Dean, said he was delighted the BBC were returning once again.

“This is a wonderful opportunity to celebrate the first Mass of Christmas in the company of a television audience. This will be a very special occasion for the cathedral and the Archdiocese of Birmingham.

“The cathedral team are working hard on a very special festive programme and it will be a highlight of the season.

“For all those people who are unable to get to Mass in person this Christmas you are warmly invited to join us via your television.”

Due to Covid restrictions there is no admission to this Mass and people are asked to join via the BBC broadcast.

One thought on “First Mass of Christmas to be televised by BBC will come from St Chad’s Cathedral, Birmingham”