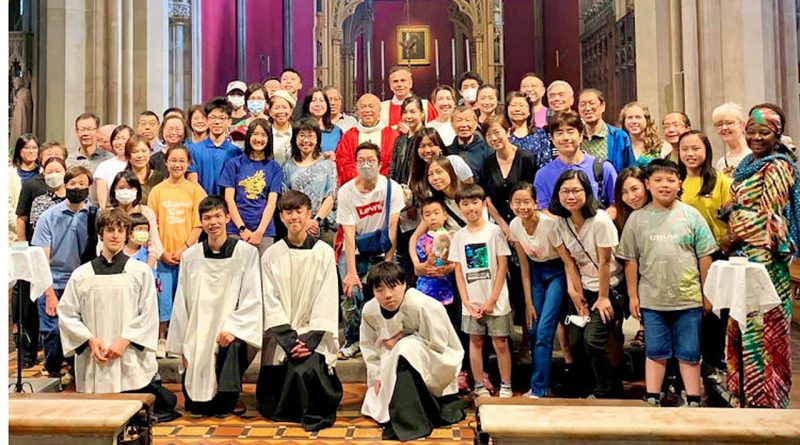 The Cantonese Congregation of Our Lady of Lourdes Sawston, St John Fisher Cambourne and Our Lady of the Assumption and the English Martyrs, Cambridge joined together in an uplifting Solemn Cantonese Mass on Saturday July 9, to commemorate the 120 Martyrs of China. Dominic Chung reports for the Diocese of East Anglia.

Canonised by St Pope John Paul II in 2000, 120 Chinese priests and laity and non-Chinese missionaries died  for their faith between 1648 and 1930.

How fitting it was that the Universal Church was brought to life in a beautiful church that venerates Our Lady and commemorates the English Martyrs. We asked the Martyrs of China for their intercession, for God’s grace and love to be bestowed on the Catholic Church in Hong Kong and China.

Close to 110 were at the first Cantonese Mass ever held at OLEM in its 135-year history, including local non Chinese parishioners and Cantonese speaking Hong Kong Catholics all worshipping together.

The Liturgy and the Sacred  Music were the key focus of the occasion, with some in the Congregation so moved that they openly sobbed when we ended the Mass with a rendition of the Te Deum, in Cantonese .

It was also the first time that a Hong Kong born young Organ Scholar played on the magnificent OLEM organ and that the newly ordained Permanent Deacon, Gianluca Savino proclaimed the Gospel in Cantonese.

It was truly a memorable day.  The Cantonese Community felt very blessed and are humbled by the care and attention shown to them by Mgr Provost Eugene Harkness, Deacon Gianluca, Director of Music Nigel Kerry, and Canon Hoan Minh Nguyen for continuing to celebrate Mass in Cantonese, and even singing the notoriously intricate Doxology in Cantonese.

There was even an embryonic choir to call our own thanks to the brilliant assistance by a number of Hong Kong Catholics at the Westminster Archdiocese Chaplaincy of the Chinese Community at Bethnal Green.

As the congregation all returned  to their own parishes in Milton Keynes, in Hitchin, in Harrow and other parts of London as well as Cambridge and other places in Cambridgeshire, they would take with them “our love and prayers” as Mgr Eugene always says near the end of Mass.

We look forward to  welcoming them again on August 13, at 11am in Sawston.

Pictured are participants at the Cantonese Mass at OLEM in Cambridge.