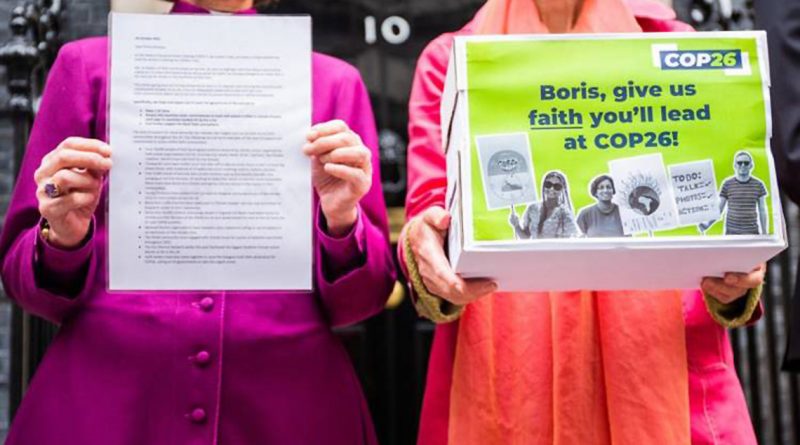 Calls from thousands of CAFOD supporters for Boris Johnson to show leadership at the ‘COP26’ climate talks have been passed to Number 10 by senior faith leaders.

The representatives from Christian, Muslim, Jewish, Buddhist and Hindu groups have delivered a message to Downing Street on behalf of faith communities which included demands for action from parishes and schools across England and Wales.

The message from the faith leaders told the Prime Minister he has “a unique position to lead the world in tackling the climate crisis” with the Glasgow summit less than two weeks away.

The faith leaders’ statement noted that people of faith around the UK have called on the Prime Minister to push for agreements to keep temperature rises below 1.5C, ensure rich countries meet and exceed promises to provide $100bn each year to countries hardest hit by the climate crisis and end further support for fossil fuels.

The statement referred to the thousands of people who have signed petitions, held online meetings with MPs as part of CAFOD’s ‘Parliament in your Parish’ initiative and reminded Boris Johnson that the ‘eyes of the world’ are on him as Prime Minister of the country hosting COP26.

More than 10,000 people have signed CAFOD’s petition urging the Prime Minister to push world leaders to show ambition and keep temperature rises below 1.5 degrees, while more than 33,000 young people have designed ‘eyes of the world’ illustrations to send a message that the world is watching Mr Johnson in the run-up to Glasgow.

Liam Finn, Campaigns Manager at CAFOD, said: “We’d like to thank the thousands of Catholics and people from across faith communities who’ve sent an unequivocal message to Boris Johnson that he has to show leadership at the COP.

“The fight to tackle the climate emergency won’t end in Glasgow, but the COP is a vital moment for us to get on track to ‘keep 1.5 alive’ and prevent our sisters and brothers in vulnerable communities facing even more catastrophic consequences for a crisis they’ve done least to cause.

“That’s why the Prime Minister has to make sure the people living in communities on the frontlines of the crisis are put at the heart of COP26, rather than being treated as an afterthought by decision makers, as Pope Francis warns is too often the case.”

The faith leaders’ visit to Downing Street was organised by CAFOD alongside SCIAF, Christian Aid, Tearfund, World Vision and Faith for the Climate.

The visit was part of a series of more than 350 ‘Faiths 4 Climate Justice’ initiatives taking place in 30 countries around the world. More than 200 senior faith leaders and 50 religious groups representing more than 50 million members took part in the events urging urged world leaders to act.

Join thousands demanding action at COP26 in London on 6 November