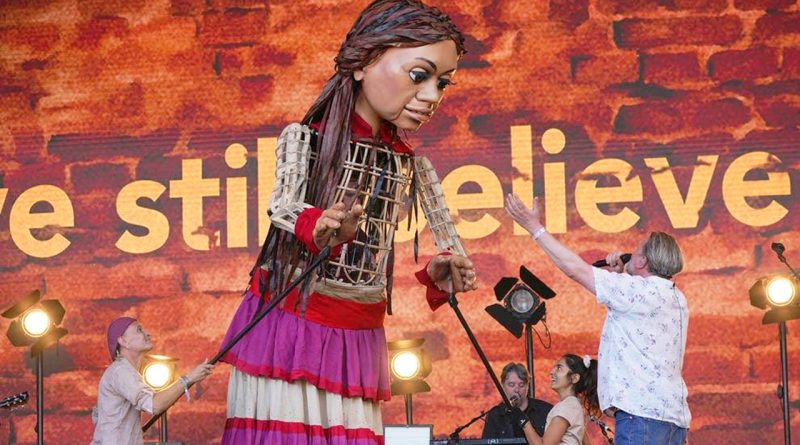 Glastonbury favourites Elbow moved fans to tears as they performed in the sunshine at Worthy Farm on Sunday afternoon. The Bury-formed band had festivalgoers ‘blubbing ‘as they were joined on stage in Somerset by the Citizens of the World Refugee Choir and Little Amal, a giant 11.5ft puppet of a 10-year-old Syrian refugee representing displaced children.

Little Amal, whose name means hope in Arabic, is known for her epic 4,970 mile journey from the border of Syria and Turkey to the UK last year. In May Little Amal travelled to Lviv in Ukraine and to three cities in Poland to visit Ukrainian refugee children and families forced to flee their homes.

The rock band from Bury, Manchester, sang their hit One Day Like This alongside Little Amal and members of the Citizens Of The World Choir, a group of 50 singers from over 30 countries which was founded in 2015 in response to the Syrian refugee crisis.

After a tour around England this month, 3.5m (11ft) tall Amal was walked around the stage before finishing the song holding hands with frontman Guy Garvey, who is Catholic.

Ukrainian Citizens Of The World singer Anna Vryzhan, who is originally from Mariupol, a city that sustained heavy bombardment during Russia’s invasion, left her home country in early March and said she will “never forget” being on the Pyramid Stage at Worthy Farm.

“I don’t have the words, I just have emotions to cry and scream – thank you so much for this experience, I will remember it forever,” the 28-year-old told the PA news agency.

Aref Hussaini is Afghan but grew up in Pakistan and is part of a community that has been persecuted by the Taliban.

The 23-year-old said after his performance: “I can’t believe what I’ve done and how far I came with this choir.

“Until next year, until I’m (not) alive I think I will show off about what I’ve done today.”

After the final round of the lyrics “throw those curtains wide, one day like this a year will see me right”, a message was transmitted on the large screens either side of the stage offering information on the Citizens Of The World choir, who also performed on Sunday morning on the Avalon stage.