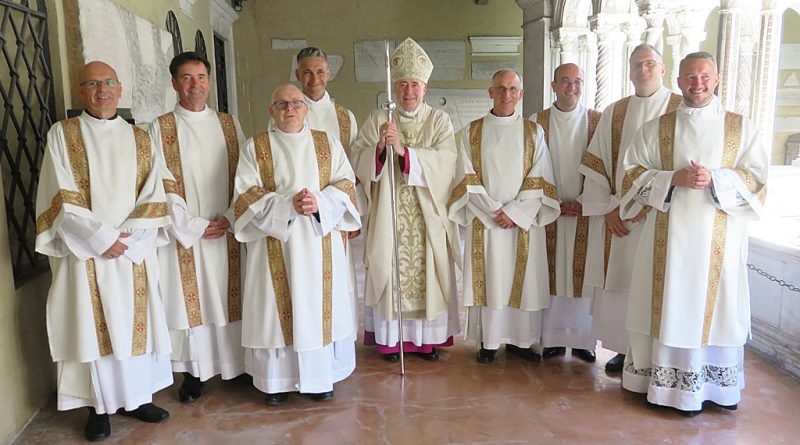 Eight Third Year Beda students have been ordained deacon in the Basilica of St Paul’s outside the Walls by Bishop Mark Davies, Bishop of Shrewsbury. The new deacons re for the following dioceses: Southwark, Shrewsbury, Derry, Down and Connor, Killala, Leeds, Stockholm and Westminster.

The deacons were joined for the ceremony on Wednesday by family, friends and other representatives, and the College offered its “congratulations to all the new deacons and thanks to everyone who helped to make this such a special occasion. Ad Multos Annos.”

The College has posted 100 pictures from the event here

About the Beda College

The Beda College is a seminary situated in Rome for the formation of priests for dioceses and congregations. Operating under the guidance of the Bishops’ Conference of England & Wales the college currently has students from more than 10 countries,

In 1852, Pope Pius IX approved a plan to accommodate in Rome a number of clergymen from England who had joined the Catholic Church from other Christian denominations and wished to prepare for the Catholic priesthood.

For over 100 years this was to remain the typical composition of the student body, ensuring that the Beda would become the world’s best-known College for “late vocations” – training men who had already followed widely differing careers.

The College entered a period of renewal at the turn of the century when, as a result of the interest taken by Pope Leo XIII, a new constitution was issued in 1898. The Pope decided that the College should be placed under the patronage of the Venerable Bede, the eighth-century author of Ecclesiastical History of the English People, to whom the Pope had a personal devotion.

In the following year he was to raise St Bede to the dignity of Doctor of the Church and the name “Pontificio Collegio Beda” originates from this time.

The Beda developed its own system of priestly formation, based on a unique four-year course of studies conducted in English. This took shape in the 1930s and 1940s, while Monsignor Charles Duchemin was Rector. The College was evacuated to Britain in 1939 for the duration of the Second World War and by October 1947, the Beda had returned to its home at 67 Via di S. Nicolo da Tolentino, near the Piazza Barberini. But by the mid 1950s, with large numbers seeking admission, the College had outgrown its premises.

In 1956 Pope Pius XII provided from Vatican property the land on which the present modern Beda stands, adjacent to the Basilica of St Paul Outside the Walls. Pope John XXIII formally opened the new building on 20 October 1960, since when the College has continued to develop on this site up the present day.