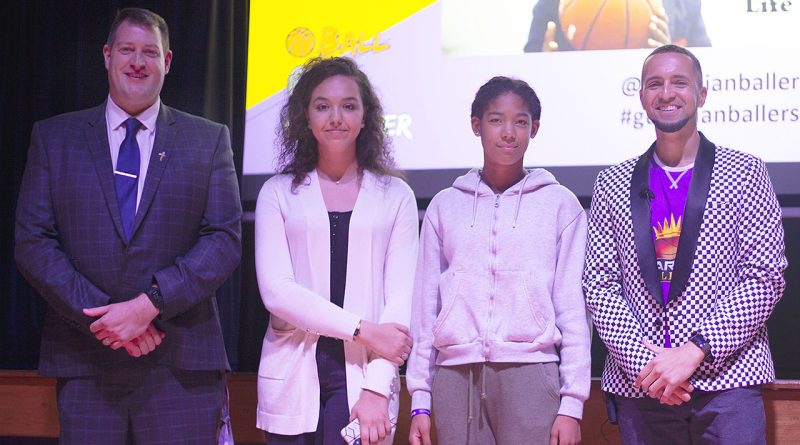 A film showcasing a service which is transforming the lives of young people across Coventry by using basketball to both empower them and encourage them to open up about their mental health has received a special premiere.

Guardian Ballers has released a film which shines a spotlight on its work with young people across the city, not only teaching them new basketball skills, but also how to cope with challenges in their lives which may have an impact on their mental health.

Guardian Ballers, a Coventry and Warwickshire Mind service, was launched in March 2021 by founding director Kieran Joseph who left a career in teaching to bring his vision of launching a service which uses sport to support school children with their mental health to life.

The film explores Guardian Ballers’ work with students at Cardinal Wiseman Catholic School – the very first school to work with the service – and Whitley Academy.

As well as taking a general look at the work done by the Guardian Ballers, the film focuses on five young people who share their stories and give an insight into just how much their lives have been changed thanks to the team behind the service.

The film was commissioned as part of the Community Connectors Programme which was launched by Coventry City of Culture Trust and 64 Million Artists to provide funding for creative projects which benefit areas of Coventry during its time as the UK City of Culture.

Kieran then enlisted the services of Ryan and Sara Ormes of RS Creative Solutions to produce the film.

A special event was held to premiere the film at Cardinal Wiseman Catholic School’s new 288-seater theatre where guests were able to watch the film on the big screen before taking part in a question-and-answer session with Kieran and others involved.

“It shows how something that came from an idea is now completely transforming the lives of young people right across Coventry.

“It gives a fantastic overview of the programme while focusing on a diverse group of five individuals, with filming taking place in their schools, neighbourhoods and homes to give a 360-degree picture.

“We have reached 900 young people aged between 11 and 18 since launching in March and are now working with nine schools, providing a programme which links sport with mental health awareness and giving students a space where they can talk openly about their emotions, and that number is only set to grow.

“Holding the premiere at Cardinal Wiseman was very special – they were the first school to allow us to deliver sessions to students, and we’re so pleased that many more schools have followed in their footsteps.

“We received a huge amount of positive feedback at the event – everyone was spellbound by the film and we also heard from some young people who spoke about what Guardian Ballers means to them which was an incredible highlight, as although we’ve now worked with hundreds of students it’s important to remember that it’s the individuals who are at the heart of our programme.

“Since the film’s release, the creative artistry of producers Ryan and Sara has been praised by many who have commented on how the film captivates an audience through their story-telling gift.”

Matthew Everett, Principal of Cardinal Wiseman Catholic School – part of the Romero Catholic Academy, said: “We were delighted to host the premiere of ‘Guardian Ballers Life Stories’ as the very first event in our new theatre.

“At Cardinal Wiseman we focus on developing the whole child, which includes promoting positive mental health and providing our students with the tools to enable them to be resilient.

“This is why our work with Guardian Ballers has been so important. Kieran and the team deliver fantastic sessions which not only focus on how sport can improve mental health and wellbeing, but also encourage students to talk openly about their feelings and emotions.

“The film provides a real insight into just how much of an impact they are having, and we look forward to continuing to work with the team going forwards.”

The film can now be viewed online at https://youtu.be/eFXVptWLU1A