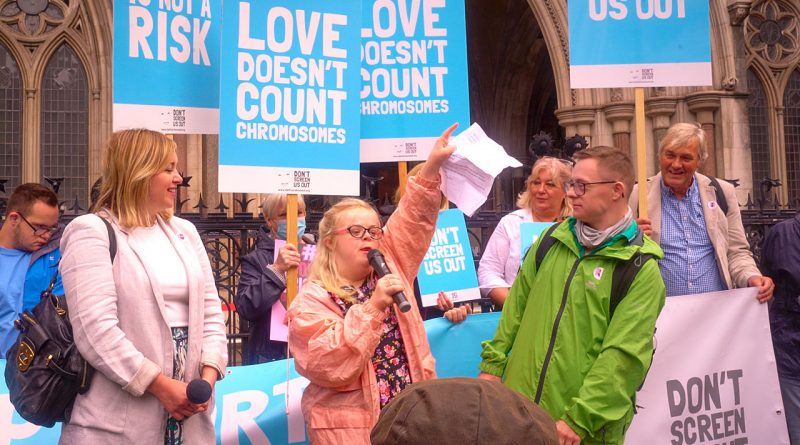 The High Court in London rejected on Thursday a landmark challenge to a U.K. law allowing abortion up to birth for disability.

In its 23rd September ruling, the court declared that a law allowing abortion up to birth for disability was not discriminatory.

The challenge was brought by Heidi Crowter, a woman with Down syndrome, and Máire Lea-Wilson, a mother whose son has Down syndrome.

Speaking after the verdict, Crowter, a 26-year-old from Coventry said: “I’m really upset not to win, but the fight is not over. The judges might not think it discriminates against me but I’m telling you that I do feel discriminated against.”

Lea-Wilson, a 33-year-old from West London, said: “People with Down syndrome face discrimination in all aspects of life. This ruling condones discrimination by cementing the belief in society that their lives are not as valuable as the lives of people without disabilities.”

“I do not regret bringing this case because I believe it has helped raise awareness around the wonderful lives of people with Down syndrome and their families’ lives,” she added, “and helped to dispel some of the negative, outdated, and prejudiced attitudes that are prevalent in society and the medical profession.”

“As Aiden’s mother, I will continue to fight and I will look to appeal this judgment with Heidi because everyone should be equally valued regardless of the number of chromosomes that they have,” Lea-Wilson said.

Section 1(1)(d) of the the UK Abortion Act 1967 permits abortion up to birth if “there is a substantial risk that if the child were born it would suffer from such physical or mental abnormalities as to be seriously handicapped.”

There were 3,083 abortions on the basis of disability recorded in England and Wales in 2020, 693 of them following a prenatal diagnosis of Down syndrome – an increase from 656 in 2019.

Jason Coppel, a senior barrister representing Crowter and Lea-Wilson, told the High Court in July that Crowter had been “the subject of abuse because of her disability and believes that the existence of a law allowing abortion up to birth for babies with DS [Down’s syndrome] is a contributory cultural cause of this type of abuse.”

The claimants, who are supported by the group Don’t Screen Us Out, have crowdfunded more than £150,000 for the case.

Lea-Wilson said in May that she was inspired to take part in the case after seeing Crowter discussing the law on television.

She said that the disability rights campaigner’s words resonated with her following the birth of her second son, Aidan, in June 2019.

“I had discovered that Aidan would likely be born with Down syndrome when I was 34 weeks pregnant, and then was asked repeatedly if I wanted to terminate the pregnancy,” she told the Catholic News Agency.

“Suddenly the way I was treated changed from an excited parent expecting a second child, to a woman facing a great tragedy who had to make a ‘choice’ — to abort my pregnancy or not.”

“I have two sons who I love and value equally, so I cannot understand why the law does not value them equally.”

Speaking to supporters outside the High Court on 7th July, Crowter said: “The judges need to know that we are not suffering and our parents and family don’t suffer. The doctors need to hear this, they need to hear from people like me and learn more about life with Down’s syndrome.”

“My fight for justice and equality has brought us here today to change a law that makes me think I shouldn’t have been born.”

“When the law changes for us then we will have won the fight.”