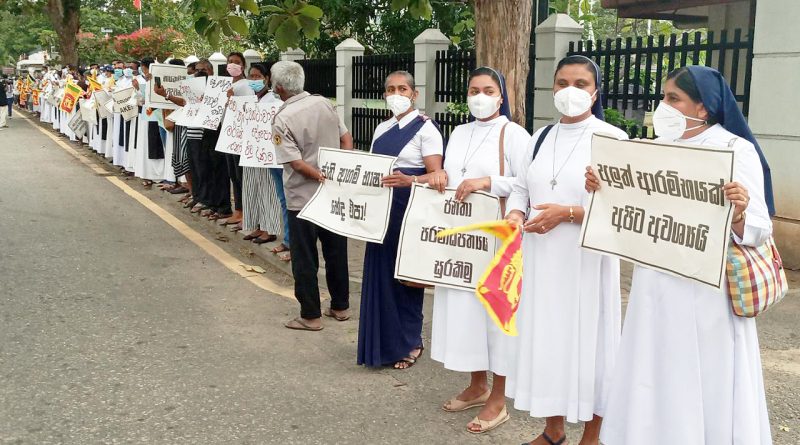 Sri Lanka is facing its worst economic crisis since independence from the British in 1948, which has led to widespread – and so far largely peaceful – demonstrations across the country.

The price of food and fuel has rocketed over recent months in Sri Lanka. End of term school examinations have been cancelled for 3.5 million school children due to shortages of paper and ink, and a lack of foreign reserves to finance imports.

Jehan Perera from the National Peace Council of Sri Lanka – a partner of the UK aid agency CAFOD – explains what has sparked the protests: “The decisive factor in the pendulum swing of public opinion has been the severe economic hardships of the past few months. The collapse of the Sri Lankan rupee in relation to foreign currencies, the steep escalation in prices of essential commodities coupled with severe shortages and the long hours of electricity power cuts.”

Perera describes the protests as “spontaneous without a central organiser or committee,” and those taking part from “all walks of life”.

Just over two years ago Gotabaya Rajapaksa was elected President of Sri Lanka on the tide of a popular vote with a massive majority. The anger of the current protestors is rooted in the breakdown of systems of accountability and belief that government leaders – the President, his brother the Prime Minster, Mahinda Rajapaksa, and their families – have looted the economy.

Perera continues: “The government’s failure to either address the problem or to present a solution to them has led to a continuation of the protests. There appears to be a consensus that the country is facing this plight due to mass scale robbery of government funds.”

Perera explains that the shortages have not suddenly happened, in November last year there was cooking gas shortages which reached crisis point last month (March) swiftly followed by a petrol and diesel shortage. The ban on chemical fertilisers led to a big drop in agricultural production and a hike in food prices, which has pushed many families to the brink of coping.

“The price rises were compounded by shortages of imported products, particularly stressful was the shortage of imported milk powder which is a staple for children. Things worsened when the dollar was devalued in March sending the price of fuels and food skyrocketing by 50-100 per cent.”

Mary Lucas, CAFOD’s Country Representative for Sri Lanka, adds that the conflict in Ukraine is also having an impact on Sri Lanka’s economic turmoil.

“Sri Lanka exports 18 per cent of its tea to Ukraine and Russia, and it imports 45 per cent of its wheat from Ukraine. What is happening in Sri Lanka may be under the radar here, but it points to how interconnected and impacted by world events we all are.”

The Catholic Cardinal of Colombo, Malcolm Ranjith, joined protesters on the streets last weekend along with many other bishops, priests, and nuns.

“What the Church is really concerned about is that people should stand together in solidarity. So, they are organising a ‘Silent Solidarity Campaign’ – for people to stand together and pray for the good of the nation,” said Mary Lucas.

The National Peace Council mobilised its district inter-religious committees, including the Colombo committee, to participate in the campaign that took place in all dioceses in the country.

Lucas also went on to explain how the Church is developing an emergency preparedness plan to respond to the needs of the most vulnerable families.

“Firstly, Caritas Sri Lanka is working to adapt its current development work, so that people can grow food or earn money to buy food. Secondly, it predicts a food crisis in the coming months with soaring prices. As a safety net for the poorest people, it proposes to start food banks to collect basic food items for distribution at times of crisis.”